Only eight of the 22-car field actually crossed the finish line due to a huge crash involving Canadian driver James Hinchcliffe at an IndyCar race in Fort Worth, Texas, on Saturday night. 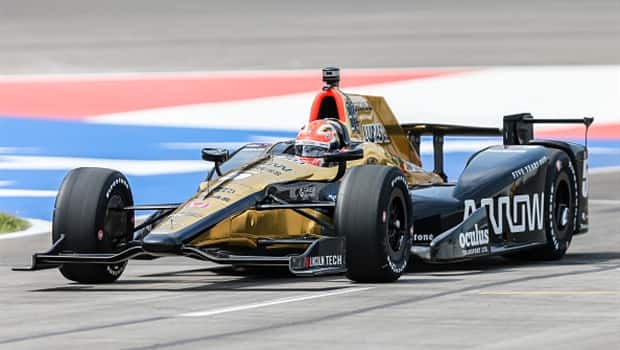 3 years ago
1:14
The Canadian was part of an eight-car crash Saturday night at Texas Motor Speedway which ended his day on the track. 1:14

Will Power was trying to figure out how to hold off Scott Dixon for the lead as the two went side-by-side in the closing laps of the IndyCar race in Fort Worth, Texas, on Saturday night.

Instead, Dixon got taken out in one last crash to end a wild race and Power won under caution. Only eight of the 22-car field actually crossed the finish line Saturday night.

Power, who led 180 of the 248 laps, was the leader when Dixon got wrecked by Takuma Sato, and finished ahead of Tony Kanaan, who other drivers and at least one owner blamed for a big crash earlier that led to a nearly 31-minute red flag.

"Apparently I got blamed for all of them," Kanaan said. "Got a penalty, paid a penalty, and we finished second."

Canadian driver James Hinchcliffe was caught at the centre of that crash and he also was penalized.

The final caution came when Sato, driving the same car in which he won the Indianapolis 500 two weeks ago and pushing for another win, got his left side slightly into the grass on the front stretch with five laps to go. That sent him spinning and also took out Dixon.

"It was a pretty intense battle there at the end with Scott," Power said. "I was kind of working out in my head how I was going to get him over the line because he was kind of able to side draft me and be ahead on some laps, so it was really going to be an interesting finish."

Simon Pagenaud was third, ahead of defending race champion Graham Rahal, who was coming of winning both races at Detroit last week to become the first IndyCar driver this season with multiple victories. Gabby Chaves finished fifth and Marco Andretti in sixth was the only other driver to finish all 248 laps.

With a full moon looming over the track, the red flag came out after an accident involving eight other cars that was blamed on Kanaan, who recovered from the ensuing penalty for his runner-up finish.

Hinchcliffe got loose on lap 154 after making contact with Kanaan, who appeared to move up the track into him.

That put Hinchcliffe in the middle of three-wide, and he made contact with his Schmidt Peterson Motorsports teammate Mikhail Aleshin.

While calling Kanaan someone he trusts on the track, Hinchcliffe said Kanaan drove from inside along the white line and up into him, and pushed him into Aleshin.

That led to a spark-spraying chain reaction that took out both Dale Coyne Racing drivers, Tristan Vautier and Ed Jones, and sent driver-owner Ed Carpenter and his teammate JR Hildebrand to the garage. Carlos Munoz and Ryan-Hunter Reay were knocked out of the race.

Carpenter, who took his repaired car back on track 12 laps down, also blamed Kanaan. Car owner Dale Coyne went up to Kanaan's car while it was lined up on pit road during the red flag, then leaned into the cockpit and said something.

After the race resumed, IndyCar penalized Kanaan for avoidable contact, holding him in his pit for 20 second during green-flag conditions.

All drivers involved in the crash were evaluated and released from the infield care centre.

IndyCar enforced two mandatory stops under caution after that for tire changes after 30 green-flag laps on each set. There was blistering of some tires on the fresh pavement of the track, including Helio Castroneves wrecking out earlier in the night.