IndyCar's virtual return to Michigan International Speedway mimicked the U.S. 500 at the start, when the current open-wheel racing stars mismanaged the green flag and triggered a spectacular crash.

Event opened with a spectacular crash to start the race

IndyCar's virtual return to Michigan International Speedway mimicked the U.S. 500 at the start, when the current open-wheel racing stars mismanaged the green flag and triggered a spectacular crash.

The accident in the opening seconds of the Chevrolet 275 iRacing event gave Saturday's latest event a throwback feel.

When CART fractured and IndyCar was born, the CART teams boycotted the Indianapolis 500 and instead raced at Michigan. The alternative 1996 race opened with a huge wreck that only punctuated the absurdity of the split in American open-wheel racing.

So when multiple cars crashed before even reaching the virtual start/finish line, IndyCar was briefly scrambling for the reset button. 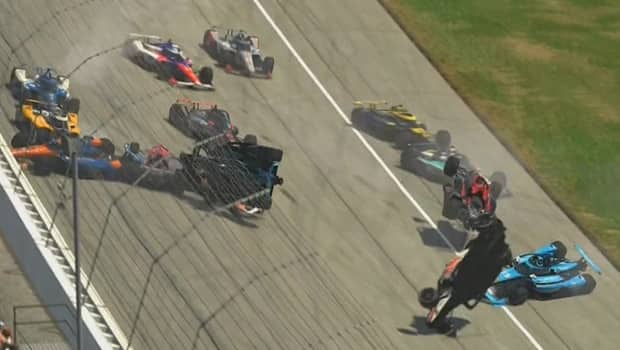 8 months agoVideo
2:06
Cars were flying all over the track as a bumpy start highlighted the IndyCar iRacing challenge. 2:06

"Stay with us, guys! Stay with us!" driver Conor Daly pleaded on his streaming service as iRacing officials sorted out the mess.

"It's going to be great. Once the McLaren cars have crashed," promised Daly.

The virtual cleanup took time as drivers lobbied race control to delay the green so they could finish their tow and rejoin the field. An official finally told them to be quiet.

"The show is more important than where you guys finish in the race. I'm sorry, we will debrief after the race," the drivers were told by an iRacing official, who added no more cautions would be called.

And so they tried again with the third round of this virtual racing series created to give IndyCar content during the sports shutdown from the coronavirus pandemic. IndyCar's season was suspended 48 hours before its scheduled opener.

Michigan marked the first oval track on IndyCar's virtual schedule and reigning Indianapolis 500 winner Simon Pagenaud won the race. IndyCar has not actually raced at Michigan since 2007, and only five of the drivers in the virtual return had ever raced the track before.

"This is the most stressful I've ever felt in a race car," Pagenaud said without a hint of sarcasm.

He competed wearing his actual firesuit and his wife handed him a bottle of congratulatory champagne as the Frenchman took the virtual checkered flag. 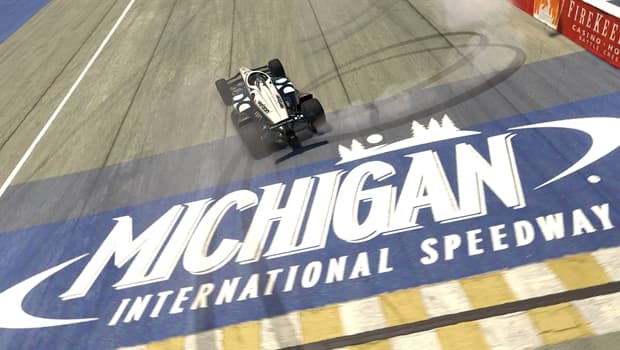 Robert Wickens was in the field for the second straight week after initial issues in getting him a simulator and steering wheel he could control with his hands.

Wickens injured his spinal cord in a 2018 crash and needed a special wheel to be able to participate. Max Papis' company sent him one that he was able to connect to use at Michigan for a 26th-place finish.

The race featured a a guest appearance from avid iRacer and new NASCAR Hall of Fame nominee Dale Earnhardt Jr., who lobbied for an invite and received one from IndyCar to join the field. As he slid in to his simulator for the race, broadcast live on NBC Sports, his gaming skills and experience at Michigan showed.

"I was trying at the end to hold off Dale Jr. — I never thought I'd say that," said McLaughlin, the Australian V8 SuperCars champion competing from a simulator in Brisbane at daybreak local time.

Earnhardt said he'd compete in an IndyCar iRace again, especially if its an oval, and he lobbied for both Daytona and Indianapolis.

NASCAR seven-time champion Jimmie Johnson did not play for the first week. Johnson entered the first two IndyCar events as he plans for future real IndyCar racing, but he's said he won't race ovals in an Indy car in real life — a sentiment that apparently carried over to his simulated car.

The field had a whopping 31 entrants, the most yet in this series, as Andretti Autosport got its full driver lineup into the race. Marco Andretti and Ryan Hunter-Reay made their IndyCar iRacing debuts Saturday, along with James Davison and Max Chilton, who stopped racing ovals in real life in the middle of last season.

Sage Karam won IndyCar's first iRacing event and led the most laps at Michigan but pitted from the lead for fuel with 14 laps remaining. Will Power inherited the lead but also had to stop, and Pageanuad pounced into the lead.