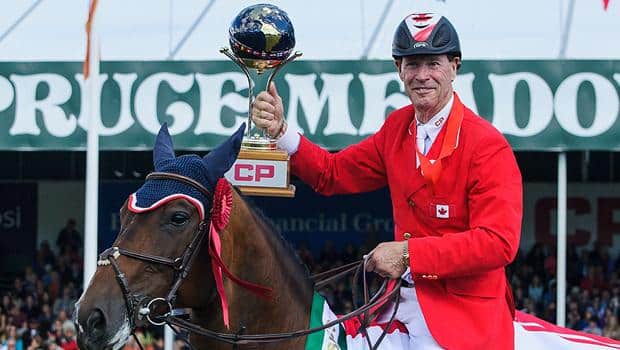 On Sunday, Millar stepped into the spotlight solo.

Millar, 67, forced a jump-off with 20-year-old Reed Kessler of the United States after a second clear round. Kessler, riding her 2012 Olympic mount Cylana, jumped clear in a time of 49.50 seconds before Millar guided Dixson to a clear round in 47.33 seconds to take the win.

"I can honestly tell you that I never thought I would win this Grand Prix again," said Millar, who claimed victory in 1987 and 1991.

"It was a long time ago and the sport has changed so much. I'm a little more mature than I was and these young people go plenty fast and they know all the tricks.

"They are really, really good. I have the greatest admiration for my fellow riders. To go up against them is no easy task."

'A heck of a payday'

Millar is ranked third on the all-time money won list at Spruce Meadows behind Eric Lamaze and Beezie Madden, with career earnings totalling more than $3.5 million.

"The afternoon just seems to fly by," Millar said. "It's like a blur, it happens so fast, the tension is incredible.

"To me, it is the most prestigious Grand Prix in the world. It's a heck of a payday.

"It's just a thrill. It is beyond words."