Canada shakes off early jitters to roar back against U.S. at world juniors

Alexis Lafreniere scored seven seconds after the United States tied the game late in the third period as Canada beat its North American rival 6-4 on Thursday in the opener for both countries at the 2020 world junior hockey championship.

Canada and the United States usually save their fireworks for later.

Huge goals, big saves, moments of both triumph and heartbreak have peppered the intense rivalry at the world junior hockey championship through the years.

With some deft hand-eye coordination and a sweet move in tight, Alexis Lafreniere wrote his own chapter Thursday.

The projected No. 1 selection at the 2020 NHL draft scored seven seconds after the U.S. tied the game late in the third period as part of a stunning four-point performance, lifting Canada to a wild 6-4 victory over its North American neighbour in the tournament opener for both countries.

"He's unbelievable," said Canadian captain Barrett Hayton, whose two power-play goals came on Lafreniere setups. "He brings so many different facets out there. It's underrated. He brings a ton of energy. 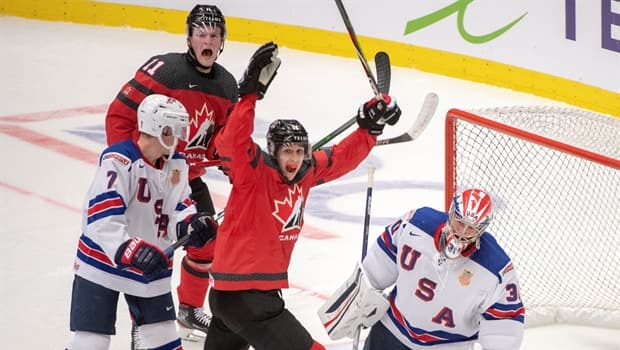 1 year ago
3:10
It was a back and forth affair as Canada and the United States traded big goals in a thrilling opening win for the Canadians. 3:10

Connor McMichael, Nolan Foote and Ty Dellandrea, into an empty net, also scored for Canada, which got 28 saves from Nico Daws in his international debut.

"He's an amazing player," McMichael added about Lafreniere. "The way he carried the team today and did the things he did was incredible."

After watching Shane Pinto bury his second of the night — and third goal on the man advantage for the U.S. with 3:18 left in regulation — Lafreniere responded in the blink of an eye to push his team back in front.

One of five returning players from the Canadian roster that finished a disappointing sixth at last year's under-20 event on home soil, the 18-year-old batted down an aerial pass by American defenceman K'Andre Miller before moving in alone and deking to the forehand on Spencer Knight.

"I got lucky to knock it down," said Lafreniere, who grabbed the crest on his jersey in celebration. "I just tried to get it to the net. I was lucky enough to put it in."

Nick Robertson, with a goal and an assist, and Arthur Kaliyev also scored for the Americans, who got 26 saves from Knight as their streak of 12 straight victories to open the world juniors came to an end.

"It's one game," said Pinto, who added an assist for a three-point night. "It's the beginning of the tournament, so we've just got to have a positive mindset."

The countries tend to face off later at the world juniors when placed in the same group — often on New Year's Eve — but instead met on Boxing Day in front of a pro-Canadian crowd of 8,963 that included hundreds of travelling fans at Ostravar Arena.

"The atmosphere was unbelievable," Hayton said. "It felt like we were almost in Canada."

In Group B's early game, the host Czech Republic upset Russia 4-3. Next up for Canada is Saturday's tilt with the Russians, while the U.S. goes right back at it Friday versus Germany.

Down 2-0 after the first, the Canadians came out flying in the second with three goals in just over 10 minutes.

McMichael got things started for the 17-time gold medallists at 3:31 when he took a pass from Akil Thomas off the rush and beat Knight.

Hayton, who was loaned to Canada for the tournament by the Arizona Coyotes, tied it on a power play at 6:34 when Lafreniere found him for a one-timer just seven seconds after Pinto, a second-round pick of the Ottawa Senators, went off for holding.

Foote, whose father Adam won two Stanley Cups with the Colorado Avalanche and also captured gold at the 2002 Olympics, gave Canada its first lead at 13:03 on another man advantage.

"We just tried to keep it simple and get pucks to the net," said Lafreniere, who leads the Canadian Hockey League with 70 points in 32 games this season. "That worked out pretty good. Our power play was good. We've got to keep working, keep getting better."

Pinto appeared to score the Americans' third power-play goal in three chances late in the period, but time expired before the puck entered the net.

'That was really fun'

Daws made a couple big stops in the third to keep his team ahead before Hayton found the back of the net on another power play on another slick Lafreniere delivery at 10:47 to make it 4-2.

But Robertson, a Toronto Maple Leafs' prospect, got the U.S. back within one with 7:45 left in regulation. Pinto then tied it with the Americans' third with the man advantage to set the table for Lafreniere's heroics.

"That was really fun," McMichael said. "You can tell we had a lot of nerves in the first period, but we got back to our game in the second and third."

Canada, which according to the website eliteprospects.com is icing its youngest-ever roster at the world juniors with an average age of 18.6 years, found itself in an early hole.

Pinto opened the scoring on a deflection at 3:10 with Hayton in the box as Canadian fans were in the process of passing a giant flag across the lower bowl.

Canada started to get going midway through the period with an energetic shift capped by hulking six-foot-six defenceman Kevin Bahl using a 10-inch height advantage to lower the boom on Bobby Brink.

But the Canadians didn't really threaten Knight's goal, and the U.S. doubled its lead with 1:28 left in the first on a power play when Kaliyev found the range.

Canada, however, would respond in impressive fashion.

"It's that kind of a tournament," Hayton said. "You get those swings. You have to stick with it."

The U.S. came in having won four straight and six of its last 11 against Canada after picking up just two victories — albeit in the 2004 and 2010 gold-medal games — in the countries' 10 previous meetings dating back to 2000.

While none of the players on the ice Thursday had ever suited up against one another on this stage, there's plenty of familiarity at lower age groups, including at the under-18 worlds and the annual Hlinka Gretzky Cup summer showcase.

One of the players with zero familiarity is the undrafted Daws, who came out of nowhere with a banner start to the his junior season to grab the starting job despite having never played for Canada before Thursday.

"A crazy first international game for me," Daws said. "It was special."