Alexis Lafreniere will be in the lineup when Canada meets Slovakia in the quarterfinals of the world junior hockey championship Thursday.

Projected No. 1 pick hurt knee during blowout loss to Russia

Alexis Lafreniere started by weaving back and forth on the edges of his skates.

Next up was a series of twists and turns as he continued to test what is, at this moment, Canada's most famous knee. Not long after that, he was taking part in drills with his teammates.

And while there was no immediate confirmation following practice, it was pretty clear the projected No. 1 pick at the 2020 NHL draft was nearing a return that didn't seem likely as he grabbed the joint in agony during an embarrassing 6-0 loss to Russia over the weekend.

A couple hours later the official word came down — Lafreniere would be in the lineup for Thursday's quarter-final matchup with Slovakia at the world junior hockey championship.

"It's pretty shocking," Canadian centre Ty Dellandrea said before the star winger was given the final all-clear. "To make a turnaround this quick and be back and skating like he was, we're all excited."

Lafreniere, who was not made available to reporters as he consulted with the national program's medical team, fell awkwardly and twisted his left knee as he cut to the net early in Saturday's second period against Russia. 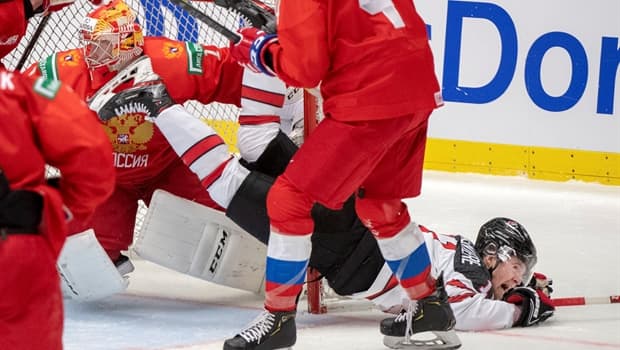 10 months ago
1:12
Team Canada forward Alexis Lafreniere needs to be helped off the ice after a collision during the 2nd period of Canada's game against Russia at the world juniors. 1:12

He had to be helped to the locker room, but watched practice the following day without a brace or noticeable limp

"At first glance there on Saturday night, it didn't look good," said assistant coach Mitch Love. "He's an elite player. He was having a good tournament to that point.

"We're all hands on deck with where we're at right now."

The Canadians beat Germany 4-1 and the Czech Republic 7-2 to top Group B minus Lafreniere, but getting the reigning CHL Player of the Year back for the medal round is a huge boost.

The 18-year-old from Saint-Eustache, Que., who scored the winner and added three assists in a tournament-opening 6-4 victory over the United States on Boxing Day, has 23 goals and 70 points in 32 games with the Rimouski Oceanic of the Quebec Major Junior Hockey League this season.

"He looked pretty good," Canadian forward Dylan Cozens said. "It's pretty scary every time you see someone go down. Then you find out where he was injured. It's tough to see, but seeing him back out on the ice this quick, it's a positive sign."

Pep in his step

The always-energetic Lafreniere might have had even more pep in his step Wednesday with the knowledge he was on the cusp of getting back into the under-20 tournament.

"It's a huge boost," Dellandrea said. "He's an unbelievable player and means a lot to our team. He's close to everybody on the team. He just brings our group together."

"He got injured, but he was still doing all that kind of stuff."

There might have been a temptation to hold its top talent out against the Slovaks — clearly the weakest of the eight teams still vying for gold — and save him for a potential semifinal rematch with Russia, but Canada and Lafreniere's camp were clearly comfortable he isn't risking further injury by returning now.

"He's an unbelievable player ... a game-changer," Cozens said. "Every time he's on the ice he's a threat."

The Canadians, who lost to Finland at this stage of last year's tournament on home soil, were saying all the right things ahead of Thursday — Bahl suggested it will be a "war" — but the 17-time champions should roll over a team that beat lowly Kazakhstan 3-1 before getting outscored 21-5 over its next three outings in Group A.

"We expect them to come out hard," Cozens said. "It's an elimination game. They're not going to go down easy. We know that."

"We're expecting a tough game," Canadian captain Barrett Hayton added. "They're good in their structure. They work hard. It's going to be a battle. It's an elimination game. Everyone's fighting for their lives. We've got to be ready."

One player Canada won't have to worry about amping up is Lafreniere.

"The biggest thing that stands out to me is just his love of the game," Dellandrea said. "He loves being at the rink. When he's not at the rink he's thinking about hockey or watching other games. He brings a joy to our room."

Three more wins, and he'll bring joy to the country.