Women's professional hockey, already in upheaval, is facing the economic impact of the COVID-19 pandemic. Jayna Hefford, the leader of the Professional Women's Hockey Players' Association (PWHPA) remains undaunted in her quest to navigate women to the league they desire.

Women's professional hockey, already in upheaval, is facing the economic impact of the COVID-19 pandemic.

Jayna Hefford, the leader of the Professional Women's Hockey Players' Association (PWHPA) remains undaunted in her quest to navigate women to the league they desire.

The roadmap is murkier, however, because of a virus that's pushing hockey down the list of society's priorities at a time when women's hockey is striving to raise its profile.

Hefford hopes the clout the PWHPA and its players cultivated this past winter isn't for naught.

"Women's sport is certainly going to suffer because of this, and simply because I think there was so much momentum in our sport and in others as well," the Hockey Hall of Famer told The Canadian Press on Monday.

"We're still in a place where the investment needs to be made. It's going to be harder and harder to get that investment in the current situation."

After the Canadian Women's Hockey League (CWHL) folded just over a year ago, roughly 200 players in women's hockey formed a collective.

Their goal is a financially sustainable league that provides regular ice time, health insurance and other supports.

The players that include stars Kendall Coyne Schofield, Hilary Knight, Marie-Philip Poulin and Natalie Spooner have shunned the U.S.-based NWHL, now reported to be expanding into Toronto.

To connect with fans and show their commitment to their cause, PWHPA members played in showcase tournaments and exhibition games in Canada and the U.S. from September to March in the Dream Gap Tour.

A tournament scheduled March 4-7 in Tokyo was cancelled because of COVID-19, but a tournament in Tempe, Ariz., the same weekend was the tour's finale.

The union wasn't able to secure a television deal, but arranged for live Internet streaming of games.

"It may be a little bit more challenging, but I do believe we'll still have those partners by our side and supporting us," Hefford said.

But the league the PWHPA envisions has the NHL running it.

The NHL and some of its clubs gave women's hockey increased attention and support this past winter. The league incorporated 20 PWHPA players, as well as former players Hefford and Cammi Granato, into its all-star weekend. 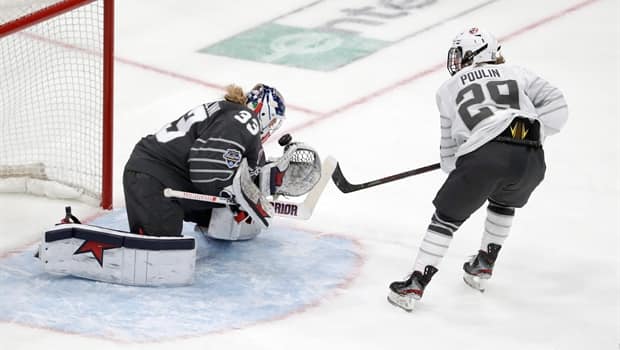 There were also reports the NHL has developed a template for a women's league, although commissioner Gary Bettman's stated position is the NHL won't get involved while a women's league is still operating.

The NHL is now preoccupied with the pandemic's impact on its own operations, however.

"We continue to want to work with NHL partners and with the NHL," Hefford said. "They have so many challenges on their own plate. They're going to have to figure those out first as their priority.

"I think that's where this is going to slow us down in where we were hoping we would be next season."

Time to plot next steps

Hefford has more time to plot the PWHPA's strategy for 2020-21 than she did last year, when she was named the union's lead operations consultant a month out from the first showcase tournament in Toronto.

"Last season was really just thrown together so last minute," the four-time Olympic gold medallist said. "It was incredibly successful on our end, we felt like, and we pulled it together.

"Being able to make strategic decisions and have some time to plan, that's a really appealing thing for us, but it's also difficult because no one is committing to anything at the moment."

Hefford was unconcerned by a recent report of the five-team NWHL expanding into Toronto.

"We've been very clear about what we believe the next professional women's league needs to look like," she said. "We don't believe those things currently are offered in any women's pro league.

"Ticketing, public relations and marketing, having access to daily ice time, full-time coaching staffs and medical staffs, strength and conditioning people and year-round medical and health insurance, a living wage, there's all these elements we believe that if we don't fight for them now . . . the time is now in our minds."