The United States claimed a fifth straight women's world hockey championship Sunday, edging Finland 2-1 in a shootout, after Petra Nieminen's goal in overtime was waved off.

Finland had game-winning OT goal waved off after lengthy review

The United States celebrated a women's world hockey title that the Finns thought was theirs Sunday in Espoo, Finland.

The U.S. claimed gold at a fifth straight world championship beating host Finland 2-1 in a shootout.

The Americans were up 2-1 in the shootout when goalie Alex Rigsby stopped Susanna Tapani for the victory.

"We rely a lot on our goaltenders, and clearly Alex Rigsby showed up in a huge way that we knew she was capable of doing," U.S. forward Hilary Knight said.

Annie Pankowski both scored in regulation and the shootout. Amanda Kessel also scored a shootout goal and Rigsby had 26 saves. 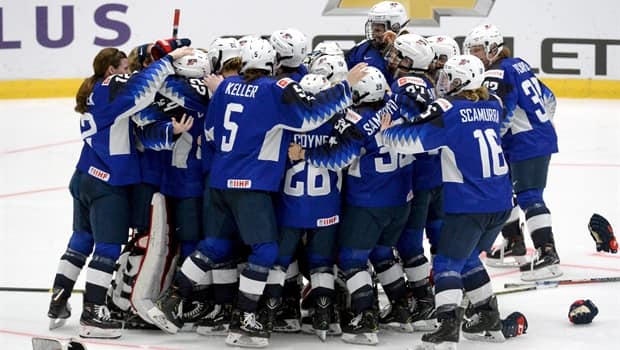 Finland goaltender Noora Raty made 50 saves a day after posting 43 in a 4-2 semifinal win over Canada.

Finland's captain Jenni Hiirikoski, who was named MVP of the tournament, scored in the shootout. Tapani scored in regulation. 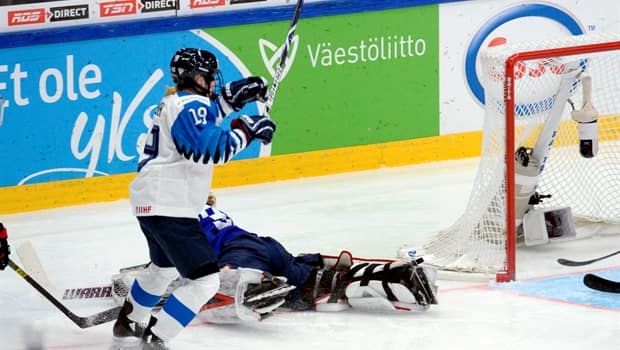 Finland celebrates hockey worlds victory but goal is waved off

Playing in their first final, the Finns celebrated what they thought was a golden goal by Petra Nieminen at 11:33 of overtime.

The team and the sold-out Metro Areena convulsed in joy, but the goal was waived off after a review that lasted several minutes.

Hiirikoski had made contact with Rigsby as she passed in front of the net. Nieminen had a near-empty net at which to shoot.

Hiirikoski wasn't assessed a goaltender interference penalty, but Rigsby was given a tripping minor, which wrinkled many brows in the arena.

"The referees on the ice had a different view on the situation than the video-goal judge," Nurminen said.

"Referees on the ice were giving a penalty to the goalie for tripping and they were allowing the goal.

"But when it goes to video review, the power and authority goes the video-goal judges. They saw it as goalie interference and made that decision.

"IIHF president Rene Fasel said it was a judgement call. If you show it to 100 hockey persons, some per cent say it was a goal and some say it wasn't."

"These are tough decision for the video goal judges. We have to respect their call."

So the American women's run of titles continues as they've now won eight of the last nine world championships.

They also beat Canada in a shootout for gold at last year's Winter Olympics in Pyeongchang, South Korea.

"We're trying to develop our younger players so they can step up and play big roles as our veterans phase out, making people comfortable all over the ice.

"But we have a really special group. I can't say it enough. It's really magical to be in our room and something we try to cultivate every single time we get together."

The U.S. and Finland had chances to end the game in overtime.

Knight hit the post during an American power play, while the Finns couldn't generate the equalizer on two power-play chances.

Sunday's championship game was the 19th in tournament history, but the first that didn't feature the United States and Canada battling for gold.

Raty said silver felt bittersweet because she and her teammates had already experienced what it felt like to win gold.

"I feel proud, I feel good and I also feel disappointed," Raty said. "I don't know how I feel. It almost would have been easier if we'd lost five nothing.

"I'd probably be happier right now. But we were so close. We could taste it 'holy cow we're world champs' and they take it away."