The head of the Professional Women's Hockey Players' Association says its hub-city concept isn't a counter to the NWHL's expansion into Toronto.

Three weeks after the U.S.-based NWHL declared its intent to ice a team in Canada next season, the PWHPA unveiled plans Wednesday to centralize players in five locations, including Toronto.

"If anyone thinks we could pull all this together in a week or two, that's a pretty strong assumption," PWHPA operations consultant Jayna Hefford told The Canadian Press. "This has been in the works for us for a number of months.

"We are not reactionary to anything that's going on in the women's hockey landscape. We're trying to do what's best for our players."

The roughly 200 players that formed the PWHPA when the Canadian Women's Hockey League folded last year refuse to play in the NWHL.

That group, which includes stars Kendall Coyne Schofield, Marie Philip-Poulin, Hilary Knight and Natalie Spooner, don't believe the NWHL can provide the professional environment they envision for themselves. 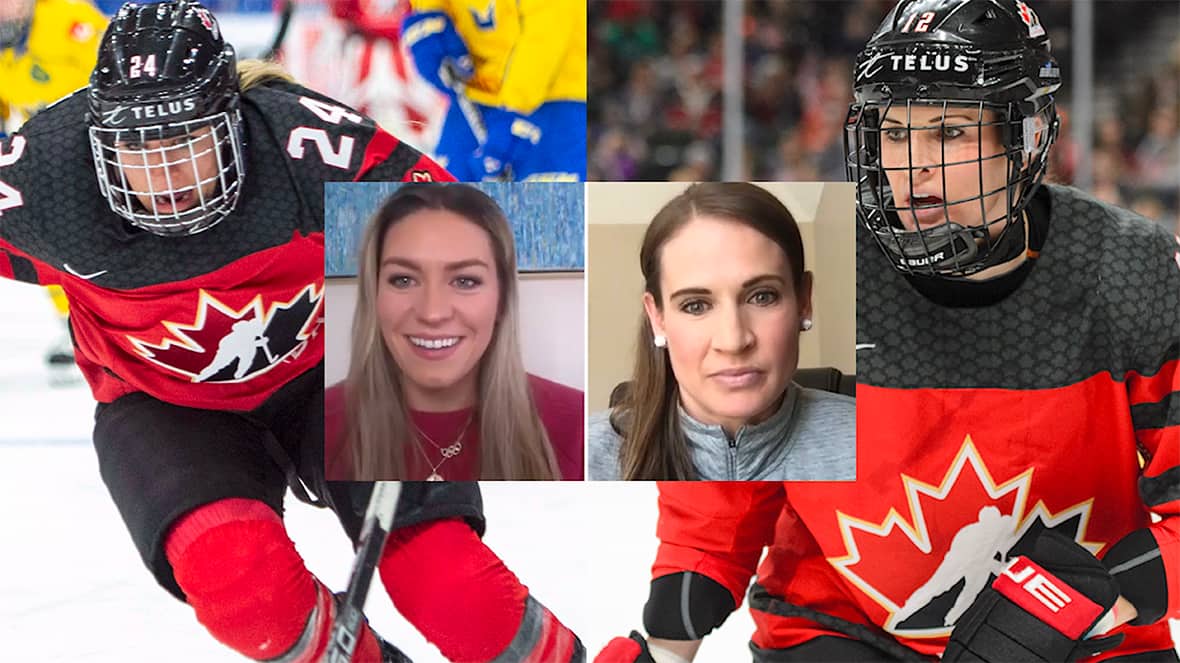 10 months ago
2:40
Canadian hockey Olympic gold medallists Natalie Spooner and Meaghan Mikkelson shared their thoughts on the NWHL and where they stand on women's hockey as a whole. 2:40

PWHPA members played in a series of Dream Gap Tour tournaments and exhibition games in North America this past season. The NWHL was a five-team league in its fifth year of operation.

Groups of 25 PWHPA players will be based in New Hampshire, Minnesota, Toronto, Montreal and Calgary, where they will have access to regular ice times, dressing rooms, strength and conditioning facilities, support staff and coaches.

"One of our main goals is to provide the most professional environment we can for our athletes," Hefford said. "Although we don't pay them, we do our best to provide them the resources that professional athletes would have, simple things like dressing rooms and laundry service and equipment managers.

"It doesn't cut anyone out of the association just because you don't live in one of those hubs, but by condensing it, it allows us to really target those areas and provide the best possible resources for those groups."

The Montreal hub will be at the high-performance centre at Verdun Auditorium, Hefford said. The Toronto and Calgary locations have yet to be determined.

WinSport, where the Canadian women's team centralizes for Winter Olympics, is the preferred location in Calgary, she said.

A second Dream Gap Tour is in the works for 2020-21, but the COVID-19 pandemic is hampering plans.

"It's so challenging because it's not knowing if you can put athletes on a bus in the fall, can we cross a border, can we be in facilities and can we play five-on-five games?" Hefford said.

"This is all stuff that's up in the air."

The NHL Players' Association was a backer. NHL teams such as the Toronto Maple Leafs, Arizona Coyotes, Philadelphia Flyers and Washington Capitals were involved in some Dream Gap Tour events.

"We'll continue to build relationships with NHL club teams, but until the NHL figures out their direction on the rest of their season I think they deserve the time to figure that out," Hefford said.

The Hockey Hall of Famer from Kingston, Ont., is banking on the PWHPA's corporate backing remaining intact despite the pandemic.

"We continue to believe they're really invested in what we're trying to do and they want to be a part of the solution," she said.

"I hope they'll all be back and we certainly feel pretty positive about that, but I can't say with one hundred per cent certainty yet."