Turning down an offer to play for the NWHL's Toronto Six was difficult for Kristen Richards. Refusing that opportunity means Richards will compete against national-team players for inclusion on the Professional Women's Hockey Players' Association's Toronto roster.

Cities such as Toronto present multiple options with NWHL, PWHPA

Turning down an offer to play for the NWHL's Toronto Six was difficult for Kristen Richards.

The 27-year-old Toronto teacher was tempted by a guaranteed spot on a quality women's hockey team, plus the chance to earn a few thousand dollars. Refusing that opportunity means Richards will compete against national-team players for inclusion on the Professional Women's Hockey Players' Association's Toronto roster.

"I wrote this when I was introduced to the idea of potentially going to the NWHL," Richards told The Canadian Press. "I didn't know what my best choice would be. I'm older. I'm in a full-time career.

"What I came to terms with was the idea that there's more for our game. I feel what the PWHPA is fighting for is more my view on what professionalism is."

Richards believes there's room for both entities in the women's hockey landscape, however.

"What we forget about along the way is any opportunity in women's sport right now is a good one," she said. "Why are we women forced to say that we only deserve one league after all of this?"

"I do think they can co-exist," Hefford said. "The challenge is in the messaging really because it's not entirely clear that all the top players are part of the PWHPA.

"When you look at men's hockey, everybody knows the best players play in the NHL. It doesn't seem confusing on the men's side that there's multiple professional leagues.

"To put it in laymen's terms, there's McDonald's and there's Burger King. They do the exact same thing. Are they pressured to be one company?"

Almost 200 players formed the PWHPA after the Canadian Women's Hockey League folded in the spring of 2019.

The biggest names in the women's game are involved in the PWHPA — Hilary Knight, Kendall Coyne Schofield, Marie-Philip Poulin and Natalie Spooner to name a few.

Their goal is a league that pays them enough to be full-time professional players, and that offers the same competitive, medical and insurance supports the male pros get.

The union organized showcase tournaments and exhibition games under the Dream Gap Tour banner this past winter.

The U.S.-based NWHL, which ran a 24-game schedule last season, has expanded to Toronto. Some players have been offered contracts between $10,000 and $15,000.

PWHPA players like Richards and defenders Lauren Williams of Windsor, Ont., and Melanie Desrochers of Montreal do not.

"Ten thousand dollars to someone like me to play hockey is a lot of money," the 23-year-old Williams said. "It comes down to I believe in the mission that we're on.

"Sacrificing now may end up creating benefits that I never experience as a female hockey player, but I want that for the next generation coming."

Desrochers, 28, insists she feel no animosity towards players who choose the NWHL.

"Why do we have to settle for just one thing?" she asked. "Everyone should have a place to play, but we also want to showcase the best product too.

"What it comes down to is maybe the philosophical view of how to get there. I personally just don't want to settle for incremental growth year after year. We've tried that model with the CW." 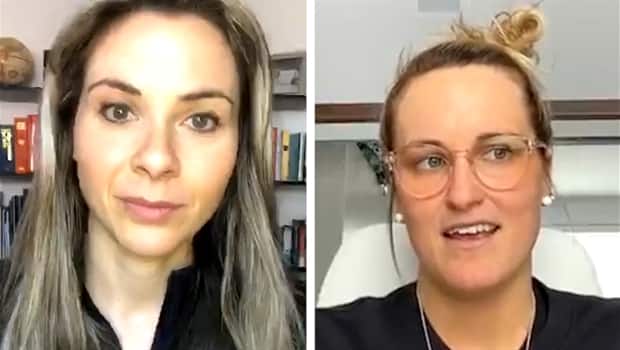 'There's a reason many of us are not playing in that league': Marie-Philip Poulin on NWHL expansion

11 months ago
2:15
Team Canada captain believes little girls should dream of playing in a league that the PWHPA envisions. 2:15

The PWHPA intends to operate groups of 25 players out of five hub cities that include Toronto, Calgary and Montreal.

Competition in Toronto will be tight because half of the Canadian women's hockey team lives in the area.

"I can't dedicate myself full-time to this sport. I can't train like a lot of elite athletes do," Richards acknowledged.

"I can't tell you how many times it was a quick stop at McDonald's on the way to practice versus having a nutritionist and someone helping you out."

Hefford says Richards' letter conveys the sacrifice PWHPA players are making in their hockey careers for a league they envision.

"I think it's incredibly powerful," Hefford said. "The national team players, it would be very easy to say 'you know what I'll just pick up my money, I'll go play in the NWHL, I have everything I need from the national program and things are good.'

"That would be the easy decision, but for these players it's the same thing. It would be easy for them to go play in the NWHL and make between ten and fifteen thousand dollars and add that to their salary of whatever their full time job is.

"They're making a hard decision too."