The Edmonton Oil Kings advance to the Memorial Cup final with a 4-3 triple overtime win over the Val-d'Or Foreurs. 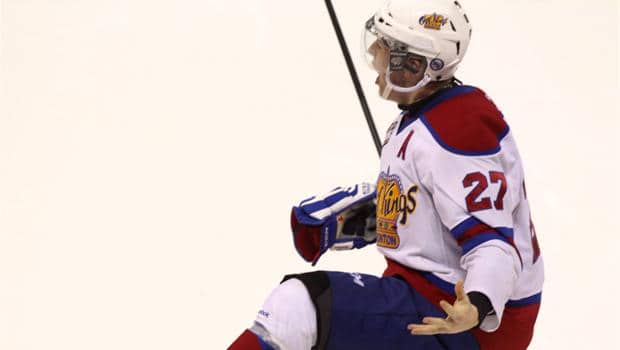 Edmonton will face the unbeaten Guelph Storm in the championship game.

Lazar joked that at least he and his teammates wouldn't get in trouble with coach Derek Laxdal for being out past their midnight curfew. The bad news was there was likely going to be no post-game pizza from their favourite joint.

"I think they're pretty disappointed because it's closed now," the assistant captain said.

London is now the site of the two longest games in Cup history as the previous record was 95 minutes 41 seconds in 2005, when the Ottawa 67's beat the Kelowna Rockets in double overtime.

Val-d'Or defenceman Guillaume Gelinas scored with 36 seconds remaining in regulation to send the game into overtime. Phil Pietroniro and Randy Gazzola also scored for the Foreurs. Antoine Bibeau made 50 saves in the loss.

This is Edmonton's second MasterCard Memorial Cup appearance in three years, but they'll play in their first final since 1971. The Oil Kings lost the tiebreaker game two years ago to host Shawinigan.

Val-d'Or's elimination from contention snaps a three-year run of Quebec Major Junior Hockey League teams winning the Cup. The OHL's Windsor Spitfires took it in 2009 and 2010.

The Oil Kings are a win away from becoming the first WHL team to win it since the Spokane Chiefs in 2008. Spokane's goaltender that year was Dustin Tokarski, who is currently tending the Montreal Canadiens' net in the NHL's Eastern Conference final.

Edmonton lost 4-3 in double overtime to Val-d'Or in the round-robin Tuesday, despite leading 2-0 after the first period and 3-2 with less than five minutes to go in the third. That game ended after 81 minutes 15 seconds.

The Oil Kings were again up by two goals in the second period and ahead by one late in the third Friday, but the persistent Foreurs forced another marathon.

"That was a real battle," Gelinas said. "We tried our best. We played hard. We got some good chances during the overtime and we never quit."

Val-d'Or's assistant captain was back in the lineup after suffering a leg contusion Monday in a knee-on-knee collision with Guelph's Chadd Bauman. Gelinas sat out the round-robin game against Edmonton the following night.

But with Bibeau pulled for an extra attacker, Gelinas threaded a shot from the blue-line through traffic that forced a second overtime game between these two teams in the tournament.

With Oil Kings defenceman Ashton Sautner serving a delay-of-game minor in the second overtime, the Foreurs had a chance to end it, but Jarry stopped Nicolas Aube-Kubel on a breakaway.

"These games are so emotionally taxing," Oil Kings forward Moroz said. "The highs and the lows and trying to keep an even keel is so tough, but I think that's what makes our team so special is our ability to just stay even and our ability to respond.

"We're resilient. We've said it so many times and it's true."

The Oil Kings managed to hold QMJHL leading scorer Anthony Mantha without a goal. That league's MVP had scored 81 goals in 81 games coming into the tournament and added another in Val-d'Or's opener.

But the Detroit Red Wings prospect did not score in his final three games of the Memorial Cup.

Edmonton and Val-d'Or played a combined 183 minutes 57 seconds against each other in the tournament.

"They never went away and they had a great season," Lazar said. "They should hold their heads high. Both games could have gone either way. We were fortunate to get that bounce tonight. You can't say much more. They competed, they battled and they're great competitors."