The owner of the Buffalo Beauts gave up control of the team Wednesday, a move that could further jeopardize the future of the National Women's Hockey League as it struggles to keep its five franchises afloat without the support of the world's top players.

The owner of the Buffalo Beauts gave up control of the team Wednesday, a move that could further jeopardize the future of the National Women's Hockey League as it struggles to keep its five franchises afloat without the support of the world's top players.

Beauts owner Kim Pegula informed NWHL commissioner Dani Rylan of her decision during a conference call Tuesday, a person with direct knowledge of the decision told The Associated Press. The discussion was considered Rylan's final opportunity to change the owner's mind, said the person, who spoke on condition of anonymity shortly before the decision was announced.

"Our main goal has always been fostering the growth of women's hockey across all ages," Pegula said in a statement. "We thank our Beauts players, staff, and fans for their support this past season. We will continue to look for ways to successfully grow the women's game."

The NWHL will re-assume control of the franchise, but will have to renegotiate facility fees if the league intends for the Beauts to continue playing at the Pegula-owned HarborCenter, the person told the AP.

Rylan thanked Pegula Sports for running the Beauts over the past two seasons and the organization's ongoing commitment to advance hockey at all levels. The league then issued a separate statement, saying the NWHL is pleased to regain operating control.

WATCH | What's next for women's hockey: 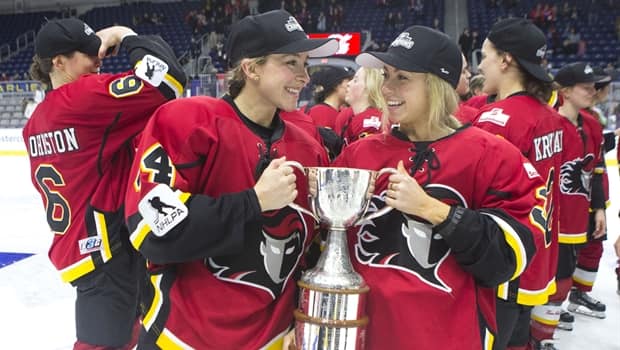 What's next for professional women's hockey in North America?

2 years ago
4:46
Hailey Salvian of The Athletic discusses the future of female pro hockey in North America after announcement that 200 players will boycott upcoming season in hopes of creating one sustainable league. 4:46

"The fans of Western New York are among the most dedicated in the world, and we have had four exceptional seasons of winning hockey and large crowds in Buffalo," the league said. We will look to continue our relationship with the Harborcenter and its incredible staff, and in the Beauts' fifth season and beyond, we will build on their tradition of success."

Last week, more than 200 players announced they would not play in North America this year without what they say needs to be a single, economically viable professional league for women. The list featured a number of Beauts players, including U.S. national team defenceman Emily Pfalzer and Canadian national team goalie Shannon Szabados.

The NWHL has said it plans to hold a fifth season this fall but has now lost one of its most influential private backers. Pegula and her husband Terry also own the NHL's Sabres and NFL's Bills, and became the NWHL's first private owners upon purchasing the Beauts in December 2017.

Their departure places a considerable dent in the league budget at a time the NWHL was raising the possibility of expanding into Toronto and Montreal after the Canadian Women's Hockey League shut down as of May 1, citing financial woes.

The Beauts were among the NWHL's first four teams and have advanced to the Isobel Cup championship game in each of the league's four seasons, winning it in 2017.

The Pegulas also earned league-wide praise for how the Beauts operated. Players had access to the Sabres' practice and workout facilities. The Sabres also assisted in marketing the players and team. And the Sabres went so far as to have their media relations staff produce game notes, something not all NWHL teams published.

Without the Pegulas, the NWHL will again be saddled with picking up the Beauts' operating and salary costs, estimated to be close to $200,000, the person told AP.

Jack Brodt, co-coach and founder of the NWHL champion Minnesota Whitecaps, on Monday told The Associated Press he was concerned about the league's status.

"It doesn't look too good right now," Brodt said while emphasizing he was speaking from a personal perspective and not for the league.

As for the Whitecaps' status, Brodt is taking a wait-and-see approach.

"I don't have any idea at this point in time what the situation is going forward," Brodt said. "With the players not willing to play and so forth, I don't know if there's going to be the ability to have a league."

The Whitecaps sold out all their home games, and led the NWHL with an average attendance of 1,200 last season. Buffalo was second at 1,101.

The Whitecaps remain privately controlled after joining the NWHL last year. Though the NWHL announced it reached an agreement in principle to purchase the Whitecaps, Brodt said the agreement was never signed.

The NWHL's three other teams are operated by the league, including the Metropolitan Riveters, who have a "strategic alliance" in place with the New Jersey Devils. As part of the three-year agreement, which runs through the end of next season, the Devils provide the Riveters time at their practice facility and include them in marketing and ticket sale programs.

The league's other two teams are based in Boston and Connecticut.