Bruins' Chara questionable for Game 5 after taking puck to face

Boston Bruins captain Zdeno Chara could miss Game 5 of the Stanley Cup final after taking a puck to the face in Monday night's loss to the St. Louis Blues.

Dental work likely for veteran D-man, who will be further evaluated in Boston

The Boston Bruins reached the Stanley Cup Final despite a run of regular-season injuries that prevented anyone on the roster from playing all 82 games.

The Bruins are preparing for Thursday's Game 5 (CBC, CBCSports.ca, 8 p.m. ET) against the St. Louis Blues without captain and No. 1 defenceman Zdeno Chara, who did not return after he was hit in the face by a deflected puck on Monday night. The St. Louis Blues won 4-2 to even the series at two games apiece.

Bruins coach Bruce Cassidy offered no update on Chara's condition after arriving in Boston on Tuesday except to say the 2009 Norris Trophy winner was on his way to see a doctor. The fact that Chara returned for the third period wearing a full face shield — and never got back on the ice — suggests it is more than the lost tooth or busted lip that usually only keeps a hockey player out long enough to get it stitched up.

"Right now, I've got nothing," Cassidy said. "But we don't play for two more days."

WATCH | Hulking defenceman Zdeno Chara is felled by a puck to the face: 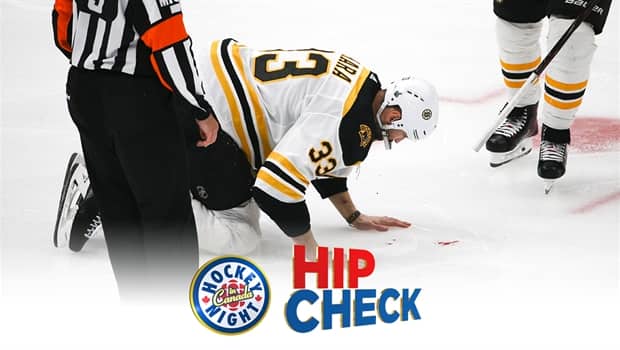 2 years agoVideo
1:20
The Boston Bruins captain returned to the bench in Game 4 after being patched up, but did not play another shift. 1:20

Although the 42-year-old Chara is the team's elder statesman and emotional leader, Cassidy said he is less worried about Chara's leadership than his 6-foot-9 presence on the ice.

"Taking great players out of the lineup, that's the part that hurts the most," Cassidy said. "I'm not worried about our mentality."

The Bruins have made it through the playoffs without defenceman Kevan Miller and also lost Matt Grzelcyk when he took an elbow to the head in Game 2 and needed to be helped off the ice. John Moore filled in for him in the third game, which the Bruins won.

But they were down to five men on the blue line again Monday night when Chara took a deflected shot from Brayden Schenn off the right side of the face. He crumpled to the ice, face-first, and then skated off, with blood dripping from his mouth. He returned at the start of the third wearing the shield but never went back in the game.

"Very uncomfortable, was advised not to return to play," Cassidy said after the game. "Had some stitches, probably some dental work in the near future. He wanted to come out on the bench and be with his teammates."

His teammates knew how difficult it was for him to just sit there.

"He's our leader, and the biggest part of our leadership," forward David Pastrnak said. "Anything that comes out of his mouth ... everybody is listening to him."

A six-time all-star and the perennial team leader in minutes played, Chara played a career-low (not counting lockout years) 62 games this season because of an unspecified injury that kept him out six weeks in November and December.

Although it's too early to rule him out for Game 5 — or perhaps longer — Cassidy said the most likely replacements would be Steven Kampfer or rookies Urho Vaakanainen, Jeremy Lauzon, and Jakub Zboril. Only Kampfer, with two games of playoff experience, has appeared in a postseason game.

"If both guys (Chara and Grzelcyk) are out, it's not an easy decision," Cassidy said. "It's not one I want to make, but you have to do what you have to do."

But don't rule them out just yet.

"Both of those players, they're warriors," defenceman Charlie McAvoy said. "They'll do whatever it takes to play."