The United States still has yet to trail at the world junior hockey championship, just getting past a feisty Switzerland squad by a 3-2 final in Monday's quarter-final at the Air Canada Centre in Toronto. Earlier, Russia blanked Denmark 4-0 and Sweden blew out Slovakia 8-3 to advance. 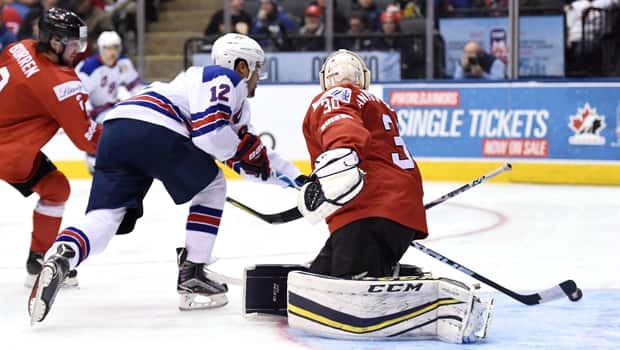 The United States hold on for 3-2 win over Switzerland

4 years agoVideo
0:18
The US will play Russia in the World Junior semifinals on Wednesday in Montreal. 0:18

The United States still has yet to trail at the world junior hockey championship, just getting past a feisty Switzerland squad by a 3-2 final in Monday's quarter-final at the Air Canada Centre in Toronto.

Jordan Greenway scored the go-ahead goal and eventual game-winner six-plus minutes into the third period after the Swiss rallied from a 2-0 first-period deficit. Jeremy Bracco added a goal and assist and Tyler Parsons made 19 saves for the Americans, who will face Russia in a Wednesday semifinal at the Bell Centre in Montreal.

A projected top-10 pick at the 2017 NHL draft, Nico Hischier scored both goals for Switzerland, which not only dug out from a two-goal deficit, but held the U.S. to just two second period shots while outshooting them 21-17 overall.

The Americans are looking for their first gold medal at the event since 2013, when a squad brimming with future NHLers, including Johnny Gaudreau and Alex Galchenyuk, edged past Sweden in Ufa, Russia.

The Americans struck twice in quick succession around the midway point of the first, Bracco at the centre of both goals.

A second round pick of the Toronto Maple Leafs in 2015 and current Kitchener Ranger, Bracco fired a shot from just inside the right faceoff circle on an American power play to give the U.S. the early 1-0 lead. He followed up on his third goal of the tournament by setting up the second marker from behind the Swiss goal, captain Luke Kunin ultimately banging home a puck that bounced around in front. 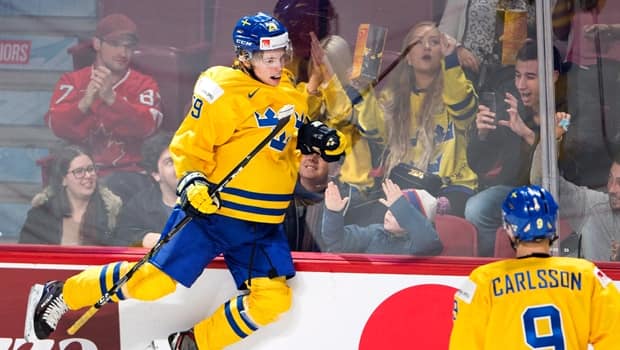 4 years agoVideo
0:28
Sweden beat up Slovakia on Monday to advance to the semifinals. 0:28

Sweden will face either Canada or the Czech Republic in the semifinal on Wednesday, depending on the outcome of their quarter-final match later Monday.

Goalie Felix Sandstrom made 15 saves for his fourth win of the tournament.

After Sweden took a 5-0 lead, Slovakia made things interesting with three consecutive goals from Martin Bodak, Miroslav Struska and Adam Ruzicka but that's all the Slovaks would get.

The Swedes, who finished top of Group A with four wins, continued their dominance at the tournament after scoring 18 goals in the preliminary round.

Defenceman Gabriel Carlsson was back in the lineup after missing Sweden's last game with an injury.

Sweden beat Slovakia 6-0 in last year's quarter-final before losing to Finland 2-1 in the semifinal. The team's last gold medal was in 2012. 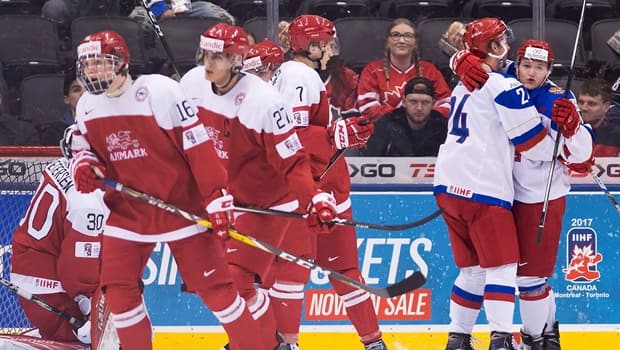 Russia will face either the United States or Switzerland in Wednesday's semifinals at Montreal's Bell Centre.

The Russians have medals at six consecutive world junior tournaments, but just one gold medal in that span (2011).

Kaprizov's two goals saw the 19-year-old Minnesota Wild prospect pass Sweden's Alex Nylander for the tournament lead in points (10) at the under-20 tournament.

Alexander Polunin and Pavel Karnaukhov had the other Russian goals while Washington Capitals prospect Ilya Samsonov turned aside 14 shots for his second shutout of the tournament. Philadelphia Flyers draft pick Mikhail Vorobyov had two assists in the win and now leads the tournament with eight assists.

Danish starter Lasse Petersen allowed two goals on nine shots in the first period and was relieved by Kasper Krog to start the second. Krog stopped 23 shots, including 15 in the second period.​

Russia needed overtime to defeat the Danes 4-3 in the quarter-finals of last year's tournament. The Russians settled for silver at the 2016 tournament after losing 4-3 in overtime to the host Finland in the gold medal game.

By qualifying for the quarter-finals, Denmark ensured it will participate in a record fourth consecutive world junior championship next year in Buffalo, N.Y.