Troy Terry's second period goal stood as the winner as the United States held on for a 3-2 victory over Russia on Thursday in Toronto at the world junior hockey championship. 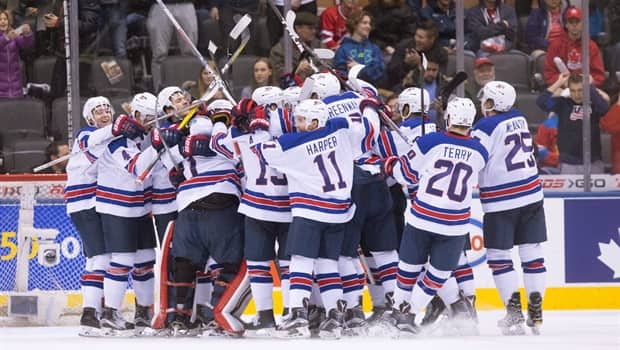 4 years agoVideo
0:20
The Americans defeated Russia 3-2 on Thursday afternoon at the World Junior Hockey Championships in Toronto to move their record to 3-0 at the tournament, while Russia falls to 1-2. 0:20

The United States ended a near decade-long losing streak against Russia on Thursday at the world junior hockey championship.

Troy Terry's second-period goal stood as the winner as the U.S. beat Russia 3-2 for its first victory over the Russians at the under-20 tournament since 2007, a stretch of five consecutive losses.

"Especially with the history that we have, the core group of (national team development program) players we have, they've beat us the past couple times so that made it a little sweeter to beat them," said Terry.

The win temporarily moved the U.S. ahead of Canada in the Group B standings with the Canadians playing Latvia later Thursday evening.

Terry, an Anaheim Ducks prospect, scored 11:41 into the second period to give the U.S. a 3-1 lead. Terry re-directed an Erik Foley shot between the legs of Ilya Samsonov for his second goal of the tournament.

Clayton Keller and Colin White had the other goals for the Americans while Tyler Parsons stopped 25 shots in the victory.

Kirill Urakov and Kirill Kaprizov responded for the Russians while Samsonov made 34 saves.

"We just took too many penalties in the first period, we're on the (penalty kill) a lot in our (defensive) zone — that was kind of hard," said Montreal Canadiens prospect Mikhail Sergachyov. "Our goalie made some big saves and kept us in the game, we should've scored.

"They didn't do anything special, we got power-play chances (in the third), but their goalie played good, there weren't any rebounds."

The Americans win means Saturday's game against the Canadians will likely be for top seed in Group B should Canada defeat Latvia.

"It's a game you grow up watching, that New Years Eve game. To have it in Canada here, you grow up seeing that, we're not going to be liked that's for sure," said McAvoy, a Boston Bruins prospect. "We're not expecting much love, it's going to be us against kind of their whole country."

Russia concludes the preliminary round on Saturday against Slovakia.

Mathias From scored 47 seconds into overtime to give Denmark its first victory over the Czech Republic in tournament history, a 3-2 decision in Montreal.

From beat Daniel Vladar with a high backhander. The Chicago Blackhawks prospect made his first appearance in the tournament after returning from an ankle injury.

"I knew yesterday that I was going to play," From said. "It was hard to come into the game at first because I didn't play for some time. (My injury) happened on the first day of training camp."

Joachim Blichfeld and Nikolaj Krag each had a goal and an assist for Denmark. After opening with a 6-1 loss to Sweden, Denmark beat defending champion Finland 3-2 on Tuesday.

Martin Necas and Filip Hronek scored for the Czech Republic.

"In the third period, we were scared to do something," Czech forward Filip Chlapik said. "There is nothing much to say. It wasn't a good game for us." 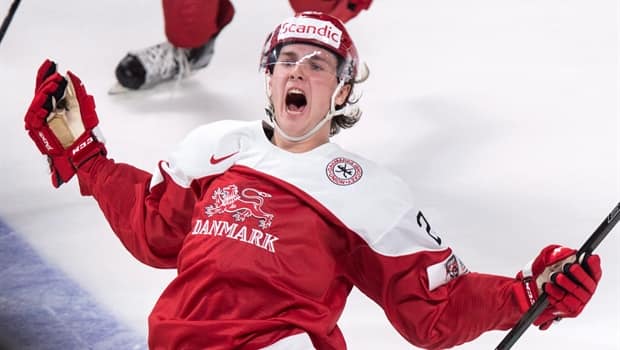 Danes shock Czechs in OT with goal of the tournament

4 years agoVideo
0:40
Mathias From scored what may become the goal of the World Juniors in overtime on Thursday to give Denmark a 3-2 victory over the Czech Republic. 0:40

Defending champ Finland on the ropes

Alexander Nylander had two goals and an assist to lift Sweden to a 3-1 victory over winless Finland on Thursday night.

Lias Andersson also scored for Sweden (3-0-0), which ends preliminary round play Saturday against the Czech Republic (1-0-2).

Aapeli Rasanen scored for the defending champion Finns (0-3-0), who need Switzerland to lose to Denmark (1-1-1) on Friday and then beat the Swiss on Saturday to reach the quarter-finals.

Sweden has won 39 consecutive group stage games since an overtime loss to the United States in 2007, but they lost to Finland in the semifinals at last year's tournament and in the 2014 final.

Finland played desperate hockey and outshot Sweden 29-20, but inexperience and often disjointed play has dogged them from their opening-game loss to the Czechs. And Swedish goalie Felix Sandstrom had an outstanding game.

Finland defeated Russia in the gold medal game last year in Helsinki, but have struggled in this tournament without their top line of Patrik Laine, Sebastian Aho and Jesse Puljujarvi, who are all still eligible but are now playing in the NHL. The Finns have the second-youngest team at the tournament behind Switzerland. 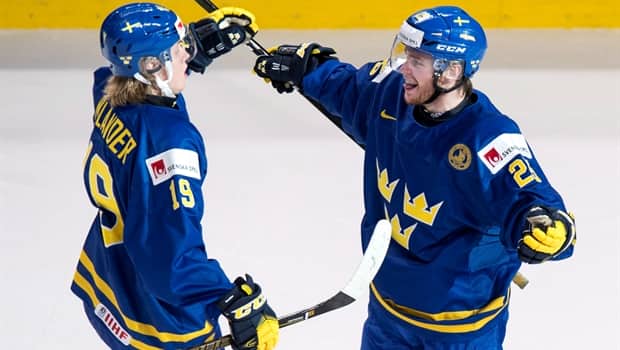