Winnipeg goaltender Connor Hellebuyck shut out the Minnesota Wild just two nights after being yanked in Sunday's loss. It's a resiliency he has demonstrated all season.

Licking their wounds from a downer of a Game 3, the Winnipeg Jets received some good news on Tuesday afternoon when the Minnesota Wild announced that Zach Parise would miss the rest of the series after he suffered a fractured sternum late in that impressive 6-2 Minnesota victory on Sunday.

The Wild already were without stud defenceman Ryan Suter. But the Jets had to find a way to get by without one of their top defenceman, Tyler Myers, who returned to Winnipeg to nurse a lower-body ailment from Game 3.

They still had to wait and see how their own netminder, Connor Hellebuyck, would respond to the disappointment of his Game 3 outing in which he managed only 16 saves on 22 shots and was yanked after two periods. And they still had to find a way to beat the Wild's stingy goalkeeper, Devan Dubnyk.

The Jets' first-line centre Mark Scheifele found a way. His seeing-eye shot through traffic late in the first period was the only goal Winnipeg needed. He added an empty-netter with 10.7 seconds remaining for a 2-0 win to return the Jets home with a 3-1 series lead with Game 5 set for Friday. 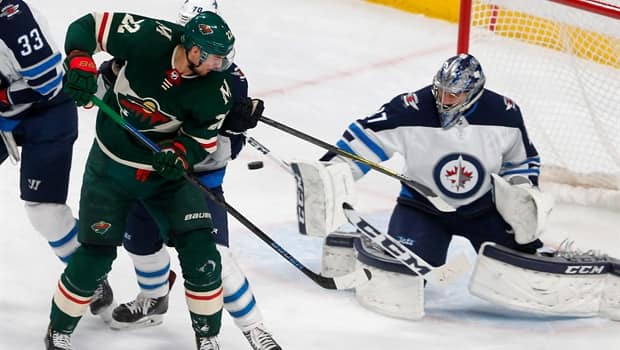 The 24-year-old Hellebuyck bounced back just fine with a 30-save shutout, the first of his NHL post-season career. He was particularly good when he stretched out to make a glove save on Wild defenceman Matt Dumba to keep the Jets in front early in the second period.

He exhibited his resiliency and an ability to look ahead rather than behind on many occasions in the regular season. Six times he allowed more than five goals against and in his next game after these dismal outings he bounced back with a 5-0-1 record. This was part of the reason he was named a Vezina Trophy nominee on Tuesday.

But this is the playoffs. There's different pressure. This is a new experience for him. He still had to demonstrate to his teammates how he was going to react after being knocked out of Sunday's game.

"I left that one behind me. I didn't even think about it twice," he said in his post-game remarks on the NBC broadcast.
"We had a little more jump in our step. I thought we brought our game and [focussed on] details and stuck to it the entire night."

Tucker Poolman, 24, replaced Myers. He had only 24 regular-season games of experience and was sheltered with only eight minutes and 17 seconds of playing time, a team-low on Tuesday.

But others stepped up in the absence of Myers, who had been playing some of the best hockey of his career. Dustin Byfuglien was physical and led the Jets in ice time at 28:05.

Young blue-liner Josh Morrissey, 23, also continued his ascendancy toward becoming an elite defender. He was brilliant as a 19-year-old when the Jets' farm club, the St. John's IceCaps, lost in the 2014 Calder Cup final and he has been brilliant in this series.

Morrissey made an outstanding stick check on Nino Niederreiter when the Minnesota forward was in close all alone in the second period.

Morrissey also helped set up Scheifele for his game-winner, but certainly got away with one during the Wild's first power play three minutes earlier. Morrissey, a Calgary native, crossed-checked Minnesota centre Eric Staal to the side of the head.

The incident went undetected by referees Dean Morton and Steve Kozari, but will it be examined by the league's Department of Player Safety with a suspension possible for Game 5.

"I'm still a little heated about it," Wild coach Bruce Boudreau said. "[The officials] said they didn't see it, but they were looking right at it."

The Jets lineup will be further depleted if Morrissey is suspended and if Myers isn't ready to return. If that's the case, another rookie — Finn Sami Niku, who made his NHL debut late in the season — could be the 11th Winnipeg player to play in his first Stanley Cup playoff game this spring.

A suspension to Morrissey would be a big loss and make it all the more difficult for the citizens of Winnipeg to celebrate their first playoff series victory since Dale Hawerchuk and the Jets defeated the Calgary Flames in the first round in 1987.