The expansion Golden Knights downed the Winnipeg Jets 3-2 on Friday to lead the NHL's Western Conference final three games to one.

Marc-Andre Fleury is an expert on the difficulty of closing out a playoff series.

The Vegas Golden Knights goaltender has the experience to know, with his three Stanley Cup rings and 129 career NHL playoff games.

Up three games to one on the Winnipeg Jets in the NHL's Western Conference final, the expansion Golden Knights are a win away from advancing to the Stanley Cup final thanks in large part to Fleury's work this series.

Las Vegas has a chance to finish the Jets off in Sunday afternoon's Game 5 in Winnipeg.

"The last one is always the toughest to get," Fleury said after his 35 saves in a 3-2 win over the Jets on Friday. 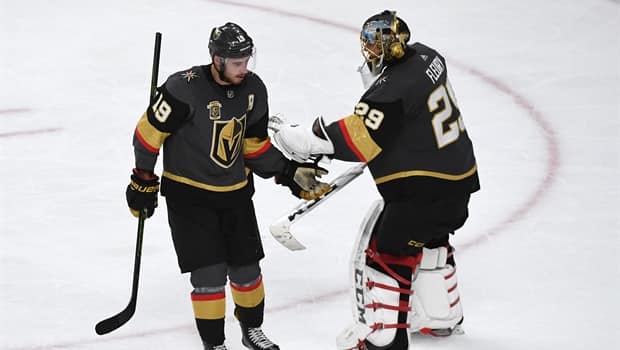 No modern-day expansion team has reached the Stanley Cup final.

The St. Louis Blues were among six teams that joined the NHL in 1967 — doubling the league to a dozen teams — when they were swept in the final by the Montreal Canadiens.

After his 33 saves in a 4-2 Game 3 win, the 34-year-old Fleury from Sorel, Que., again fended off a late Jets push when Winnipeg outshot the hosts 12-2 in the first half of the third period.

Series far from over

Smith scored the winner at 13:02 of the third, when Jets defenceman Dustin Byfuglien whiffed on a bouncing puck attempting a shot from the point.

Smith stole the puck and stayed a step ahead of defenders Brandon Tanev and Josh Morrissey coming back. The Toronto native got a knuckler away that beat Connor Hellebuyck over the Winnipeg goalie's shoulder.

"I was just trying to get as much ice as I could before the other defencemen closed in," Smith said. "I pretty much just buried my head and put it on net."

William Karlsson and Tomas Nosek also scored for the Golden Knights at a raucous T-Mobile Arena.

Patrick Laine and Tyler Myers countered for the Jets, who lost their third in a row this series.

"In our minds, this series is far from over," Myers said.

Hellebuyck stopped 26 of 29 shots in the loss.

"This is a heartbreaker but we gotta move on," the Jets goalie said. "We now have everything on the line."

A Game 6, if necessary, would be back in Las Vegas on Tuesday.

Vegas improved to 9-1 this post-season when scoring the first goal of the game. The Jets are 7-1, but chased the Golden Knights a third straight game after giving up a first-period goal.

Jonathan Marchessault scored 35 seconds into Game 3 and it was the left-winger from Cap-Rouge, Que., who set up the first goal less than three minutes after puck drop Friday.

Myers beat Fleury between the pads at 5:36 of the third period to pull the visitors even at 2-2,

Also like Game 3, Winnipeg tied the game in the second period only for the Knights to score less than a minute later and re-take the lead.

"All series long we've been doing it," Fleury said. "I feel like Winnipeg's a team that feeds off that momentum when they get a goal. They get a goal, but we go at them right back. We've been scoring big goals after that."

When Hellebuyck bobbled a rebound in the second, Pierre-Edouard Bellemare scooped up the puck and attempted a wraparound goal. Nosek shoved the puck between Hellebuyck's legs to make it 2-1 at 10:12.

Laine scored a power-play goal at 9:29 to pull the Jets even. He one-timed a shot from the face-off circle under Fleury's arm.

With Myers serving an interference penalty, Karlsson beat Hellebuyck low glove side on a cross-ice feed from Marchessaault at 2:25.