Jets not ready to sing playoff blues with win over St. Louis

Connor Hellebuyck turned away all 29 shots he faced to earn his fourth shutout of the season in the Winnipeg Jets' 3-0 victory over the St. Louis Blues on Friday. 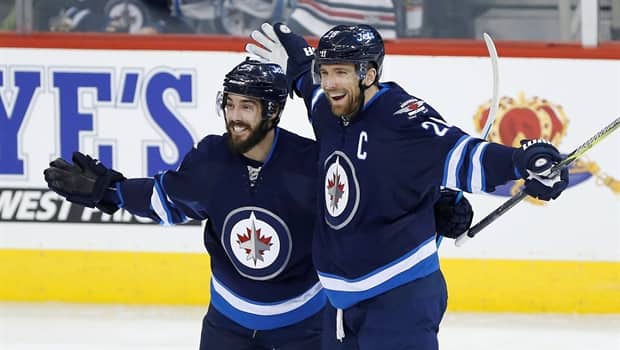 Connor Hellebuyck knows his Winnipeg Jets don't have much room for error. So he made no mistakes on Friday night.

Hellebuyck stopped all 29 shots he faced as the Jets shut out the St. Louis Blues 3-0 for a crucial win in the NHL's Western Conference post-season chase.

"It's huge. It's a four-point game and we're kind of chasing them right now," said Hellebuyck. "We do want to make the playoffs, and that's our goal here so this is another good step in the right direction."

"The importance of this game was evident throughout these last two days of practice," said Winnipeg captain Blake Wheeler, who scored his 18th and 19th goals of the season. "After that (6-5 loss to Minnesota on Tuesday), there was a sour taste in the room. We didn't really play our best game but had an opportunity to try and salvage something.

"This time of year you can't miss out on those opportunities."

Wheeler's winner came on a first-period power play, as the Jets handed the Blues their fifth-consecutive loss. Bryan Little added an empty-netter for his 18th of the season with 2:16 remaining in regulation before Wheeler scored his second of the game into an empty net.

Little turns on the jets for this one! <a href="https://t.co/IsfHniX9hr">pic.twitter.com/IsfHniX9hr</a>

Winnipeg finished the night one for five on the power play, while St. Louis went zero for three.

"I thought it looked good," said Wheeler of the Jets' power play. "The goal was great but the other power plays were probably even more dangerous. We had ample scoring opportunities. That's what a power play is supposed to look like right there in terms of creating scoring chances, creating shots, and creating momentum for your team. You come off two minutes where you have them in their zone and their goalie has to make some big saves and the rink seems to tilt in your favour."

Hellebuyck improved his record to 21-15-3 in his ninth straight start in goal for the Jets. Blues goalie Carter Hutton made 37 saves to fall to 9-8-2 on the year.

"He's fantastic," said Blues defenceman Alex Pietrangelo of Hutton. "You feel bad for him when he plays that way when we don't even score a goal and he lets in one goal. Great effort from him. He was outstanding, like he usually is."

Hutton has been superb in 2017, entering Friday with shutouts in his previous two starts, while also recording perfect outings in four of his previous eight starts dating back to Jan. 14.

"I think we need to be a lot better defensively," said Hutton. "We gave up a lot of good chances. Any time you're giving up, I don't know how many shots they ended up with, but that's not good enough."

"We're playing a desperate hockey team and they showed they wanted it a lot more than us tonight."

Winnipeg is right back at it Saturday night against the Avalanche, with four games remaining on their longest home stand of the season — six games — as they host Colorado, San Jose, Pittsburgh, and Calgary through next weekend.

The Blues, sitting one point out of the wild card, complete their three game road trip with visits to Colorado on Sunday and Minnesota on Tuesday.