If you required another indictment that Gary Bettman’s playoff format is flawed, all you had to do was tune in to watch the wonderfully wild double overtime game between the Winnipeg Jets and Nashville Predators in the heart of country music on Sunday evening.

If you required another indictment that Gary Bettman's playoff format is flawed, all you had to do was tune in to watch the wonderfully wild double-overtime game between the Winnipeg Jets and Nashville Predators in the heart of country music on Sunday.

The NHL's top two teams should not be battling in the second round of the Stanley Cup playoffs. But the commissioner and his advisors love their brackets and division rivalries to market the game, so we may as well continue to enjoy what the rest of a series — that's already yielded 14 goals through two games — has to offer.

The end result in Game 2 was a Kevin Fiala goal five minutes and 37 seconds into the second overtime period to give the Predators a 5-4 victory and even the series at 1-1 with Game 3 on deck in Winnipeg on Tuesday.

Fiala's game-winner was the result of a two-on-one that developed just inside the Predators' blue line. Jets defenceman Toby Enstrom got caught in a pinch as Nashville's Kyle Turris chipped the puck to linemate Craig Smith. Smith then set up Fiala for a perfect deke off the rush.

The Jets were caught with their fourth line out against the Predators' second line. 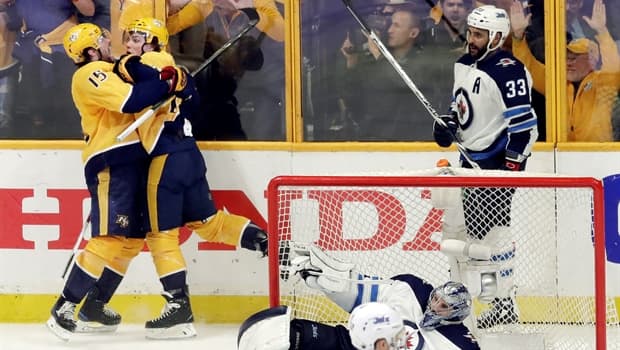 3 years agoVideo
1:41
Kevin Fiala scored in double overtime to lift Nashville over Winnipeg, tying the 2nd round playoff series at 1 game a piece. 1:41

The 21-year-old Fiala missed out on the final two rounds of the Predators run to the final a year ago. The Swiss left winger suffered a broken left leg in the second round and was knocked out of the playoffs.

But before Fiala delivered the knockout blow in this back-and-forth outing, the Jets and Predators clashed to give us a classic. This game was tied on four different occasions, with the final tying goal coming off the stick of Jets star Mark Scheifele with 65 seconds remaining in regulation time thanks to a pinpoint pass from captain Blake Wheeler.

This game had it all. There was so much pace, energy and emotion — for over four periods. There was some nastiness, plenty of highlight goals and some remarkable saves from Nashville goalie Pekka Rinne and Winnipeg counterpart Connor Hellebuyck.

Jets defenceman Dustin Byfuglien was excellent, too — as was Predators blue-liner P.K. Subban, who scored the Predators' 2-2 goal early in the second period on the power play. Subban played 39:24, almost four minutes more than Byfuglien's team-leading 35:27.

But as disappointing as the outcome was for Winnipeg, the Jets played a better game than they did in the opener when they were opportunistic in a 4-1 win.

"It was a sucky way to lose, but I think we played a better game than we did on Friday, so that's a positive," said Scheifele, whose Jets outshot Nashville 50-41. "We can be upset for 10 minutes, but after that we need to get our rest and get ready for Tuesday.

"We had our chances and they had their chances.

The Predators needed this win. They couldn't afford to visit Winnipeg behind 2-0. The Jets' rink proved to be the most difficult venue for visitors this season with Winnipeg putting together a league-best 32-7-2 record in the regular season. They went three-for-three in the first round against the Minnesota Wild.

But the Predators were the best road team in the regular season and won two of three in Colorado against the Avalanche in the first round.

Game 3 can't arrive soon enough, because even if the bracket era is flawed, this matchup has been a marvel.