Mikael Granlund and Zach Parise scored power-play goals in the first period for the spark Minnesota was missing on the road, and the Wild used a four-goal second to roar back in the first-round playoff series with a 6-2 victory over the Winnipeg Jets on Sunday night.

Blake Wheeler didn't see the same intensity from his team Sunday that the Winnipeg Jets displayed over the first two games of their first-round playoff series.

That stung them in a Game 3 loss to the Minnesota Wild.

"It's one game in a seven-game series. We didn't play anywhere near our level tonight, and it's a fine line for us," said the Jets captain. "We need to play with team speed, like we were able to accomplish the second half of both Games 1 and 2. They came out extremely hard, it's not a death sentence by any means in this building. But when that second period started, we weren't able to get faster. And that's when the game changed. They stuck with it, and we just weren't able to get to our speed we needed to get to. 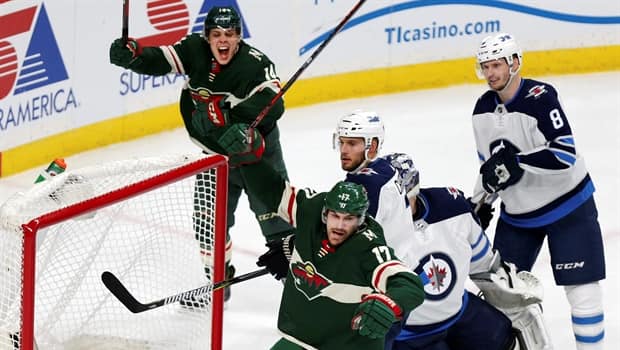 "Our game is based on some speed and some quickness and that was pretty much lacking in our game," said Maurice. "We didn't move the puck well. Didn't skate as well as we need to, to defend and we also didn't generate."

It was the first win for the Wild in the best-of-seven series, and left the Jets still looking for their first road playoff win in franchise history.

Eric Staal, Marcus Foligno, Jordan Greenway and Matt Dumba scored in the second period, while Zach Parise and Mikael Granlund scored in the first. Greenway's tally was his first in the NHL.

Wheeler and Tyler Myers scored for the Jets, but Myers left the game in the second period after an awkward collision with the boards and did not return. Starter Connor Hellebuyck had 16 saves in the opening 40 minutes, but did not finish the game.

Minnesota set a franchise record for goals in a home playoff game, and showed some offensive ambition after being held to 20 shots or fewer in the series' first two games in Winnipeg. Devan Dubnyk had 29 saves.

The Jets tried to travel to St. Paul on Saturday, but were diverted to Duluth, Minn., due to a spring blizzard that closed the Minneapolis-St. Paul airport. They eventually returned to Winnipeg and did not arrive in Minnesota until Sunday morning.

The tone was set in the opening minute of Sunday night's game with Minnesota pressuring, as Jets defenceman Dustin Byfuglien levelled Wild forward Nino Niederreiter at the side of Winnipeg's net.

'We needed a win'

Wheeler put Winnipeg up 1-0 on a power play on the first Jets shot of the game, snapping a bouncing puck from along the goal line that caromed off Dubnyk's glove hand and in. It was the third career playoff goal for Wheeler, and his first of the series.

Penalty trouble for the Jets opened the window for Minnesota to tie the game, as Granlund popped a rebound high past Hellebuyck on the stick side after the goalie turned aside a Mikko Koivu slap shot. Parise scored another power-play goal on a redirect of a Koivu shot with 2:10 to play in the first.

"We needed a win. That's the bottom line," Granlund said. "I mean, it really doesn't matter if it's 1-0 or 6-2, there's a whole new game on Tuesday and only the wins matter."

Hellebuyck had little chance on Minnesota's third goal, early in the middle period, as Dumba's shot from the point made it through a crowd at the top of the crease for a 3-1 Wild lead. But the Jets answered quickly on Myers' blast from the right point that eluded Dubnyk on the stick side.

Then the floodgates opened on Hellebuyck, who surrendered goals by Staal and Greenway just 20 seconds apart, and another by Foligno late in the period for a four-goal Wild lead. The Jets' starter didn't get into specifics about which pucks he saw after the game.

"I don't really want to get into details because I'm putting this one behind me," said Hellebuyck. "We've got a long series ahead of us and I really want to look forward to the next one because this is a fun time of year."

Myers left the game late in the second. After a shot from the point, he was hit by Foligno and slid skates-first into the boards near the Winnipeg bench. After lying motionless for more than a minute, Myers was helped down the tunnel and did not return to the game.

"Nothing yet. We'll have him looked at," Maurice said of Myers' status after the game, adding that he "didn't love" the hit on Myers by Foligno.

Steve Mason replaced Hellebuyck in goal for the scoreless third period and finished with seven saves.

Game 4 is Tuesday night in Minnesota.