Jets' Laine sets up Little for OT winner against Blues

Patrik Laine set up Bryan Little for an overtime goal and also got his 16th score of the season, helping the Winnipeg Jets beat the St. Louis Blues 3-2 in overtime on Saturday night. 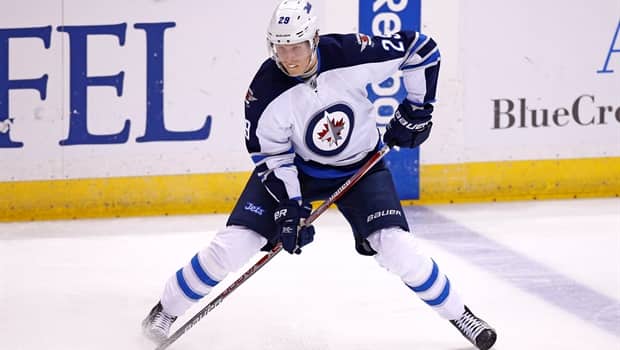 Laine leads the way for Winnipeg in OT win

4 years agoVideo
1:17
Rookie Patrick Laine had an assist and tied Sidney Crosby for the lead league with his 16th goal of the season. 1:17

Patrik Laine has been a one-man show for the Winnipeg Jets of late, and he capped his performance Saturday night with fitting flash.

Laine set up Bryan Little for an overtime goal and also got his 16th score of the season, helping the Jets beat the St. Louis Blues 3-2.

"It feels good," said Laine, who has four goals and an assist over the last three games. "And now we finally get the win as a team, so I'm really happy."

"It gets a little bit of confidence in the room when you hit the road that you can play that game and get a good result," Jets right wing Blake Wheeler said.

Laine tied Pittsburgh's Sidney Crosby for the NHL goals lead with a score assisted by Little midway through the second period.

Michael Hutchinson stopped 20 of 22 shots to get his first win since Oct. 28, snapping a string of four straight losses. Chris Thorburn also scored for Winnipeg.

Alexander Steen and Dmitrij Jaskin scored for St. Louis. The Blues fell to 11-1-3 at home, ending their six-game home winning streak. The Blues have a point in their last 12 home games.

"The game just really wasn't consistent," Jaskin said. "We had three or four power plays in the first period and it's hard to get into the game and everything was kind of bouncing and it really wasn't going well."

St. Louis failed to convert on all four of its power-play attempts, snapping a streak of four straight games scoring at least one power-play goal.

Carter Hutton stopped 20 of 23 shots and has lost his last four games.

Little won it with his second goal of the season, blowing past Steen before one-touching Laine's pass to complete a 2-on-1 rush.

"I don't know where the two Blues guys were," Laine said. "I saw Little going back door and I just wanted to pass it to him and it was an awesome finish."

"I didn't think we were going to get beat back door because it looked like a 1-on-1 to me," Hutton said. "So I'm playing the players and it's not really my guy. Obviously, it's frustrating."

Thorburn opened the scoring with a short-handed goal. St. Louis' Vladimir Tarasenko fanned on a shot attempt, leaving the puck for Blake Wheeler to lead a 2-on-1 break down the ice.

Steen got St. Louis on the board 5:16 into the second period with his third goal of the season and first since Oct. 22. The goal was the 200th of Steen's career.

Laine buried a feed from Little to tie it 9:18 into the second period.