Wings' Niklas Kronwall taken off on stretcher after hit

Detroit defenceman Niklas Kronwall was carried off the ice on a stretcher after being rammed into the boards on Thursday night by Colorado Avalanche forward Cody McLeod. 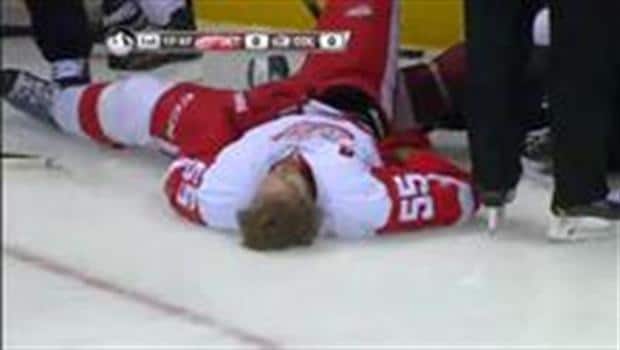 Niklas Kronwall taken off on stretcher

7 years ago
3:29
Detroit Red Wings defenceman is injured after taking a hit from Cody McLeod. 3:29

Detroit defenceman Niklas Kronwall was carried off the ice on a stretcher after being rammed into the boards on Thursday night by Colorado Avalanche forward Cody McLeod.

The Red Wings announced on their Twitter account that Kronwall, "has a concussion; cuts to the ear but he's moving all extremities, being treating in locker room."

General manager Ken Holland said after the first period that Kronwall wasn't sent to the hospital and there was no plan to do so.

"He talked to the doctor. He's alert. He's in the building," Holland said. "Let's get to tomorrow morning. Let's see how he's doing."

Kronwall was trying to gather the puck in the corner early in the game when he was hit by McLeod. Kronwall's helmet flew off as he fell to the ice.

Several teammates gathered around Kronwall as the dependable defenceman was strapped to the stretcher. Kronwall tossed away one of his gloves.

McLeod received a major penalty for boarding and was ejected. Kronwall has one goal and five assists in seven games this season for the Red Wings.