The Vancouver Canucks on Monday announced the hiring of Willie Desjardins as their new head coach. 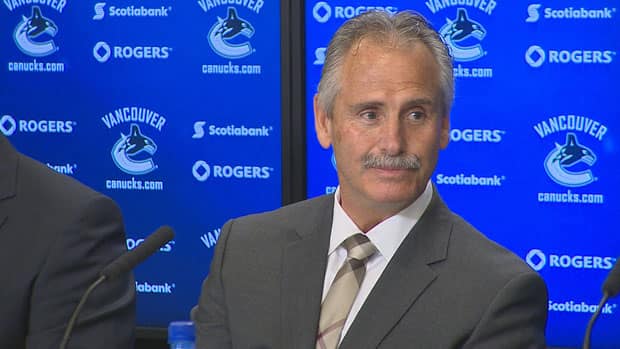 Willie Desjardins has built champions in major junior hockey and the AHL.

Now he'll get the chance in the sport's biggest league.

"I've been looking forward to this opportunity for a long time," said the 57-year-old Desjardins, whose coaching career has taken him from Japan to the Canadian national program, and from the WHL to the minor leagues, since he was first hired as an assistant with the University of Calgary in 1985.

"To be part of such a great organization and NHL city is just a real honour."

Desjardins was also rumoured to be a candidate to take over in Pittsburgh, where the Penguins boast a roster that includes superstars Sidney Crosby and Evgeni Malkin. The former coach of the WHL's Medicine Hat Tigers said a chance to return to Canada was too good to pass up.

"Sidney Crosby's a heck of a hockey player obviously, but for me, when I looked at what was here — I looked at the two guys who are leading this [Benning and Linden], I looked at the quality of the players ... Canadian market, Vancouver fans — it was the right choice to come here."

Desjardins, a native of Climax, Sask., most recently led the AHL's Texas Stars to a Calder Cup championship.

He spent two years with Texas, winning the AHL's coach of the year award in 2012-13 when he led the Stars to their first ever South Division regular season title and the number one seed in the Western Conference for the 2013 playoffs.

Prior to his tenure in the AHL, Desjardins spent two seasons as an associate coach with the Dallas Stars from 2010 to 2012.

Desjardins was named WHL coach of the year for the 2005-06 season, and was also the recipient of the Brian Kilrea Coach of the Year Award as the top coach in the Canadian Hockey League in 2006.

Desjardins' resume also includes stints on Canada's staff at two world junior tournaments and one world championship, as well as time coaching with the University of Calgary and in Japan.

"I've watched Willie's teams play over the last 12 years," Benning said. "His teams play fast and work extremely hard. They play an up-tempo hard-skating kind of game. His teams play with that relentless attitude that we want our players to play with."

Desjardins becomes the 18th head coach in club history and succeeds John Tortorella, who was fired after just one year behind the Canucks bench.

Tortorella and former Canucks president and general manager Mike Gillis were casualties of Vancouver's disappointing season that saw the Canucks miss the playoffs for the first time since 2008.

Desjardins says he thinks the Canucks can become a playoff contender again.

"We have so many great leaders on this team, and to get to be part of that group, I'm looking forward to it," Desjardins said. "They've won in the past, they'll win again."

AS IT HAPPENED: Blog from CBC News reporter Steve Lus