Jonathan Marchessault scored his 23rd goal of the season and the Vegas Golden Knights beat the Vancouver Canucks 4-1 on Tuesday night.

For the second consecutive game, the Vegas Golden Knights looked like the same team that was so dominant for much of the season.

But while 12 players had points for expansion Vegas, mystery surrounded the status of starting goaltender Marc-Andre Fleury, who exited after one period. Fleury took a shot from Brandon Sutter off the mask midway through the first, but finished the period. 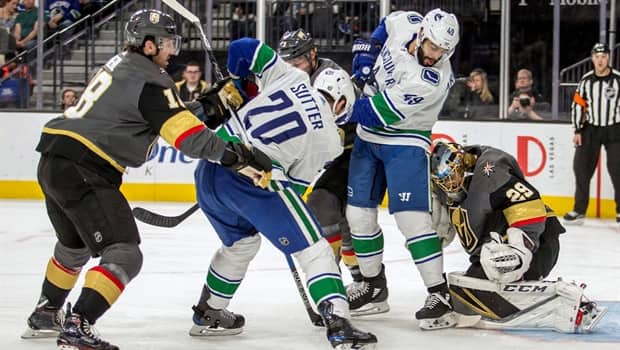 Fleury, credited with the victory after making seven saves to improve to 27-11-3, took over sole possession of 12th place on the NHL's career wins list with 402. The 14-year veteran missed 25 games this season after suffering a concussion four games in.

"I haven't heard [anything] yet. The trainers told me he's not coming back tonight," said Vegas coach Gerard Gallant, who confirmed it was not the plan to rest the three-time Stanley Cup champion netminder after one period of play.

Malcolm Subban took over in net at the start of the second, making his first appearance since Feb. 2, when he lost in Minnesota. Subban made 22 saves.

"I'm not too sure what happened [with Fleury], they just told me I was going in," said Subban, who found out he would replace Fleury midway through the first intermission. "I felt pretty good, I guess. The game felt pretty fast. It's been a long time since I played a game. When you're out for that long you can't wait to get back in the net."

Cody Eakin, Pierre-Edouard Bellemare and Tomas Tatar also scored for Vegas, which ranks second in the league with 245 goals.

Vancouver got a goal from Sutter, and Jacob Markstrom stopped 24 shots. Markstrom dropped to 18-26-6 after losing his fifth straight start. He has allowed 14 goals during that skid.

Vancouver fell to 6-17-1 against Pacific Division teams. It came into the game with the league's fifth-best road power play at 21.9 percent but was 0 for 1 on Tuesday.

The Canucks have dropped seven straight since losing 21-year-old rookie star Brock Boeser to a potential season-ending back injury. Boeser leads Vancouver with 29 goals and 55 points. The Canucks have scored just seven goals in the seven games since his injury, and were shut out in three consecutive games.

"Their team came ready to play tonight. That's a good hockey team," Vancouver coach Travis Green said. "When you get down 2-0 early and 3-0 after one, you're not going to come back against a team like that — or, we're not. It's frustrating to lose. The players are frustrated. I don't blame them. I think it's a combination of not scoring ... and losing."

Vegas earned its 26th win at home, one more victory than Vancouver has overall this season.

Now the Golden Knights prepare for a two-game road trip with Fleury's status uncertain, beginning at red-hot San Jose, which defeated New Jersey 6-2 on Tuesday. The second-place Sharks are eight points behind the Golden Knights in the Pacific Division.

Marchessault, who ended a personal drought when he scored four minutes into the game, said removing Fleury was a precautionary move and he didn't believe it was anything serious.

"It was a smart decision," Marchessault said. "We're winning 3-0, there's 10 games left. It's the way it goes sometimes. It's something that happened, and Sooby did good. He came back and was really in shape. He looked really good out there. It's something [where] we're lucky in that group. We're confident with either goalie that's going to be in."

Eakin scored less than a minute after Marchessault, and Bellemare added his goal just before the end of the period.

"As soon as we realized that Soob was going in, the only thing we were thinking was, we talked to each other in the locker room saying let's make sure we're strong for him," Bellemare said. "Soob hasn't played in a while, he needed us to play a strong defensive game in front of him. We managed pretty well."

After blocking six shots in the first period, the Golden Knights finished with 17.

Tatar smacked home his own rebound to extend the lead to 4-0 with 5:39 left in the second. Sutter got his seventh of the season when he used a wrist shot to sneak the puck through Subban's legs midway through the third.