Myers scores 2 goals to spark Canucks to victory over Flames

Tyler Myers scored twice and added an assist — all of the damage inflicted in the first period — as the Vancouver Canucks built up an early 3-0 lead and cruised to a victory over the Calgary Flames on Sunday night.

With Tyler Myers inflicting the damage, a lethal Vancouver Canucks power play was the difference on Sunday night.

Myers scored twice and added an assist — all of his offence coming in the first period — as the Canucks built up an early 3-0 lead and cruised to a 5-2 victory over the Calgary Flames, their fifth win in a row.

"I've been around long enough to know now they come in bunches," said Myers, who had scored two goals on four other occasions in his 11 NHL seasons.

Myers opened the scoring on a power play at 3:29, getting his second goal of the season on a 55-foot wrist shot that beat a partially screened David Rittich.

Just over three minutes later, Myers struck again from the same distance, again on a wrist shot, only this time it came with nobody in front, his low shot squeaking through the pads of the Flames goalie.

Jake Virtanen extended the visitors' lead to 3-0 at 10:52 of the first period, striking on the man-advantage yet again. The Flames entered the night with the league's second-best penalty kill but Vancouver's fourth-best power-play made it 2-for-2 in the early going when his shot deflected in off Travis Hamonic's stick.

"I really liked our game tonight. Right from the start I thought we played simple, direct hockey," said Myers. "Played fast on the special teams. Played direct. We have to realize that type of game is going to give us success."

Virtanen's goal ended the night for Rittich, who was replaced by Cam Talbot after giving up three goals on seven shots. It's the second time he has been pulled this season. 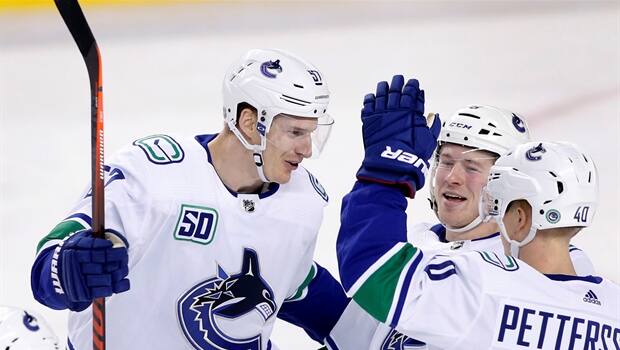 10 months ago
1:15
Tyler Myers came in with just one goal on the year but scored a pair and added an assist in the first period en route to a dominant Canucks win over Calgary.  1:15

It's the sixth game in a row that Vancouver has scored first.

"We've got to get used to playing with the lead and not take our foot off the gas pedal, keep playing our game for a full 60 (minutes) when we have the lead, kinda stomp on their throats," said Tanner Pearson, who scored the other two goals, the latter into an empty net.

The early deficit would prove to be too much to overcome for the Flames, who are winless in their last four games at home.

"For whatever reason, they were more prepared to start than we were," said Flames interim head coach Geoff Ward. "We got outworked early, we got out-executed early, then we found ourselves in a hole and then you start chasing the game."

The victory moves Vancouver (21-15-4) past Calgary and Arizona into second place in the Pacific Division. The Canucks are even in points with the Coyotes but hold a game in hand.

Rasmus Andersson and Noah Hanifin, in the game's final minute, scored for Calgary (20-16-5). The Flames are winless in their last four games at home.

"Obviously our first goal of the year is to get into the playoffs," said rookie Canucks goaltender Thatcher Demko, who had 23 stops to improve to 8-4-1. "You have to be good all year. You can't turn it on late. You've got to be solid throughout the season. Staying in the mix and getting back up towards the top of the Pacific is huge for us."

Demko got the start after Jacob Markstrom had played the last nine games including a 49-save performance against Los Angeles on Saturday. It was his first start since Dec. 7.

Calgary finally got on the scoreboard with 1:24 left in the second period.

While the teams were playing 4-on-4, Andersson jumped into the rush and neatly buried a rebound of a Sean Monahan shot to cut the deficit to 3-1.

The Canucks restored their three-goal cushion at 6:14 of the third when Pearson collected the puck in front, spun and sent a shot over Talbot's shoulder.

"We put them on the power play too much," said Flames winger Matthew Tkachuk, who had two assists. "We knew they had a good power play. We wanted to stay disciplined and it didn't happen tonight."

Vancouver finished 2-for-5 on the man-advantage while Calgary was 0-for-3.