Justin Williams lifts Hurricanes past Canucks with SO winner

Justin Williams scored the winning goal in a shootout to lift the Carolina Hurricanes over the Vancouver Canucks 4-3 on Sunday afternoon.

For the second time in four games since returning from an extended off-season, Justin Williams scored the winning goal in a shootout on Sunday as he lifted the Carolina Hurricanes to a 4-3 decision over the Vancouver Canucks.

Williams wristed a shot inside the post to the right of Thatcher Demko, giving the Hurricanes a 2-1 edge in the shootout. Carolina goalie James Reimer then used his left pad to stop Bo Horvat to clinch the win.

Hurricanes coach Rod Brind'Amour was counting on Williams' experience when he chose him as the team's third skater in the shootout. Williams also scored the shootout winner in his first game back on Jan. 19 against the New York Islanders.

"He's a pretty clutch guy. So that's your why," Brind'Amour said. "If you look at the numbers historically, he's probably one of our best. I haven't looked at it in a while, but it's a pretty easy decision throwing him out there."

Carolina is 3-1 in four games since Williams rejoined the team. Williams also scored twice in regulation in a 4-1 win over Winnipeg on Jan. 21. On Sunday, the Hurricanes got goals in regulation from Nino Niederreiter, Sebastian Aho and Andrei Svechnikov as Reimer made 32 saves. Warren Foegele had a pair of assists for Carolina. 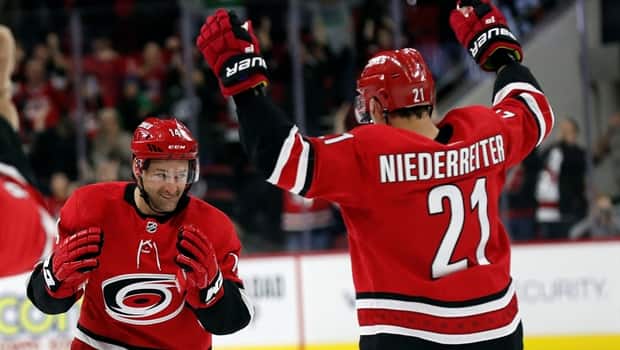 Elias Pettersson scored twice, Tyler Myers added a goal and Oscar Fantenberg and J.T. Miller each had two assists for Vancouver, whose five-game winning streak was snapped. Demko made 29 saves, including an amazing stop with the shaft of his stick in overtime against Teuvo Teravainen after a cross-ice feed from Brett Pesce.

"That was a very good hockey game," Canucks coach Travis Green said. "I thought our team was outstanding tonight. Tough game, tough building, against a team that was desperate. I thought it was a pretty intense game, probably fitting that it went into overtime and then a shootout."

Carolina, which is headed out West for a four-game road trip, wrapped up a stretch of five straight home games with three wins, one loss in regulation and an overtime loss. Just as importantly, the Hurricanes appeared to dodge what could have been a serious injury to Pesce, one of their top defencemen.

In the second period, Pesce was hit in the right wrist by a shot from the point and collapsed to the ice, which was quickly soaked with blood. He rushed off the ice and to the locker room for treatment.

Brind'Amour said it appeared that the puck hit Pesce in a vein in a spot that had no padding. But he returned in the third period and played in overtime as well after suffering an injury that left even some of his teammates feeling squeamish.

"When I saw his hand, I said, `I don't want to see that,' because it was bleeding so much," Svechnikov said.

Svechnikov, whose third-period goal had given the Hurricanes a 3-2 lead, said seeing Pesce return gave the team a boost. Later, the team got another lift when Williams took the ice for the shootout.

"He's something special in a shootout," Svechnikov said. "You just sit on the bench confident because he is going to go in and score for us."

The Canucks, meanwhile, were hardly despondent after adding a point in the standings to lift their season total to 65, which is second-best in the Western Conference. One day earlier, they posted an overtime win over the New York Islanders.

"We battled hard after playing yesterday," Myers said. "I thought we came out pretty well tonight. A lot of positive to take from tonight."