James van Riemsdyk highlighted a series of moves by former Toronto Maple Leafs players on Sunday to open NHL free agency, returning to the Philadelphia Flyers on a reported five-year, $35-million US deal.

Fresh off a career-high and team-best 36 goals, van Riemsdyk is expected to return to the Philadelphia Flyers, who drafted the six-foot-three, 220-pound left-winger second overall in 2007.

The 29-year-old's deal is reported to be five years and worth $35 million US.

Van Riemsdyk finished fifth in Maple Leafs' scoring with 54 points this past season, the durable forward's sixth in Toronto and ninth in the NHL. 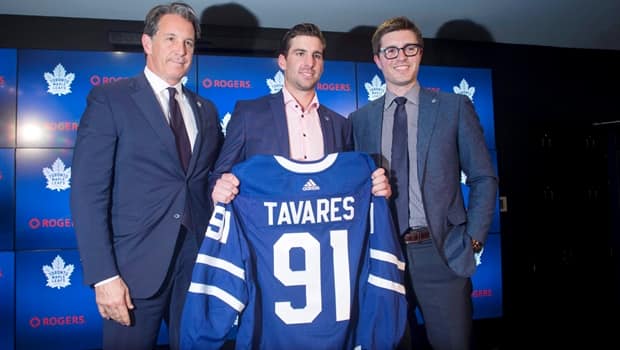 2 years agoVideo
1:53
John Tavares, Paul Stastny, James van Riemsdyk, and more big names were all on the move on the first day of free agency signings in the NHL. 1:53

The native of Middleton, N.J., has demonstrated a strong net-front presence in recent seasons and the ability to be a top-line forward with 201 points in his past 285 games.

Van Riemsdyk broke into the NHL with Philadelphia in the 2009-10 season, scoring 15 goals and 35 points.

He was traded to Toronto in June 2012 for defenceman Luke Schenn.

Van Riemsdyk's former teammate Tyler Bozak joined the St. Louis Blues on a three-year, $15 million US contract. Bozak had 11 goals and 32 assists in 81 games last season. He had a career-best 55 points the previous campaign.

The Vancouver Canucks have added three free-agent forwards to their roster, helping fill a gap left by the trio of veterans who departed last season.

Beagle and Roussel will receive an average of $3 million per year. Schaller will get an average $1.9 million annually.

Roussel, 28, had five goals and 12 assists through 73 games last season with the Dallas Stars.

The 27-year-old Schaller scored a career-high 22 points with 12 goals and 10 assists in 82 games with the Boston Bruins last season.

As expected, veteran NHL centre Tomas Plekanec is said to be returning to Montreal a one-year contract worth $2.25 million after helping guide the Leafs to the post-season for a second consecutive season.

The 35-year-old took time to settle in with Toronto after being acquired ahead of the Feb. 26 trade deadline, posting only two assists in 17 regular-season games while being a dependable player in the faceoff circle. 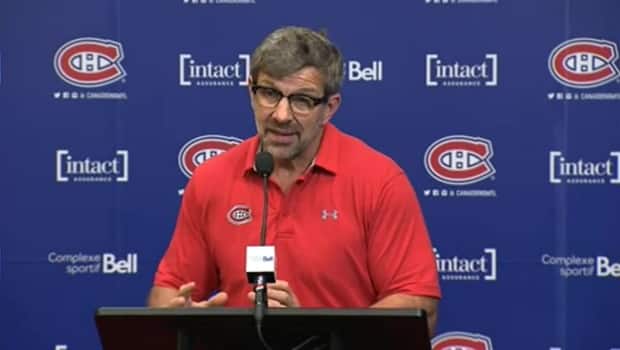 2 years agoVideo
1:53
The GM of the Montreal Canadiens evaluated his team following a quiet first day of NHL free agency. 1:53

Plekanec, who had a combined 26 points in 77 games with Montreal and the Leafs, added two goals and four points in seven playoff contests.

Montreal also signed free agent forward Matthew Peca to a two-year contract with annual salary cap hit of $1.3 million, and inked defenceman Xavier Ouellet to a one-year, one-way contract worth $750,000 in the NHL.

The five-foot-11, 170-pound Ryan totalled 28 goals and 41 assists over the last three seasons with the Hurricanes.

Calgary also agreed to a two-year, $2.5-million contract with Austin Czarnik. The 25-year-old from Detroit compiled five goals and 17 points in 59 games for the Boston Bruins over the last two seasons.

The San Jose Sharks have officially announced a eight-year contract extension worth $64 million US with centre Logan Couture.

The deal signed Sunday begins in the 2019-20 season and keeps the 29-year-old Couture under contract in San Jose through 2027 season. The sides agreed to the deal Saturday but couldn't sign it until Couture entered the final year of his $30 million, five-year contract on Sunday.

Couture was a first-round pick by San Jose in 2007 and has said he never wants to leave the franchise. The 29-year-old has 213 goals and 224 assists in 582 career games. He also has been a post-season standout, leading the NHL with 30 points in 2016 when he helped San Jose reach the Stanley Cup Final for the first time in franchise history before losing to Pittsburgh in six games.

Lightning lock up McDonagh for 7 years

The Tampa Bay Lightning have signed defenceman Ryan McDonagh to a seven-year contract extension worth $47.25 million US. The deal begins with the 2019-20 season.

General manager Steve Yzerman announced the contract Sunday, minutes after the Lightning and McDonagh were eligible to ink the extension. Tampa Bay acquired McDonagh from the New York Rangers at the trade deadline. He'll count $6.75 million against the salary cap.​

Ward and Kunitz each signed one-year deals. Ward's agreement is worth $3 million. Manning got a two-year deal.

In signing Ward, Chicago grabbed a veteran goalie on the first day of free agency after Corey Crawford missed most of last season with an upper-body injury. The Blackhawks think Crawford will be ready for training camp

Once the free-agency frenzy is completed, the focus will shift to ongoing trade speculation and negotiations involving teams attempting to lock up star players to long-term contracts. Those players include Sabres centre Ryan O'Reilly, Ottawa captain Erik Karlsson and Nashville defenceman Ryan Ellis.

With files from The Canadian Press, The Associated Press and Field Level Media