Troy Terry scored the winner in the seventh round of a shootout as the United States defeated Russia 4-3 Wednesday in a world junior hockey championship semifinal. 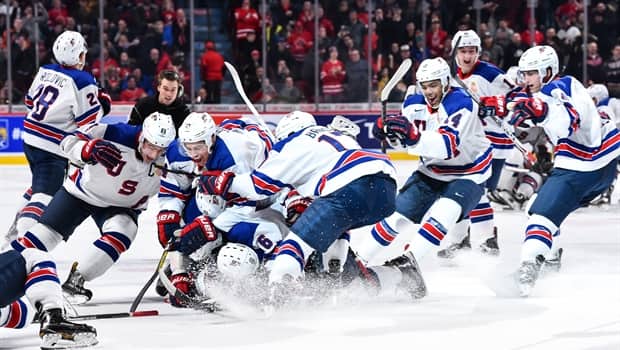 4 years agoVideo
0:43
The United States defeated Russia 4-3 in a shootout on Wednesday to punch their ticket to the World Junior Hockey Championship final. 0:43

Troy Terry left his teammates — and himself — at a loss for words after sending the Americans to the world junior hockey championship final in Montreal.

Terry scored the winner in the seventh round of a shootout as the United States defeated Russia 4-3 on Wednesday in an entertaining back-and-forth semifinal. The Anaheim Ducks prospect took three shootout attempts for the U.S. and scored five-hole on all three.

"I'm just trying to gather my words here," the 19-year-old Terry said shortly after the game. "I'm still shaking a little bit. (Russia's Ilya Samsonov) is such a big goalie, I felt the best way to score on him was going five-hole. The second and third time, I was just trying to figure it out as I went down."

Terry, a fifth-round draft pick in 2015, scored on Samsonov in the sixth round of the shootout to keep the Americans alive after Denis Guryanov put Russia ahead. Terry then put away the winner right after Alexander Polunin hit the crossbar for Russia.

"He's been great in practice in shootout and it was fun to see that tonight," said Colin White, who scored twice in regulation time for the Americans.

The U.S. will face either Canada or Sweden in the final on Thursday, depending on the outcome of that semifinal match later Wednesday.

"He's a guy who we knew has unbelievable skill as a player," said defenceman Charlie McAvoy of Terry. "He's got ice in his veins and he proved that tonight."

There was some controversy in the shootout.

The Russians, leading after three rounds, celebrated as if they had won the game. But new IIHF rules from this year state that playoff games that are tied after overtime go to a five-round shootout, not three.

"We were so excited after the third shootout when our goalie saved it," admitted Montreal Canadiens prospect Mikhail Sergachev. "But I don't know."

"Obviously we knew the regulations," said Russian coach Valeri Bragin. "It was one player maybe because of emotions he thought that, but we knew it was five shots."

Down 2-1 in the second period, the Americans scored back-to-back goals.

Luke Kunin got the first on the power play at 10:23, completing a beautiful tic-tac-toe play. White put the Americans in front six minutes later when his wrist shot from the left face-off dot took a deflection off Russian defenceman Yegor Rykov.

Clayton Keller could have put the game to bed for the Americans when he was awarded a penalty shot at 5:14 of the third. White went high with his backhand but Samsonov made a nice glove save.

Guryanov tied things up at 3-3 less than a minute later, beating Tyler Parsons between the legs on a breakaway.

After a 10-minute overtime period, the Americans scored four goals in the shootout to Russia's three. It is the first time the U.S. has defeated Russia in the knockout round at the world junior hockey championship. They were previously 0-7.

"That gave us a little edge," said White of the winless streak. "It was more than just a game. Knowing we lost seven times in a row, we had to do this for more than ourselves, for our country, and we pulled it off."

Kirill Kaprizov continued his electrifying tournament, scoring on a wraparound at 11:54 of the first period to get the Russians on the board. It was the first time the Americans trailed in this tournament.

White tied it up with his first goal of the game from the corner of the ice with 55 seconds remaining in the first period.

Guryanov put the Russians back in front 2-1 at 1:17 of the second period.

"A lot of parts of it were just a terrific hockey game," said U.S. head coach Bob Motzko. "Back and forth, great talent. The players left it on the line. It was tremendous hockey.

"This is a special win for us."