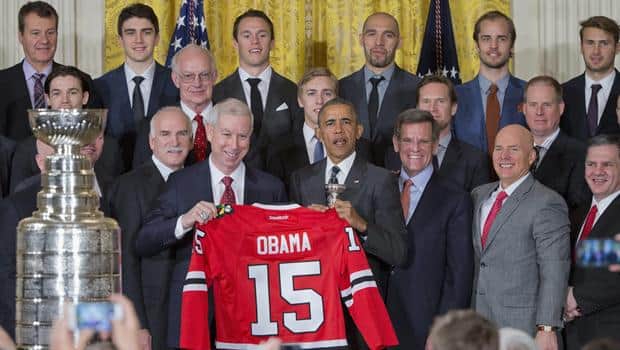 5 years ago
1:21
US President Barack Obama honoured the Chicago Blackhawks 2014-15 Stanley Cup win at the White House on Thursday. 1:21

With the team huddled behind him at the White House, Obama mentioned the state visit on March 10 and quipped that they may just leave the Cup "in the middle of the room to gloat a little bit."

Trudeau replied on Twitter late Thursday by saying he'd go to Washington "with Canada's Olympic hockey golds from, oh, how about 2002 & 2010?"

Canada defeated the United States 5-2 in the gold medal final in Salt Late City in 2002 and won gold again in 2010 in Vancouver when Sidney Crosby scored his "golden goal" to defeat the Americans 3-2 in overtime.

Obama took credit for the Blackhawks' performance during the ceremony Thursday, noting the team had gone nearly a half century without winning the NHL trophy before he took office.

He said the Stanley Cup hat trick made it "pretty clear the kind of luck" he has brought to the team. Chicago won its third title in six seasons by defeating Tampa Bay last June. Its previous titles came in 2010 and 2013.