John Tavares provided the bulk of the offence, yet it was goaltender Frederik Andersen who was the difference for Toronto against Vancouver.

Tavares had two goals and an assist and the Maple Leafs snapped Vancouver's two-game winning streak with a 4-1 victory over the Canucks on Tuesday night.

Auston Matthews and Zach Hyman also scored for the Leafs (15-13-4), who have won the opening two games of a four-game trip. Mitch Marner and Justin Holl each had two assists.

Toronto is 6-3-0 since Sheldon Keefe replaced Mike Babcock as coach. 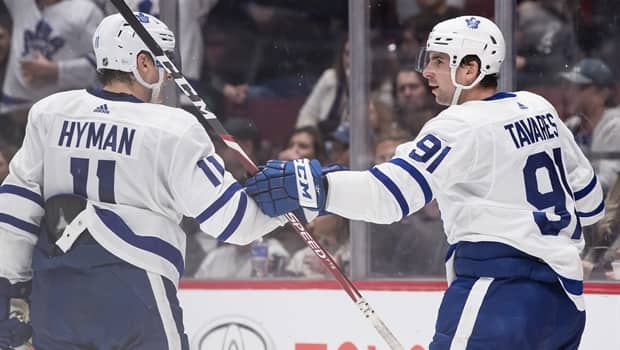 Andersen made 38 saves, including stopping Vancouver's Brock Boeser on three breakaways, two in the third period.

"He was phenomenal," Tavares said of Andersen. "They made some plays behind us and he came up big and really gave us a great chance to win."

Head coach Sheldon Keefe said without Andersen the game could have had a different result.

"We know if we make a mistake, he's going to be there," said Keefe. "It's great that he was up to the challenge for us. Those are game-changing saves that you need."

Andersen said he was reading what the Canucks were showing, then reacting.

"It's fun to make the saves and be a difference maker and try to help the team," he said. "They took care of everything in [the Vancouver] end and came up with some huge goals."

Tavares scored his second goal at 14:58 of the third period, taking a pass from Marner and scoring on a shot into the upper corner to make it 3-1.

Leivo, a former Maple Leaf, scored Vancouver's goal at 11:14 of the third during a goal-mouth scramble. It was his seventh of the season and fourth in four games.

Tavares made a nice play on the game's opening goal at 1:45 of the second period. The Leafs' captain collected a puck off the boards behind the Canucks goal after a shot by Holl. He passed out front to an open Matthews, who scored his 19th of the season.

The Leafs went ahead 2-0 with just 20 seconds left in the period when Tavares deflected a shot by Cody Ceci past Markstrom.

The Canucks' best scoring chance of the period came off a J.T Miller tip that a sliding Andersen got a piece of.

While not happy with the final score the Canucks took some solace in how they played. Vancouver hit two crossbars in the third period.

"We had a lot of chances," said Leivo, who had an ice pack on his left ankle. "I don't think we should be down on the way we played. We battled; we had a lot of shots.

"Anderson stood on his head and played really well."

Vancouver's Micheal Ferland earned some loud cheers when he flattened Toronto's Alexander Kerfoot and Ceci with bruising hits on the same shift. Ferland, who was playing in just his second game after missing 17 with a concussion, played just one shift in the second period then left the game and didn't return.