Derick Brassard and Mark Stone each had two goals and an assist while Erik Karlsson had three assists as the Ottawa Senators beat the Toronto Maple Leafs 6-3 on Saturday.

​The Ottawa Senators were able to slow down the Toronto Maple Leafs enough to collect a 6-3 win Saturday night, but the victory came with some bad news.

Forward Bobby Ryan left the game in the second period with a broken index finger on his right hand and will be lost to the team for at least four weeks. It's the same finger he broke in a game against the Leafs last February.

"I feel terrible for him. He was having a tremendous start to the season and he was working so hard," Senators coach Guy Boucher said. 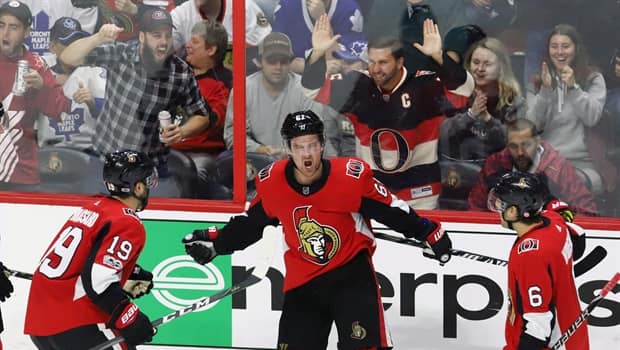 "At least it's not a lower-body injury, which would be the end of the world, so he can continue to work his legs and on his stamina for when he's ready to come back."

Derick Brassard and Mark Stone each had two goals and an assist while Erik Karlsson had three assists in the win, the first in five tries on home ice for the Senators this season.

Nate Thompson and Ryan Dzingel also scored for the Senators (4-1-3). Craig Anderson made his seventh start of the season and had 28 saves for the win.

The loss also became the first blemish on the Leafs' road record as they had entered the game with three wins in three attempts.

Trailing 3-0 entering the final period, the Leafs struck quickly with goals from van Riemsdyk and Matthews at six minutes and 8:34 respectively, but Stone gave the Senators a two-goal cushion just seven seconds after Matthews' goal for a 4-2 Senators lead.

"You have to realize that you're not going to get too many opportunities with the type of trap they play,' Matthews said.

"You have to have a lot of patience and capitalize on opportunities."

Nylander scored on the power play at 12:52, pulling the Leafs to within a goal but they would get no closer. Brassard scored at 16:30 and Stone added an empty netter at 18:21.

"I think we struggled in the neutral zone and weren't able to do what we wanted to do with the puck," Nylander said.

"They clog up the neutral zone and the minute you turn the puck over they get it deep and get on our [defence] to create offence."

Struggling in the third period is something the Senators had difficulty was last season, as well as last Thursday when they blew a 4-2 lead in before losing in overtime to the New Jersey Devils.

"I think we're a really good third-period team but we still need some work and we realize that we have to focus on that. At the end of the day we got away with it."

On the strength of a first-period goal and two more in the second the Senators were able to take that apparent comfortable 3-0 lead into the third.

Thompson collected his first goal as a Senator when he smacked in a rebound at 12:01 of the first period as Andersen had his back to the puck and his head in the net following a mass scramble in front of the goal.

That advantage was increased to 2-0 when Dzingel tipped a Karlsson point shot off the glove of Andersen and in at 14:20 of the second period.

The Senators kept pressing and made it a 3-0 game with just 12 seconds to play in the second period when Brassard took a cross-ice pass from Ryan off his skates and then beat Andersen on the stick side. 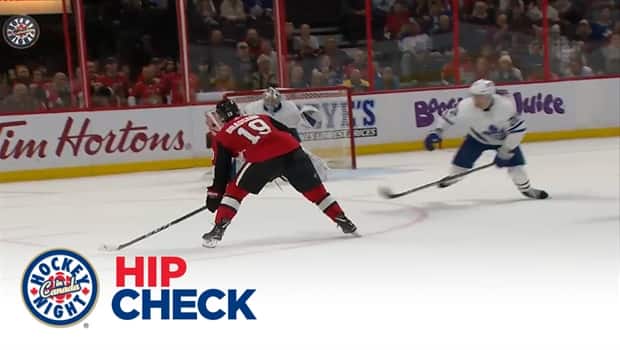 The Battle of Ontario is back!