Ron Hainsey and Nazem Kadri scored 37 seconds apart in the second period and Frederik Andersen made 33 saves as the Toronto Maple Leafs stretched their winning run to six games with a 6-0 victory over the Montreal Canadiens on Saturday night.

It took Auston Matthews only two periods to get into his groove.

The Maple Leafs star centre, who returned after missing four games with an upper-body injury, scored twice in the third period as Toronto routed the rival Montreal Canadiens 6-0 behind a second straight shutout from goaltender Frederik Andersen on Saturday night. 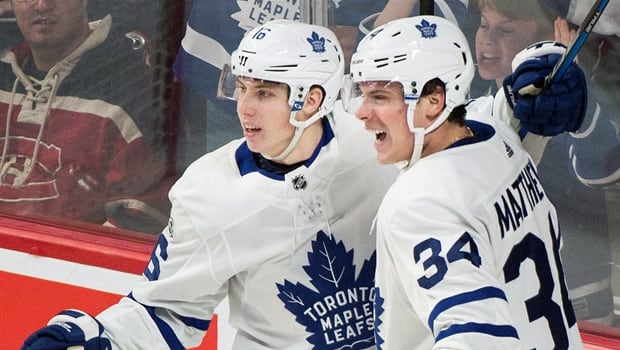 3 years agoVideo
1:44
Auston Matthews scored two goals in his return from injury and Frederik Andersen made 33 saves in recording back-to-back shutouts, as Toronto beat up on Montreal 6-0 1:44

Matthews' first goal, when he was left alone in front to take a pass from Mitch Marner and score, chased starting goalie Charlie Lindgren at 8:59 of the third frame.

His second of the game, a rocket wrist shot to the top corner from the left circle on a rush, gave backup goalie Antti Niemi no chance.

"It feels good to be back," said Matthews. "I didn't feel too hot out there the first two periods but I think it's all part of coming back and not playing in four games.

"There's obviously room for improvement, but coming into this building, it's not going to be easy. A big win tonight for sure. Our goalie was unbelievable again."

The Canadiens controlled most of the play in the opening 20 minutes, outshooting Toronto 16-6, but couldn't beat Andersen, who was coming off a 42-save shutout in a 1-0 win over New Jersey.

Goals 37 seconds apart by Ron Hainsey and Nazem Kadri in the second period and tallies in the third by James van Riemsdyk and Connor Brown put the game away for Toronto (14-7-0). Matthews' late goals were icing on the cake as the Leafs stretched their winning streak to six games.

Montreal (8-11-2) is winless in its last three games. After playing 10 of their first 15 games on the road, the Canadiens hoped to catch up on home ice but ended their six-game homestand at 2-3-1. 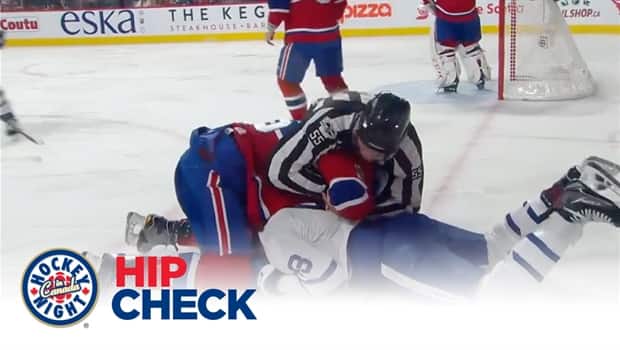 Hip Check: Nazem Kadri and the Maple Leafs had an eventful night, to say the least...

3 years agoVideo
0:27
After a questionable hit by Pacioretty, Kadri retaliates with one of his own. 0:27

Lindgren allowed five goals (on 27 shots) for a second game in a row and was replaced by Niemi, who conceded a goal on four shots in his first action since he was claimed off waivers this week.

"We had a good performance in the first half but we collapsed in the second period," said Montreal coach Claude Julien. "The scoreline says it all."

Toronto coach Mike Babcock juggled his lines after the first period and it worked. That included putting Matthews and Marner together (along with Matt Martin), a combination that has not always been effective. Marner assisted on both Matthews goals.

"It went well," said Matthews. "We've got so many good players on our team, so many skilled guys that can make plays.

"Obviously me and Mitch have a good relationship off the ice, Marty as well, so it kind of gives you a nice spark when you play with a couple of buddies that you don't get to play with a lot. I think that goes for all four lines. We got a bit of time together last year. I guess we made some plays and had a lot of fun but I don't think we even scored a goal, so it's nice to get out there with him and create some offence and put some in the net."

Andersen had just made a smart glove save on Brendan Gallagher from the slot when the Leafs opened the scoring at 12:07. Hainsey got his first of the season with a shot from the point that Lindgren lost behind van Riemsdyk's screen.

Kadri scored on Toronto's next shot, a wrister from a bad angle that went in off Lindgren's shoulder at 12:44, to extend his points streak to six games.

Brown scored 25 seconds into the third when he lifted the rebound of Nikita Zaitsev's point shot over Lindgren from the doorstep. A Tyler Bozak pass went off Karl Alzner to van Riemsdyk, who flipped in his 10th of the season from close range at 8:11.

Another milestone for Matthews

The first-overall draft pick of 2016 has a milestone game at home on Monday night when his hometown team, the Arizona Coyotes, visit the Air Canada Centre. It will be Matthews' 100th NHL game.

The Leafs, who had not beaten Montreal in two years, have posted two wins in a row against the Habs for the first time since 2013. Toronto won 4-3 in overtime against Montreal on Oct. 14.

To mark the NHL's upcoming 100th anniversary, six Hall of Famers took part in the ceremonial faceoff — Dave Keon, Yvon Cournoyer, Rod Gilbert, Frank Mahovlich, Ray Bourque and Denis Savard. Mahovlich and Savard went out in a Red Wings and Blackhawks jersey respectively, but took them off to reveal Canadiens sweaters underneath. Both ended their careers in Montreal.