Leafs get Wild to stroll into new year on winning high

Auston Matthews and William Nylander each had a goal and an assist and the Toronto Maple Leafs beat the Minnesota Wild 4-1 Tuesday night.

For the first time in four games, the Toronto Maple Leafs didn't have to play catch-up.

Auston Matthews and William Nylander each had a goal and an assist and Toronto beat Minnesota 4-1 Tuesday night.

Alexander Kerfoot also scored, and John Tavares added an empty-net goal for Toronto, which got 26 saves from Frederik Andersen, who was named a first-time all-star on Monday.

The Maple Leafs are 7-0-1 in their last eight games, and have won 13 of 18 games since Sheldon Keefe took over as coach. 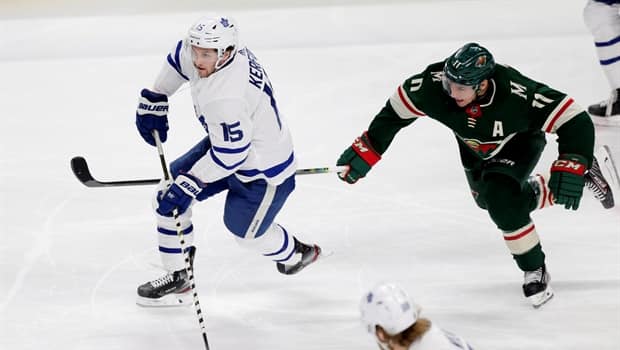 1 year agoVideo
1:37
Both Auston Matthews and William Nylander had a goal and an assist in Toronto's 4-1 victory over Minnesota. 1:37

"I think we're starting to have a really good feel of the way we want to play. We can still be better, but certainly I think the things he's implemented have really translated well with the skill-set of our team, the type of players we have and his message," Tavares said.

"Whether we're up in a game, down in a game, we believe we can beat anyone, and we believe we're going to find a way to win in any situation," Kerfoot said. "When you got that attitude and that belief, it can go a long way."

Toronto faced two-goal deficits in each of its past three games, yet rallied to beat Carolina and New Jersey, before losing in overtime to the New York Rangers.

"We've handled all sorts of different situations. We're gaining experience from that, whether it's playing with a lead and scoring early, and then giving it up and having to find our way back or playing from behind and finding our way back, having a lead and then giving up goals in bunches and figuring that out," Keefe said.

Ryan Suter had a goal and Devan Dubnyk made 25 saves for Minnesota. The Wild, 10-4-3 at home, lost the first two games of a stretch in which they play 16 of 19 games at Xcel Energy Center.

Minnesota scored once in each loss.

"It's two games, so I don't want to get into that. We'll figure that out," said captain Mikko Koivu, who returned to the lineup after missing 12 games with a lower-body injury.

Coach Bruce Boudreau things Wild shooters need to keep it simple. "I think, personally, we try to make the difficult plays instead of the simple plays a lot of times. And it gets turned over."

Moments after a "Let's Go Wild!" chant began to offset a loud "Go Leafs Go!" from fans supporting the visitors, Matthews completed a perfect tic-tac-toe passing play with Nylander and Mitchell Marner to make it 3-0 on the power-play midway through the second period.

Matthews has eight goals and six assists in his last seven games. His 27 goals are second in the league; Boston's David Pastrnak has 29.

Suter scored on the power play to get the Wild within 3-1 later in the second period. Andersen was screened by Koivu.

Kerfoot scored off a pass from Tavares less than six minutes into the game for a 1-0 lead. Toronto made it 2-0 with 30.2 seconds left in the opening period when Matthews jammed at the puck at the right post before it trickled out to Nylander, who swept it in from inside the blue paint.

Nylander has goals in four straight games and six in his past seven. He also has five assists in that seven-game span.