These are sorry times for the Habs and their fans

It's clear the Montreal Canadiens are small up front, slow on the blue-line and usually standout goalie Carey Price has yet to find the form that has bailed out his teammates in the past. The team's 1-6-1 record also has fans at a loss.

Kilgour's, which has a barstool made out of an authentic blue seat from the old Montreal Forum, is the establishment where Canadiens fans congregate in Toronto to watch Montreal play. Even when the Canadiens play the Toronto Maple Leafs, the haunt is 70 per cent full of Montreal fans.

It didn't matter Friday's start time was 10 p.m. ET. Habs fans filtered into the joint with hopes the early season doldrums were going to end against the Ryan Getzlaf-less Anaheim Ducks.

But the Canadiens didn't start well. There was disappointment and dissatisfaction in the air after the opening 20 minutes, when the Canadiens fell behind 3-0. But the frustration was replaced with optimism when Paul Byron and Brendan Gallagher scored to pull Montreal within one in the second period.

The third period, however, was a major downer. The Ducks scored three times in 97 seconds to hand the Habs their seventh straight loss. After Anaheim's sixth goal, Canadiens usually cool customer in goal, Carey Price, smashed his stick twice against his goalpost in a fit of anger. 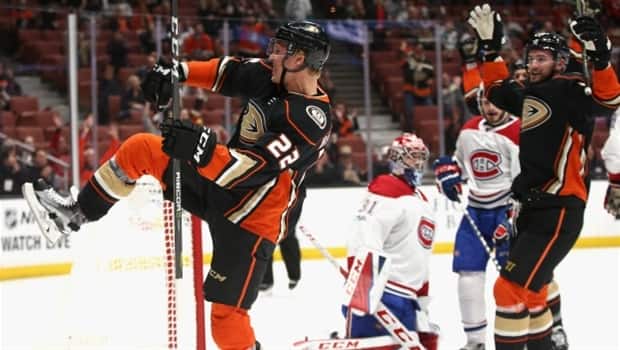 Yes, these are sorry times for the storied Canadiens franchise and its fans. At 1-6-1, the Habs are last in the Eastern Conference and they are enduring their worst eight-game start since going 1-6-1 to start the 1941-42 season.

"The mood in the bar was not good," owner Peter Kilgour said. "After that first period, they regrouped and then you had a feeling of what's going on.

"Carey Price looks human, which is bad. But I'm not pushing the panic button just yet. I know most of the Montreal fans are and I'm sure there is plenty of panic in Montreal. But if they're within 10 points of a playoff spot at Christmas time, they still have a chance."

Kilgour goes on to theorize among the bad moves made by beleaguered Canadiens general manager Marc Bergevin, the worst was not to re-sign 38-year-old defenceman Andrei Markov.

"He's a leader," Kilgour said. "They don't call him the general for nothing. All he wanted was a two-year deal."

But the Habs problems go deeper than missing Markov. They are small up front, slow on the blue-line and Price has yet to find the form that has bailed out his teammates in the past.

Bergevin often has remarked his desire to build a team that is tough to play against in his six years at the helm of the Habs.

Teams can be tough to play against by being physical, fast, skillful and tactically patient like the Ottawa Senators. The Canadiens are neither. This team has big issues. They have a lot of square pegs trying to fit into round holes. They have no playmaker in the middle.

Newcomer Jonathan Drouin is better on the wing than at centre. Whipping boy Alex Galchenyuk is better at centre than the wing. Tomas Plekanec is no longer a second-line centre. The lack of size up front just fails to carve out any space for these forwards to buzz and create.

With the exception of 19-year-old Victor Mete, the defencemen simply have been too slow. They are slow to retrieve pucks and slow to cover opponents around the crease.

There are no easy answers for the Canadiens right now. They can't even play a defence-first game because of their weak group of blue-liners and lack of size to dominate play along the boards.

But Montreal does have one of the game's best coaches in Claude Julien and the game's best goalie in Price. Eventually, Price is going to start tending goal like his old self, and Julien will be able to cajole what he has on his roster to gain a few points.

But these are tough times for Habs fans. It's a good thing there is some booze behind the bar at Kilgour's.