Your guide to the NHL's new rules

As usual, the league passed some rule changes over the summer. And it seems like some of them might backfire. Here are the biggest differences you'll notice when the puck drops in less than two weeks.

Here are the pros and cons to the latest tweaks

As usual, the NHL passed some rule changes over the summer. And it seems like some of them have the potential to backfire.

Here are the biggest differences you'll notice when the puck drops in less than two weeks:

New rule: Video review will be used on every major penalty (except for fighting)

The details: After making the call, referees will be required to watch replays on those little tablet devices to decide whether to stick with the five-minute major or reduce it to a two-minute minor. They're not allowed to erase the penalty altogether. Refs will also have the option to review their four-minute double-minor calls for high sticking. They can either confirm it or rescind it. They can't reduce it to two minutes. And no penalty can be increased from the initial call.

Why you might like this: It should help erase the kind of atrocious decision we saw in Game 7 of the Vegas-San Jose playoff series. A referee reacted to a scary fall by San Jose's Joe Pavelski by calling a major on a Vegas player, but replays showed Pavelski really just lost his balance after a light cross-check. It was maybe worth a two-minute penalty. But San Jose scored four times on the ensuing five-minute power play to erase a 3-0 deficit and eventually won the series in overtime. In fact, the new rule seems like an obvious knee-jerk reaction to this exact play.

Why you might hate this: Video reviews are really boring, and these ones could take awhile. Parsing penalties seems more complicated than deciding whether, say, a puck crossed the goal-line or a player was offside — and those reviews aren't exactly done in a timely fashion. Also, video review can't be used to add a penalty. So fans will still be whining about that obvious penalty against their team that the refs missed.

The details: They were already allowed to ask officials to look for goalie interference or offside on plays that result in a goal. Now they can demand a replay if they think a play should have been whistled dead before a goal for the puck going into the netting or a high-sticked puck or hand pass in the offensive zone. Coaches can now challenge as many plays as they want, but it gets riskier after they get one wrong. The penalty for the first unsuccessful challenge is two minutes. It's four minutes for each one after that.

Why you might like this: There's now less chance your favourite team will get wronged like the Blues did in the playoffs when the Sharks beat them in OT after an obvious hand pass. It'll also be interesting to see which coaches are bold enough to challenge when a possible four-minute penalty is dangling over them.

Why you might hate this: Again, video reviews are boring. And coaches now have more opportunities to ask for them. 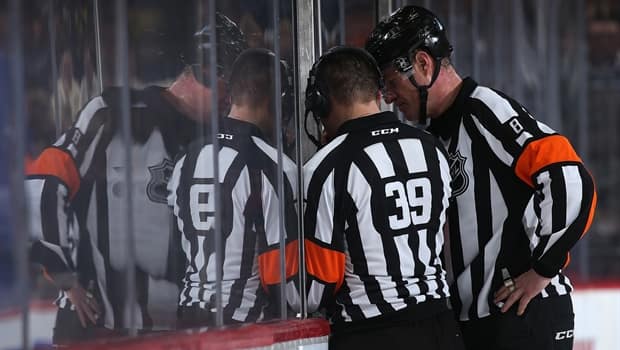 A closer look at the NHL's new rules

1 year ago
1:35
Referees in the NHL took a beating in the playoffs this year, and the league is taking steps to avoid it happing in the future. 1:35

New rule: There are more situations where teams aren't allowed to change lines

The details: Players were already not allowed to leave the ice after their team was called for icing. Now, there are also no line changes for a team whose goalie freezes the puck after a shot from beyond the red-line, or if one of its skaters unintentionally knocks his own net off.

Why you might like this: It disincentivizes players from taking the easy way out of difficult situations by getting a stoppage in play. As for tired players being forced to stay on the ice: Fatigue leads to mistakes. Mistakes lead to goals. Goals lead to fun.

Why you might hate this: You're concerned about the effects of lactic acid.

New rule: Teams can pick where they want certain faceoffs to happen

The details: For all those same scenarios where the no-line-change rule is applied, the offensive team on that play gets to choose the location of the ensuing faceoff in the other team's zone. Same for the first draw to start a power play. Obviously it still has to take place on one of the two dots in that zone.

If you want more details on these rule changes and the other (more minor) ones, you can read this from the league.