Facing elimination in an oh-so-hostile environment, Brad Marchand and Tuukka Rask delivered for the Boston Bruins once again. The Stanley Cup final is heading to Game 7 because two of Boston's biggest stars love the biggest moments.

Stanley Cup will be decided on Wednesday night in Boston

Facing elimination in an oh-so-hostile environment, Brad Marchand and Tuukka Rask delivered for the Boston Bruins once again.

The Stanley Cup final is heading to Game 7 because two of Boston's biggest stars love the biggest moments.

Rask made 28 saves, Marchand had a goal and an assist, and the Bruins beat the St. Louis Blues 5-1 on Sunday night to even the bruising, physical final at three games apiece.

David Pastrnak had a goal and an assist as Boston became the 17th team to go on the road and force a Game 7 in the Stanley Cup. The Bruins also were the last franchise to accomplish the feat, coming all the way back to win the championship against Vancouver in 2011. 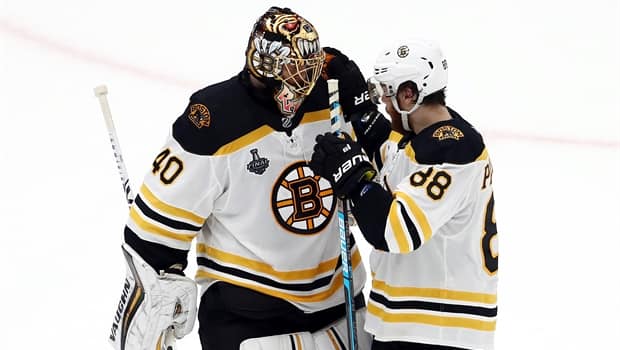 2 years ago
2:11
The Boston Bruins knocked off the St. Louis Blues 5-1 in Game 6, forcing a Stanley Cup deciding Game 7 on Wednesday. 2:11
Rask was a reserve goaltender on that team eight years ago, while Marchand was a key performer. They will go for another championship Wednesday night in Boston after losing to Chicago in the 2013 final.

Ryan O'Reilly scored in the third period for St. Louis, which is looking for the franchise's first Stanley Cup title. Rookie Jordan Binnington finished with 27 stops.

"We have to move on, get ready for the next one," O'Reilly said. "We're confident. We're a great road team. Maybe that's our story. Maybe we have to get it done on the road."

WATCH | Brad Marchand on the Bruins finding a way to win: 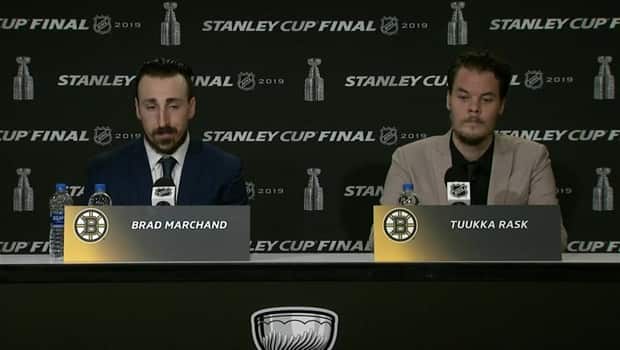 2 years ago
0:33
Bruins forward Brad Machand had a goal and an assist in the Bruins 5-1 Game 6 win over the Blues. 0:33
Backed by an electric Enterprise Center crowd that included actors Jon Hamm and Jenna Fischer and Cardinals catcher Yadier Molina, wearing a No. 49 Blues jersey in honour of suspended forward Ivan Barbashev, St. Louis looked a step off for most of the game. Prime scoring opportunities were derailed by misplaced passes or ever-so-slight timing issues.

Of course, the unflappable Rask can have that effect on a team. And whenever the Blues threatened, the 6-foot-3 Finnish star was there.

"He's our best player," Bruins defenceman Charlie McAvoy said. "He just steps up when it matters and we have all the faith in the world in him. ... He's our rock." 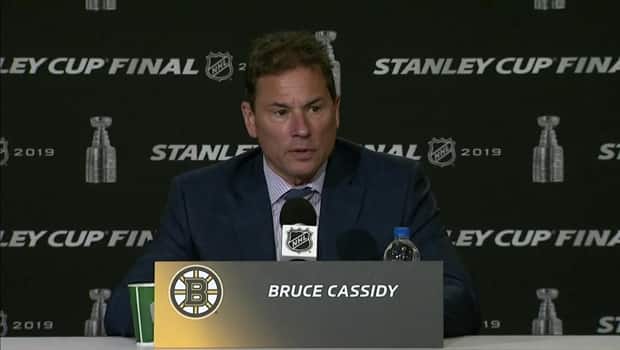 2 years ago
1:11
Boston head coach Bruce Cassidy emphasised the importance of the Bruins secondary scoring on their run to the Stanley Cup Finals. 1:11
Rask was at his best while Boston killed off four power plays, dropping St. Louis to 1 for 18 with the man advantage for the series. He smothered a big Colton Parayko slap shot with Zdeno Chara in the box near the end of the first period, and made a fancy glove stop on an even-strength try for Brayden Schenn 7:42 in the second.

He got some help after Marchand was whistled for tripping Alex Pietrangelo midway through the second. With the Blues applying heavy pressure in search of the tying goal, Pietrangelo had a backhand go off the left post and Rask's back before McAvoy knocked the puck out of the way out of midair.

WATCH | Blues coach Berube not shying away from Game 7: 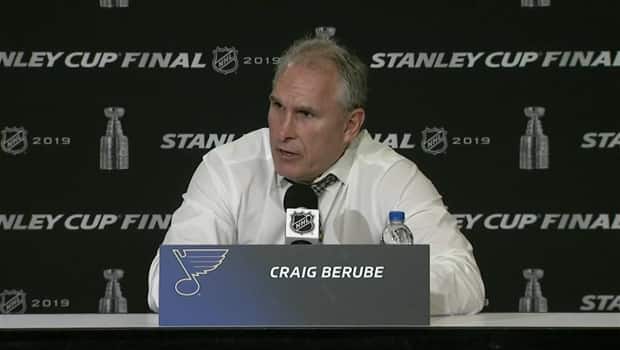 Craig Berube: 'If you told me 4 months ago we were going to be in the finals Game 7, I think I'd take it'

2 years ago
0:46
Blues head coach Craig Berube kept things in perspective after a 5-1 loss to the Bruins in Game 6 of the Stanley Cup finals. 0:46

While St. Louis came up empty on the power play, Boston used a 5-on-3 advantage to jump in front in the first. With Schenn and O'Reilly in the box, Marchand beat Binnington with a sharp-angled shot from the right circle at 8:40.

It was Marchand's first goal since he got an empty-netter in Boston's 4-2 victory in Game 1. The Bruins improved to 25-1 when the pesky veteran scores in the post-season.

Marchand and company then put it away with a four-goal third period.

Chara, playing with a broken jaw, added an empty-netter with 2:19 left. The crowd chanted "Let's Go Blues!" in the final moments, hoping to give St. Louis a boost for their trip to Boston.

"Listen, if you told me four months ago we were going to be in the finals in Game 7, I think I'd take it," Blues coach Craig Berube said. "We've been a good road team. We've won twice up there in this series, so we're a confident group."