The St. Louis Blues have been around a lot longer than the Vegas Golden Knights, but their journey over the past five months is almost as remarkable as the expansion team's run to the championship series a year ago.

It just so happens they'll play the Boston Bruins, the team who beat them in 1970

The St. Louis Blues have been around a lot longer than the Vegas Golden Knights, but their journey over the past five months is almost as remarkable as the expansion team's run to the championship series a year ago.

The Blues advanced to the Stanley Cup final with a 5-1 victory at home against the San Jose Sharks on Tuesday to take the Western Conference final in six games.

The Blues made history. They were in 31st place, dead last in the league standings on Jan. 2. A team that low in the standings has never made it to the Stanley Cup final. But five months ago rookie goalie Jordan Binnington caught fire and so did his teammates.

St. Louis not only clinched a playoff spot, they booked a ticket on Mar. 29 with eight days left in the regular season. They continued their fine play with a six-game victory in the first round against the Winnipeg Jets.

They needed to win Game 6 in the second round against the Dallas Stars to force Game 7. Hometown hero Patrick Maroon provided the happy ending with the winner in double overtime.

Their prospects looked gloomy in the West final, too. But the dreaded, undetected hand-pass goal in overtime in Game 3 to give the Sharks a 5-4 win and 2-1 series lead didn't sink the Blues.

They employed the unfortunate turn of events in their favour. Heck, a hand-pass goal proved nothing. This team was in last place. This team knows how to deal with adversity.

So St. Louis got busy again. The Sharks never had a lead the rest of the series. 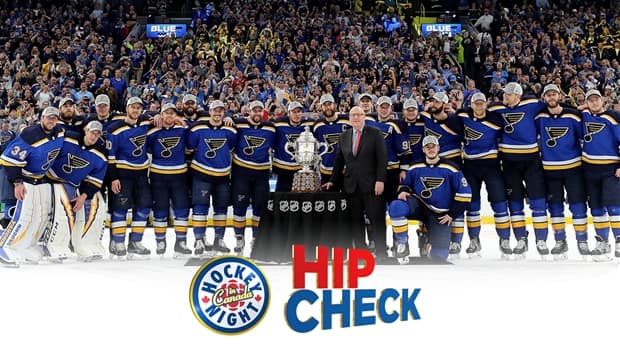 They ran out of gas. They were beaten up. Logan Couture's magic disappeared. The 28-plus minutes a game for defenceman Brent Burns had taken its toll. They played in the series finale without captain Joe Pavelski, Tomas Hertl and Erik Karlsson.

But give the Blues the credit. They complained briefly after the controversial ending to Game 3. But then they swatted away the frustration and went to work. The Blues won three in a row by a whopping combined score of 12-2.

So instead of 39-year-old Joe Thornton and the Sharks meeting his old team, the Boston Bruins, it will be 35-year-old Jay Bouwmeester and the Blues who will travel to Beantown for the series opener on Monday.

For you history buffs, it has been 49 long years since the Blues last made it to the final, and their opponent in 1970 just happened to be the Bruins.

The series ended with Orr flying through the air in overtime after he scored a goal and was tripped by St. Louis defenceman Noel Picard. The series-clinching goal for the Bruins sweep has become one of the most iconic photos in sports history.

The late Dan Kelly's call on the broadcast was memorable, too.

"Bobby Orr, behind the net to [Derek] Sanderson, to Orr. Bobby Orr scores and the Boston Bruins have won the Stanley Cup."

This edition of the Boston Bruins will have their hands full with this edition of the Blues. St. Louis has been led by rookies Binnington, Robert Thomas and the latest hero, Sammy Blais. They have strength down the middle with Brayden Schenn, Ryan O'Reilly and Tyler Bozak. They have a strong defence, led by captain Alex Pietrangelo.

Yes, they have been around a lot longer than the Golden Knights. But how the Blues fare against the Bruins will be just as interesting.