Blues move to brink of Cup final after blanking Sharks

Vladimir Tarasenko scored on a penalty shot and Jaden Schwartz added the first of his three goals during a dominant second period that carried St. Louis to the brink of its first trip to the Stanley Cup Final in nearly a half-century, with a 5-0 victory over the San Jose Sharks on Sunday in Game 5 of the Western Conference final.

From last in the league in early January all the way to the brink of their first Stanley Cup Final in nearly a half-century, it has been quite a ride for the St. Louis Blues.

A remarkable turnaround continued Sunday with perhaps their most convincing win of a charmed playoff run.

Jaden Schwartz started a dominant second period with the first of his three goals, Vladimir Tarasenko scored on a penalty shot and the Blues moved within one win of the Cup final with a 5-0 victory over the San Jose Sharks in Game 5 of the Western Conference final.

"It's probably tough to put into words," Schwartz said. "It's something that everyone's worked for and dreamed about. You don't want to look too far ahead. We all know how important and how hard that last win's going to be. It would be a dream come true."

St. Louis used a relentless forecheck to take control of the game and series in the second period, scoring twice and outshooting the beleaguered Sharks 20-6 during the frame. It also got 21 saves from Jordan Binnington in his first playoff shutout and a first-period goal from Oskar Sundqvist to overwhelm the Sharks. 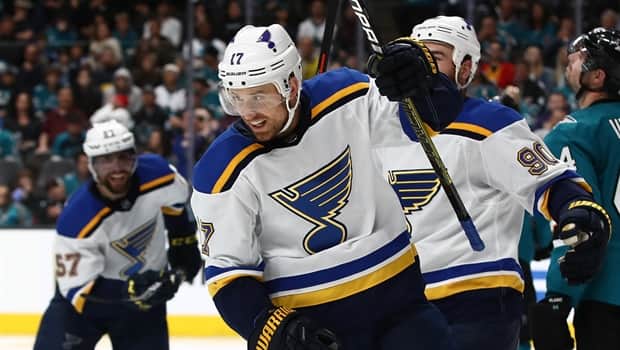 1 year ago
1:51
Jaden Schwartz recorded his 2nd hat trick of the playoffs as the St. Louis Blues beat the San Jose Sharks 5-0 and move within one win of the Stanley Cup Finals. 1:51

Schwartz added two goals in the third for his second hat trick this post-season, becoming the first player with two in one playoff run since Johan Franzen for Detroit in 2008.

The victory gave the Blues a 3-2 series lead, the closest they've been to making the final since getting there in their first three seasons as the winner of the all-expansion Western Conference. St. Louis can earn its first trip back to the final since 1970 with a win at home in Game 6 on Tuesday night, an improbable journey for a team that was last in the standings on Jan. 2.

"We're close. We're very close right now," forward Patrick Maroon said. "I think the guys know that. It's in the back of their heads, but we know that that's a good hockey team over there too and they're not going to give up."

Martin Jones made 35 saves for the Sharks but got little help from his teammates, who have been held to one goal in losing the past two games. San Jose now faces elimination for the third straight series, having overcome a 3-1 series deficit to Vegas in the first round and winning a Game 7 at home in the second round against Colorado.

"We've been here before," coach Peter DeBoer said. "Had to go on the road and win in Vegas in order to get to a Game 7. You're never comfortable when your back's against the wall like that, but we have been here before and found a way and I'm confident we can do that again."