Erik Karlsson scored 5:23 into overtime after the officials missed a hand pass by Timo Meier, and the San Jose Sharks rallied to beat the St. Louis Blues 5-4 on Wednesday night to take a 2-1 lead in the Western Conference final.

Karlsson scored 5:23 into overtime after the officials missed a hand pass by Meier, and the Sharks rallied to beat the St. Louis Blues 5-4 on Wednesday night to take a 2-1 lead in the Western Conference final.

"I think we deserved to win this game," Karlsson said. "At the end of the day I think neither team drew the shortest stick on any of the calls out there so it was a fair game."

But it was the final sequence that likely will live on long after the series is over, possibly sparking a discussion about the NHL's replay rules. 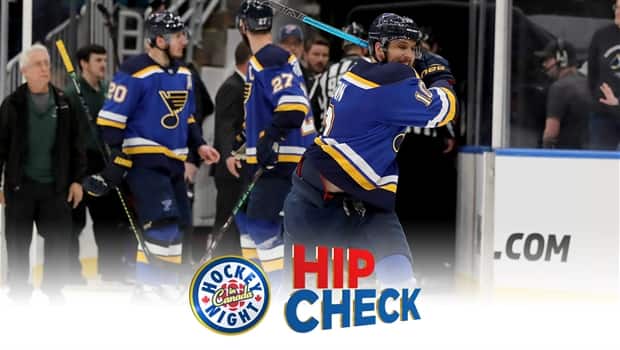 1 year ago
1:02
A hand pass, unseen by the referees, gifted the San Jose Sharks the overtime game winner in Game 3 over the St. Louis Blues. 1:02

Meier used his right hand to knock a loose puck toward the front of the net. Gustav Nyquist then passed it over to Karlsson, who beat Jordan Binnington for his second goal of the game.

"Quick play and I'm not going to comment on the officiating," Sharks coach Peter DeBoer said. "We found a way to win a game. I thought we had a great chance just before that, Timo Meier going in. It was a game of momentum swings and those quick plays happen all over the ice. Some get called, some get missed. We found a way to win."

Binnington and the Blues complained immediately. They felt the play should have been blown dead when Nyquist got the puck, but it continued.

The officials huddled while Karlsson and the Sharks celebrated, but the goal stood.

"It's a non-reviewable play," NHL Officiating Supervisor Kay Whitmore told a pool reporter. "You can read between the lines. You can figure out what you want. You watched the video. But it's just non-reviewable. I know that sounds like a cop-out answer, but that's the truth."

Blues coach Craig Berube bristled when asked about what happened.

"No explanation [from the officials]," Berube said. "What do you guys think? . There's no reason to ask me. I have nothing to say about it."

Game 4 of the best-of-seven series is Friday night in St. Louis.

"Well yeah it was a hand pass, but we're going to try and move forward and the league is going to take care of it like they've done so far in the playoffs," Blues forward David Perron said. "It's unacceptable but it's OK."

Meier was not available after the game.

The Blues led 4-3 before Logan Couture tied it with 61 seconds left in regulation. Joe Thornton scored twice for San Jose, and Martin Jones made 28 saves. 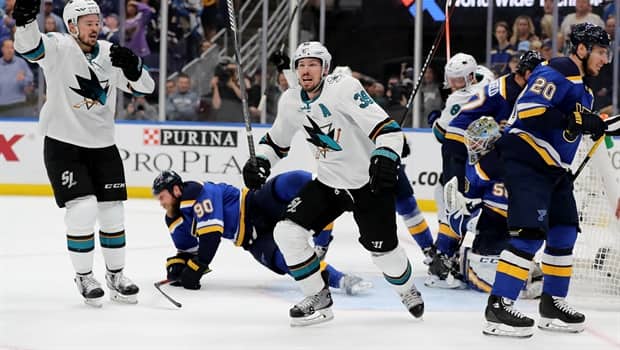 1 year ago
2:14
Erik Karlsson scored in overtime after the officials missed an apparent hand pass from Timo Meier, giving the Sharks the 5-4 win and a 2-1 series lead. 2:14

The Blues trailed 2-0 after one and 3-1 in the second before rallying.

Tarasenko, who faced criticism after a lacklustre performance in Game 1, started the comeback with his first goal in six games at 4:05 of the second. Perron tied it by beating Jones on the stick side with a wrist shot from the left dot with 3:57 left.

St. Louis went on a power play after Brent Burns took down Oskar Sundqvist late in the period. Perron scored his second goal of the series a minute later, giving the Blues the lead with their first power-play goal in 19 chances with the man advantage.

It was Perron's first multigoal playoff performance in 73 games.

After an early Blues push, the Sharks grabbed control in the first.

Blues defenceman Vince Dunn departed with 8:35 left in the first after getting hit in the face by a Brenden Dillon shot, forcing St. Louis to mix and match five defencemen.

San Jose then jumped in front when Karlsson intercepted a Joel Edmundson clearing attempt and beat Binnington with a wrist shot through traffic at 13:37.

Thornton made it 2-0 with 3:02 left in the first, scoring on a backhander after Robert Bortuzzo blocked a Marc-Edouard Vlasic shot.

Steen got the Blues on the board at 1:18 of the second, but Thornton answered 18 seconds later with his second goal of the game, giving him his first multigoal playoff game over 176 games in a 22-year career.

"Game by game, it's the playoffs," DeBoer said. "We've won stunningly, we've lost stunningly. When you get three rounds deep, you've seen it all. It's just rest and get ready for the next one."