Another huge game from San Jose's Couture wasted in loss

After the San Jose Sharks relied on a usual suspect to tie the game, the St. Louis Blues took back momentum with a tiebreaking goal from a most unlikely source.

Defenseman Robert Bortuzzo scored his first career postseason goal late in the second period that helped the Blues overcome another big game from San Jose's Logan Couture with a 4-2 victory over the Sharks on Monday night that tied the Western Conference final at one game apiece.

"It's not really my game but it's something that goes in the back of your mind," said Bortuzzo, who had scored only 14 goals in 365 regular season and playoff games before breaking through against the Sharks.

"Jaden [Schwartz] will remember, I told him if I do score a playoff goal you'll like the celebration. You never can plan what you're going to do. It's just a rush of emotion. It's an intense game out there. That's all it is, emotion coming to the surface."

After the surprising goal, Bortuzzo pumped his fist, let out a yell, and held his arms out wide for the embrace from his appreciative teammates, who needed the momentum back in their favor after Couture scored twice in a span of less than two minutes to erase a 2-0 deficit for San Jose.

WATCH | Blues even Western Final with Game 2 win over Sharks: 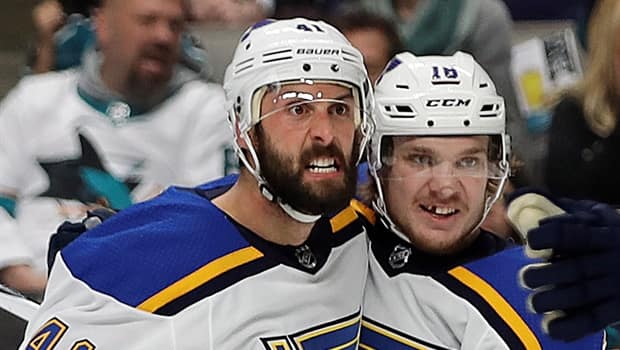 Schwartz, Vince Dunn and Oskar Sundqvist also scored and Jordan Binnington made 23 saves to send the Blues home for Game 3 on Wednesday night tied in the series.

"Pretty solid game tonight," Binnington said. "We had a good start, we were disciplined. When they tied it up, we stayed composed. That's really important, this time of year especially. We enjoyed the moment and competed hard until the end."

Couture scored his goals in a span of 1:59, giving him an NHL-leading 13 this postseason but the Sharks couldn't get anything else and lost their third straight Game 2 after winning the series opener. Martin Jones made 21 saves.

"The story of the game was we didn't have enough participants across the board," coach Peter DeBoer said. "I thought Logan Couture was pretty good, a couple of other guys ... It's tough to win this time of year if you don't have everybody going, and I thought they got contributions from everybody, like we did in the first night."

Couture tried to take over the game for the sluggish Sharks after they fell behind 2-0 in the second period on Dunn's point shot that beat Jones through a screen. The Blues were in position to add onto that lead after a questionable interference call against Marcus Sorensen when Couture single-handedly turned things around.

He took the puck from Alex Pietrangelo at the blue line and skated in on Binnington for the short-handed goal just 16 seconds into St. Louis' man advantage, waking up the crowd.

Couture struck again shortly after the penalty was killed, taking a stretch pass from Timo Meier and firing a shot between the pads for the equalizer, giving him 100 career postseason points.

The Blues then answered late in the period with thanks to Bortuzzo. He passed the puck from the point to Tyler Bozak and skated in behind Joe Thornton. He then took a pass from Joel Edmundson and beat Jones with a backhander into the top corner for his first goal in 31 playoff games.

"That was unbelievable, that whole play, the way it developed," teammate Ryan O'Reilly said. "Guys were moving, in motion, he gets it on his stick. So calm and makes that shot, one of the hardest backhands I've ever seen. We were all very impressed. That was a huge goal."

Bortuzzo added a big blocked shot in the third when Kevin Labanc got a pass in the slot with time to shoot, negating one of the few good chances San Jose had in the third. The Blues then killed off a power play later in the period before getting the insurance goal with 3:08 remaining when Alexander Steen fed Sundqvist on a rush for the goal that made it 4-2.

"We just kind of let off the gas pedal I think," Labanc said. "Gave them a little too much room to make plays. . The focus for next game is play a full 60 minutes and not give them anything for all three periods."

The Sharks were looking to avoid their pattern from the first two rounds when they followed up convincing Game 1 wins with losses at home in the next contest.

But the Blues were the more desperate team from the start and got the early lead when Schwartz finished off a give-and-go with Vladimir Tarasenko with a shot into the corner of the net from the faceoff circle just 2:34 into the game.