Predators finish off Blues to reach 1st ever West final

Ryan Johansen scored the game-winning goal 3:15 into the third period, and the Nashville Predators advanced to their first Western Conference final in franchise history Sunday by beating the St. Louis Blues 3-1 to take the series in six games. 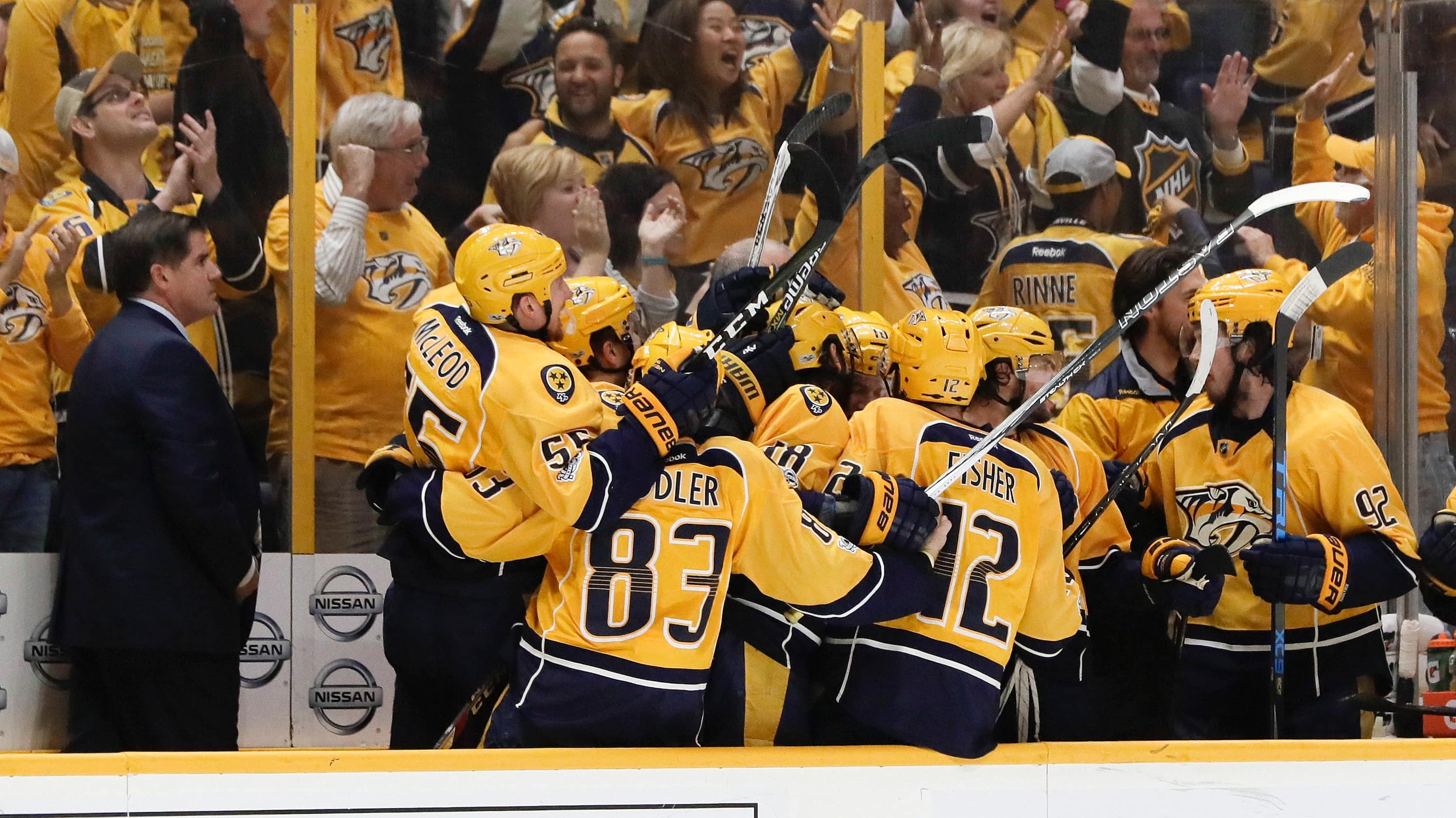 Ryan Johansen celebrated his game-winning goal with a windmill fist pump, and the Nashville Predators finished off the rest of a thrilling third period with the standing-room only crowd on their feet anticipating history.

Yes, the team that plays in a place called "Smashville" is going someplace the Predators have never been before: The Western Conference final.

Johansen scored 3:15 into the third, and the Predators advanced to the conference finals in their fourth try by beating the St. Louis Blues 3-1 to take the series in six games.

"It's a big step for the franchise," Predators defenceman Roman Josi said. "This is such a great city, such a great hockey city, I think people finally recognize that. Our fans are unbelievable."

The Predators won their ninth straight playoff game in Nashville going back to last post-season.

"It's obviously a tough building," Blues goalie Jake Allen said. "So whoever they play next is going to have their hands full."

Goalie Pekka Rinne made 23 saves and had an assist. Josi had a goal and an assist, and Calle Jarnkrok added an empty-netter with 60 seconds left.

"Right now, it means everything," Rinne said. "We haven't gotten further than this before. Obviously, it's a great feeling. There's a lot of work left. After this second round, there are only four teams left. We all know that we have what it takes and everything is in our hands. It's a good feeling. This is why you play this game. Right now, I'm pretty happy."

Nashville will play either Anaheim or Edmonton, who will play Game 7 on Wednesday night.

The Predators and Blues were tied through the first 40 minutes for a third straight game and fourth overall in this series when Johansen skated up the slot for a pass from Viktor Arvidsson and beat Allen with a backhand.

Allen kept the Blues close as he had all series, stopping Filip Forsberg on a breakaway with 13:31 left. But Jarnkrok scored with a minute to go to clinch it, amping up Nashville's celebration.

"We're halfway there," Nashville defenceman Ryan Ellis said. "We've still got a ton of work to do. Enjoy it tonight and get ready for the next series."

This was a painful loss for St. Louis. Allen ranked just behind Rinne among stingy goalies this post-season, and the Blues had been the NHL's best team after coach Mike Yeo replaced Ken Hitchcock on Feb. 1. They had been 12-1-1 on the road, including three wins in Minnesota in taking the first round.

"There were times where we felt like it was winnable, we could've come out on the other side," Yeo said of this series. "They definitely deserve to be moving on. But we feel it stinks. I hate to say it. But we'll learn from this and we'll find a way to get better."

The Predators got forward Craig Smith back for the first time in this series after he was hurt in Game 3 against Chicago in the first round. And the Blues got back left wing Alexander Steen, who missed Friday night's 2-1 win with an injury revealed after the loss to be a broken foot aggravated by blocking a shot in Game 4.

Nashville had forward Kevin Fiala, who broke his left leg in Game 1, wave the towel to rev up the fans who were ready for the puck to drop.

St. Louis took the first seven shots and went up 1-0 on Stastny's goal, a wrister just 2:04 into the game off assists from Vladimir Tarasenko and Jaden Schwartz.

Tarasenko's shot from the right circle hit off Rinne, then Stastny who knocked the puck in for the goal. The Blues even took the first two penalties of the game, and Nashville couldn't take advantage of the man advantage with sloppy puck-handling and too many turnovers.

It was the first even-strength goal the Predators had allowed in the first period this post-season. It also was only the third goal St. Louis scored in three games in Nashville, and the Blues wouldn't beat Rinne again.

The Predators needed only 35 seconds into the second to tie it up. Mattias Ekholm found Josi all alone in the right circle for a quick shot past Allen's glove. That gave Nashville defencemen nine goals this post-season, a franchise record.

Johansen, Arvidsson and Filip Forsberg came into this game having combined for only three points in this series after getting 15 in sweeping Chicago.

Johansen had an assist on Josi's goal, then scored his first goal of the series and second this post-season with Arvidsson getting his first point against St. Louis on the primary assist.