From his perch in the St. Louis Blues’ dressing room, Ryan O’Reilly gushes with gratitude over the fairytale Stanley Cup run in 2019.

Famously sitting in last place on Jan. 2, 2019, with career minor leaguer Jordan Binnington between the pipes, the Blues clinched a playoff berth March 29 and went on to hoist Lord Stanley's chalice for the first time in franchise history.

"It's an incredible thing," says O'Reilly, the Conn Smythe Trophy winner as the most valuable player in the Stanley Cup playoffs. "You never really know what's going to happen. Going from the beginning of that season and being so down and difficult, no bounces seemed to go our way. You could just see that guys kept working for each other and you could see a spark inside everyone.

"Now you get into the next season and you think about doing it again."

The drive to do it again fuels the St. Louis Blues, even in the thick of the National Hockey League season when games bleed into one another and the novelty of staying in luxury hotels is replaced by yearning for home.

Going back-to-back has become a rarity given the modern-day salary cap and free agency — the 2016-17 Pittsburgh Penguins are the only team to defend their title in the past 21 years. But the Blues believe they can repeat with a roster that is almost intact and the addition of puck-moving defenceman Justin Faulk in a trade with the Carolina Hurricanes.

"We feel like we have the team in here to try and do it again," says centre Brayden Schenn. "I know it's not easy, but you have only so many years in your career where you have a chance to win Stanley Cups."

As defending champions, the Blues (26-8-6) are the unofficial measuring stick for the other 30 teams and, as such, enjoy relatively few easy days at the office. 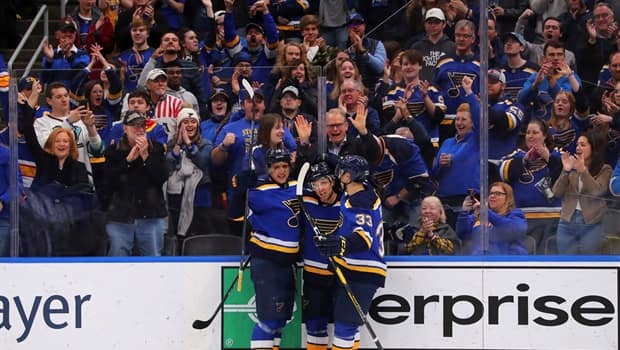 1 year ago
1:07
Jaden Schwartz scored a pair including the game-winner, Jordan Binnington stopped 25 shots and the Blues got their 8th straight victory.  1:07

Not that it seems to matter. The Blues are riding an eight-game winning streak after back-to-back victories over their Central Division rivals, the Winnipeg Jets. And they're leading the Western Conference without top goal scorer Vladimir Tarasenko, who is expected to be out until April after shoulder surgery.

"When you lose a guy like Tarasenko, other guys get an opportunity," says head coach Craig Berube. "Scoring is going to come by committee, and so far, we're getting production from a lot of different people."

They certainly are. With 40 points, David Perron is averaging a point-a-game. He is just one of six Blues with more than 30 points including Schenn (34), Jaden Schwartz (34), O'Reilly (24) and Alex Pietrangelo (31).

The Blues are ranked second in power-play efficiency and fifth on the penalty kill.

"They're never going to open their game up whether they're up one or down," says Winnipeg head coach Paul Maurice. "What I mean is that they're not going to get loose on you, so it's going to be a grinder straight through."

Even in the regular season, the Blues like to grind the opposition into submission.

And when they're not ready to go, the goaltending tandem of Binnington  (.927 save percentage, 29 wins)  and Jake Allen (.931 save percentage, seven wins.) are there to bail their teammates out.

"Our goaltending has been our best thing," says O'Reilly, the Selke Trophy winner in 2018-19 as the NHL's top defensive forward. "They've been outstanding. When we haven't been on, they've been keeping us in it and giving us a chance. They've been phenomenal."

Through 40 games, the Blues are nothing short of phenomenal, and there's no reason to expect a drop off — quite the opposite, actually, once Tarasenko returns.

"We know, with the guys here, that if we do things the right way and compete, we're going to be in a good spot to do it again," O'Reilly says. "That's our focus, and we know it's going to be tough."

They wouldn't want it any other way.