Cory Emmerton's misfire on a second and final shootout attempt allowed Finland's KalPa Kuopio to pull out a 2-1 win over the defending champions from Canada in the Spengler Cup final on Monday in Davos, Switzerland.

Jaakko Rissanen scored in the eighth round of a shootout to give Finnish club KalPa Kuopio a 2-1 win over three-time defending champion Canada in the final of the Spengler Cup on Monday.

KalPa goalie Denis Godla led his team to a 3-2 shootout win against Canada netminder Zach Fucale and his squad in Davos, Switzerland. 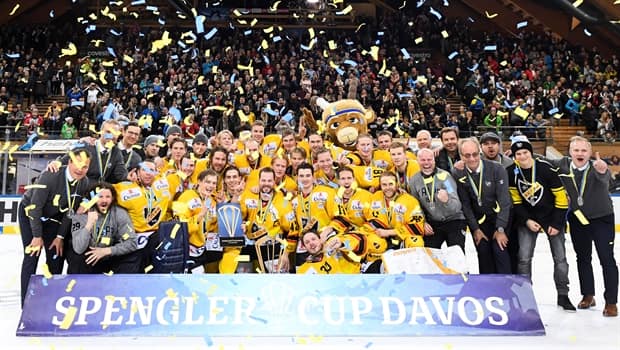 2 years agoVideo
1:46
It took a 39-save performance from Denis Godla and a shootout that went to the 8th round, but KalPa Kuopio defeated Canada 2-1 to win the 93rd Spengler Cup in their tournament debut. 1:46

Rissanen beat Fucale with a high backhand before Godla made a pad save on Canada captain Andrew Ebbett to end it.

The shootout was tied at 2-2 following three shooters each, bringing it to sudden death. Godla — the MVP of the 2015 world junior championship when he lifted Slovakia to a bronze medal in Toronto and Montreal — made five straight saves for the win.

Zach Boychuk and Cory Emmerton scored in the shootout for Canada.

The Canadians fell just short of matching their run of four consecutive Spengler Cup titles from 1995 to 1998.

Daniel Winnik opened the scoring for Canada in the third period before Eetu Luostarinen tied it.

It was KalPa's first Spengler Cup title in the history of the annual holiday tournament.