The Ottawa Senators are on the verge of a long-awaited trip back to the Eastern Conference final. 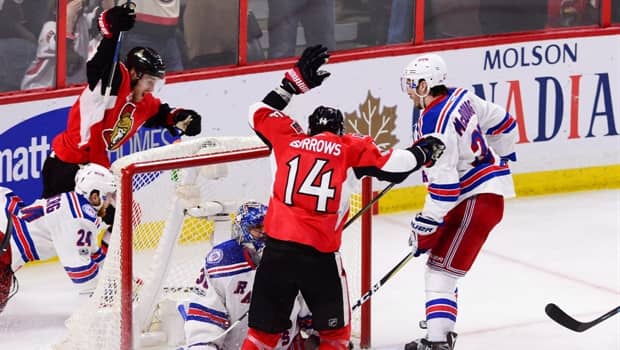 Game Wrap: Senators rally back to win Game 5 in OT

4 years agoVideo
2:05
Kyle Turris scored the game-winner in overtime, as the Ottawa Senators won 5-4 to take a 3-2 series lead over the New York Rangers 2:05

A team that's been defying the odds all season is now on the verge of the Eastern Conference final.

Kyle Turris ended Game 5 in overtime early Saturday evening as the Ottawa Senators jumped in front of the New York Rangers 3-2 in the best-of-seven second round series. One more victory and the Sens will visit the Eastern Conference final for the first time in a decade — their last appearance in 2007 preceding their first and only trip to the Stanley Cup final.

A win in Game 5 looked unlikely at many points, beginning with how it started.

The Rangers, who trailed for only four minutes and 11 seconds in the opening four games, scored twice in 66 seconds in the first frame. In fact, they've scored the first goal in all five games this series. Head coach Guy Boucher suggested before Saturday's game that he wasn't concerned by this reality, evidently warning his group otherwise.

"We've talked about not sabotaging ourselves and we were on our way to do that again," Boucher said the 5-4 Game 5 win.

But instead of sinking, as they had in dropping Games 3 and 4, the Sens rallied.

'You have to have that belief'

Mark Stone cut the deficit in half 50 seconds after Nick Holden gave New York a 2-0 lead when he outlasted Henrik Lundqvist on a rebound attempt. It was the first of three unanswered goals for Ottawa, which tied it on Mike Hoffman's third of the playoffs and then went in front on the first by fourth line forward Tom Pyatt.

"You have to have that belief. You're not going to score the first goal every game. It's not going to always go your way," Pyatt said afterward.

The Rangers pushed back hard over the back half of the second frame, eventually tied back it up and then charged back in front yet again when Jimmy Vesey stretched out to get a puck past Craig Anderson with seven minutes left in the third.

Derick Brassard said the message on the Ottawa bench was "pretty clear" at that point: Seven minutes remained to tie the game.

Brassard jumped off the bench when Anderson exited for the extra attacker and got credit for a puck that bounced around the Rangers crease before eventually crossing the goal-line with 86 seconds left. Erik Karlsson made the initial cross-ice pass through a sea of Rangers to Clarke MacArthur, whose shot eventually caromed off of Brassard and into the net.

It was exactly one week earlier that Jean-Gabriel Pageau tied Game 2 at five with 62 seconds left in regulation with the third of his four goals — the latter ending it for the Senators in double-overtime.

Boucher said his philosophy in six-on-five situations is simple: "Score."

"In the end we know that you need presence at the net," Boucher said. "The two goals are pretty similar in the sense that we had guys there and the puck went in."

Karlsson, who finished with three assists in more than 31 minutes, then fired the exit bomb from the Ottawa zone which led to Turris's winner.

Indeed, Boucher credited the play of his "top guns" for helping the Senators snatch victory from New York. In addition to the OT winner, Turris also had nine hits, nine shot attempts, and won 65 per cent of his 23 draws in almost 25 minutes.

The Sens weren't supposed to be here at this point, vying for a berth in the Eastern Conference final. While improving greatly as a defensive entity under Boucher — hired May 8, 2016 — most of the underlying numbers suggested Ottawa was due for regression at some point.

Their margins appeared too slim to last.

And yet, the Senators not only outmustered a puck-dominant Bruins squad in six games in the first round, but now stand on the verge of sliding past the Rangers, a far better team in most regards during the regular season.

Ottawa is benefiting, in some ways, from the NHL's unusual post-season format. The Sens had seven fewer regulation or overtime wins than New York during the regular season and four fewer points, but get home-ice advantage by finishing second in the Atlantic division — as opposed to New York, which landed the first wild-card spot after finishing behind Washington, Pittsburgh and Columbus.

The Sens have won all three of their games this series at Canadian Tire Centre while falling with a thud in both games at Madison Square Garden. They lost Games 3 and 4 by a combined 8-2 margin.

"We got smacked around in New York," Stone said.

That will have to change if Ottawa wants to come one step closer to an even more unlikely outcome — a potential berth in a second Stanley Cup final.

"We're not kidding ourselves," Boucher said. "We needed to win today because we know it's going to be very difficult there."