Erik Karlsson scored and added an assist to lead Ottawa to a 4-2 win over the New York Rangers on Tuesday night that sent the Senators back to the Eastern Conference final for the first time in a decade. When it was over, Guy Boucher was asked to explain Erik Karlsson.

"I'm glad he's on my team," Boucher said, a few minutes after Karlsson scored and added an assist to lead the Ottawa Senators to a 4-2 win over the New York Rangers in Game 6 of the Eastern Conference semifinal on Tuesday night. 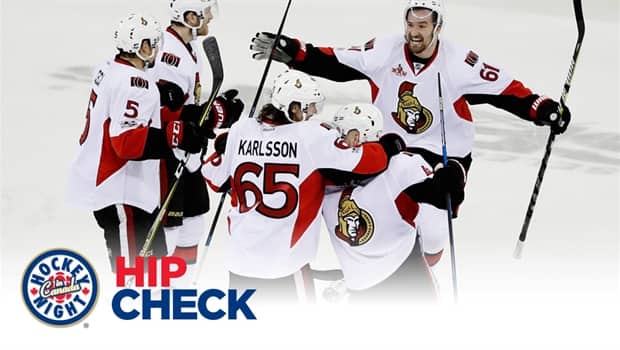 3 years ago
0:30
Ottawa Senator's captain Erik Karlsson stifled the New York Ranger's momentum late in the second period of Game 6 with a goal that would be the eventual game and series winner. 0:30

"Like all the other top quality stars that evolve into winners — whether it's the [Sidney] Crosbys or those guys — that's what he has," Boucher said.

"That's why those stars become winners."

The Senators have reached the Eastern Conference final for the third time in franchise history, making it that deep into the playoffs in 2003 and 2007.

Ottawa won its best-of-seven series with New York 4-2, and awaits the winner of the Penguins-Capitals semi.

Game 7 of that series is Wednesday at the Verizon Center in Washington D.C.

"We want more," said Mark Stone, who along with Mike Hoffman and Jean-Gabriel Pageau also scored for the Senators. Craig Anderson stopped 37-of-39 shots.

For the second time in three years, the Rangers' season ended on home ice. And for 22nd straight year, they begin their summer without a Stanley Cup to celebrate.

"It's an emotional and tough loss for everybody," New York coach Alain Vigneault said.

This might be the most painful defeat as Lundqvist turned 35 earlier this season, and there has been season-long speculation that general manager Jeff Gorton may attempt to either trade or buy out veteran defencemen Dan Girardi and Marc Staal in an attempt to get younger and free up salary cap space.

"We are just going to have to wait and see," Lundqvist said. "All you feel is disappointment and it's a numb feeling. It's not a great feeling."

Hoffman deftly redirected Karlsson's slap pass from the point 4:27 into the game to stop the Senators' series-long trend of allowing the game-opening goal. Karlsson began the sequence which culminated with Hoffman's fourth of the playoffs by blocking a Nick Holden shot before leading the rush up-ice.

'That was something we needed'

Ottawa very nearly took a 2-0 lead with 6:49 left in the period on a Karlsson slapshot from the right wing, but Lundqvist made a dazzling glove save as he fell to the ice. But there was nothing the New York goalkeeper could do on Stone's goal 1:36 later.

Stone's goal, his fourth of the playoffs, was challenged by Vigneault as the Rangers believed Kyle Turris was offside. A review upheld the ruling on the ice.

"That was something we needed," Karlsson said about playing with a lead. "We took care of the few [offensive opportunities] we got and made it hard for them to get through the neutral zone and create anything really dangerous."

Zibanejad, an ex-Senator, halved the lead with a snapshot past Anderson's glove at 13:32 of the second period.

The goal was Zibanejad's second of the playoffs. But for all intents and purposes, Karlsson's snapshot from the low slot at 15:53 ended the series. The goal was his second of the playoffs and his 13th point overall. It also finished a chain in which Mats Zuccarello's diving, desperate cross-ice pass to Zibanejad was knocked away, leading to Karlsson's counterattack with Bobby Ryan.

"That's what special players do," Stone said of Karlsson. "He's, for me, a one-of-a-kind player. You don't see guys do what he does on a night-to-night basis."

Kreider's third of the playoffs 53 seconds into the third cut the Senators' lead to 3-2. Kreider had a chance to tie the game nearly five minutes later, but Anderson's pad save kept Ottawa ahead. New York pressed in the third, but couldn't score the tying goal. The Rangers outshot Ottawa, 15-5, in the period and 38-26 for the game.

"We had a lot of chances that I think we let slip through our fingers," New York centre Derek Stepan said.

Pageau's empty-netter with seven seconds left in the third ended the scoring.