Teemu Selanne, who scored an NHL-record 76 goals in his 1992-93 rookie season and finished a 21-year career with 684 goals, was among seven nominees announced Monday for this year's Hockey Hall of Fame induction class. 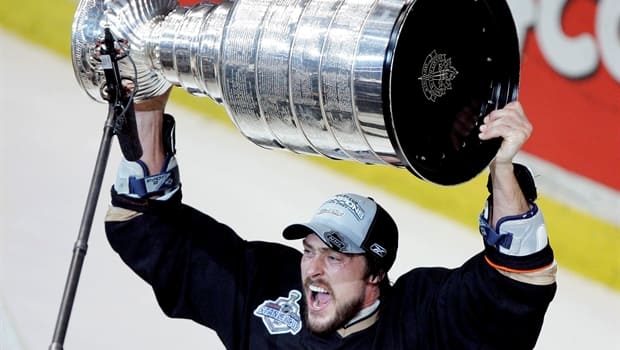 Teemu Selanne to be inducted into Hockey Hall of Fame

Teemu Selanne, who scored an NHL-record 76 goals in his rookie season with the Winnipeg Jets and finished a 21-year career with 684 goals, was among seven nominees announced Monday for this year's Hockey Hall of Fame induction class.

Selanne was particularly pleased to go into the Hall with his former linemate.

"The chemistry that we had, it was magical every night," Selanne said on a conference call.

Added Kariya: "If I didn't get the opportunity to play with him, I wouldn't be in the Hall of Fame so I'm very thankful."

"Teemu always joked that I could read his mind," said Kariya, the first-ever Ducks draft pick. "Off the ice, it wasn't hard to read: he was always watching Baywatch shows."

The induction ceremony will take place Nov. 13 at the HHOF in Toronto.

At the end of the 2013-14 season, a 43-year-old Selanne retired 11th on the all-time goals list and added 773 assists for 1,457 points in 1,451 games. He had two stints with Anaheim, where Selanne ended his playing career, after playing parts of three seasons with San Jose and one with Colorado.

The Helsinki native, affectionately known as the "Finnish Flash" for his speed, first contemplated retirement after winning the Stanley Cup with the Ducks in 2007.

In January 2015, Selanne became the first player in Ducks history to have his jersey retired. He remains the franchise leader in goals, points and games played, among numerous other categories.

At a Ducks promotional event this past January, the husband, father, son, restaurateur and reality TV star, now 46, said he was joking to friends that if he knew how much fun retirement was, he would have called it a career "years earlier."

In his life after hockey, Selanne has put in time at his restaurant in Laguna Beach, Calif., where one of his sons has worked, and appeared in the second season of Superstars, a Finnish sports reality show.

Kariya, who made it into the Hall after being passed over four times, first heard of his induction from good friend Selanne.

.<a href="https://twitter.com/TeemuSel8nne">@TeemuSel8nne</a>: "It's great that you were inducted w/ me, Paul, so we can fly together &amp; you can pick up the tab for the private plane!" 😂😂

Now 42, Kariya was forced into NHL retirement in 2010 following multiple concussions, finishing with 989 points in as many regular-season games.

"I have to thank all of the countless people in my life who helped me get here," said the native of North Vancouver, B.C. "My parents sacrificed so that I could play the game and I wouldn't be receiving this honour if it wasn't for them."

The 1997 Hart Trophy recipient as league MVP, he scored the game-tying goal for the victorious Canadians in the gold-medal game at the 2002 Salt Lake City Olympics against the United States.

After the Buffalo Sabres drafted Andreychuck 16th overall in 1982, the Hamilton native played 1,600 games over 20-plus seasons in the NHL.

He spent 11 seasons in Buffalo before moving down the Queen Elizabeth Way to Toronto, where Andreychuk scored 50 goals in the 1993-94 campaign. He retired in 2006, having scored 640 times in the regular season.

"When I look back," said Andreychuk, "I always think of hockey as a team game and it was never about me. As a player it is how we are taught and that makes this individual award even more unique."

Goyette's playing career included seven gold medals at the women's world championship along with a silver and two gold at the Olympics.

Upon her retirement in 2008, Goyette was fourth all-time in points at worlds with 68.

"The Hockey Hall of Fame is where the people I have looked up to all my life are enshrined," she said. "It will be an amazing honour for me to be with them.

Recchi played in the now-defunct International Hockey League for one season before joining the NHL's Pittsburgh Penguins on a full-time basis in 1989, the beginning of the fourth-longest regular-season career in history at 1,652 games.

The native of Kamloops, B.C., won his first Stanley Cup with Pittsburgh in 1991 and later was a champion with Carolina in 2006 and Boston in 2011, becoming only the 10th player in NHL history to win Cups with three different teams.

"It's an incredible feeling," said Recchi of being a Hall of Famer, "and the icing on the cake after 22 years of playing the game."

Jacobs has been owner and governor of the Bruins since 1975 and chairman of the NHL's board of governors the last 10 years.

"Being elected into the Hockey Hall of Fame was the furthest thing from my mind when I purchased the team over 40 years ago," said Jacobs, the 2015 recipient of the Lester Patrick Award for service to hockey in the U.S.

Six Canadian university championships are among Drake's accolades from his 28 years as head coach of the University of Alberta Golden Bears.

The two-time Canadian university coach of they year (1967-68) also won a national title at the school coaching football.

"I am truly humbled to be elected to the Hockey Hall of Fame," he said. "As a Canadian university hockey coach this honour is truly special."

with files from Associated Press