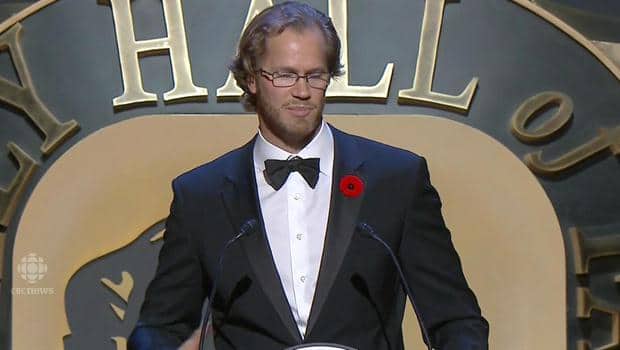 Chris Pronger on the start of his journey

5 years agoVideo
0:34
Pronger speaks about his start in hockey in Dryden, ON 0:34

Chris Pronger took more than a few physical liberties with opponents during his playing career. Intimidation was part of what made the big defenceman a Hockey Hall of Famer.

On the wrong side of the law eight times, Pronger had an "open-ended budget" for fines and suspensions.

That's his past. Now years removed from it, the bespectacled Pronger gives off the aura of a studious executive as he continues his work in the NHL's department of player safety.

Being an executive is Pronger's future, just as it was for previous Hall of Fame inductees Brendan Shanahan and Rob Blake. Pronger was once the subject of trouble and now joked that he's the "hall monitor."

"I'm learning an awful lot not only on the player safety side — I get to go to the GMs meetings and the board of governors meetings and kind of be a fly on the wall," Pronger said. "It's been a great opportunity to kind of learn the business side of the game."

Post-concussion syndrome ended Pronger's career in the fall of 2011 after he took a stick in the eye. He's still under contract through the end of the 2016-17 season and is on the Arizona Coyotes' roster after the Philadelphia Flyers traded his contract last summer.

Because it has been more than three years since his final game, the Hall of Fame clarified its bylaws to make Pronger eligible in 2015. He went in with fellow defencemen Nicklas Lidstrom, Phil Housley and Angela Ruggiero, forward Sergei Fedorov and builders Peter Karmanos Jr. and Bill Hay on what commissioner Gary Bettman called "a special night for hockey."

Fedorov thanked Wayne Gretzky for letting him stay at his house in his early days in North America and his wife, who is expected to give birth to the couple's first child. Ruggiero recalled long drives across California to play hockey when few girls were across the United States.

After handing out 61 plaques during his time working for the Hall of Fame, Hay read his own plaque with pride. Housley, after years of waiting, didn't miss his opportunity to bring his old Jofa helmet on stage with him.

Karmanos recalled the minor teams he dedicated his hockey career to, an impact that'll last longer than his Stanley Cup with the Carolina Hurricanes. As expected, Lidstrom delivered a perfect speech to go along with his near perfect career, dusting off the Swedish phrase that "Things never turn out the way you imagine."

That's certainly true for Pronger, whose career was cut short. He still has problems with his eye but called the symptoms "manageable."

Ability to control the game

"In my opinion if he's still healthy today, he could still be a good player because when he had the puck, when he didn't have the puck, he could slow the game down," Holmgren said. "He just had that innate ability to control the pace of a game because of his size and his hockey sense and his ability to make plays, his ability to defend, and he was a mean prick. That probably helped a little bit, too."

In player safety, it's Pronger's job to help Stephane Quintal and the rest of the department dole out fines and suspensions. Bettman said Pronger has been "terrific" in his job.

"I remember when we decided to bring him aboard and he wanted to be a part of it, there was some commentary about how could you take a player as skilled and terrific as he was who had been disciplined eight times and put him in player safety," Bettman said. "That's exactly what we wanted from him because he knows the game, he understands the game, he's committed to the game and I think he's thriving on the opportunity he's had to be a part of the game again."

Pronger said he has a greater appreciation now for the effect of concussions and other injuries than he did several years ago. In a fan forum over the weekend, he said concussions should continue to trend downward as players are more educated.

"I see it getting better," Pronger said. "The game is very fast and reactionary. ... It's more the targeted, predatory stuff that we're trying to eliminate."

Pronger was known for some of that himself, by his own admission. And the NHL's rules have changed to go against some of the stuff he was best at.

And yet executives still consider a place for players like Pronger today, in part because he's smart enough to adjust his game.

"The game's changed, but it's still a man's game," Calgary Flames president of hockey operations Brian Burke said. "It's still belligerence and testosterone and fearlessness. These are still valuable commodities to us."

Pronger's eagerness to play on and over the edge is also important now as he polices the NHL.

"He's been very, very successful," deputy commissioner Bill Daly said. "He's added a different insight, a different perspective, which has been very valuable to Stephane Quintal and his team. Does it surprise me? Not at all because he's a smart guy, he's thoughtful about the game."