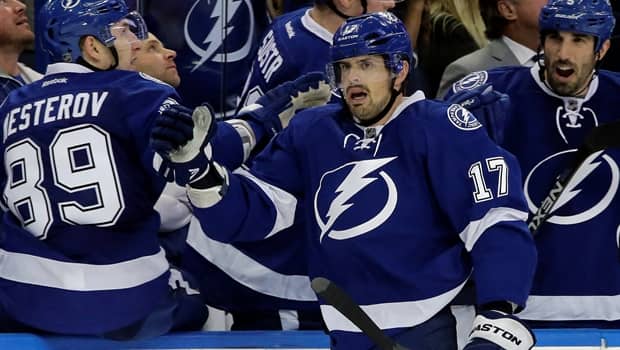 When one go-ahead goal was disallowed, the Tampa Bay Lightning kept charging and got another.

Nikita Kucherov scored twice and Alex Killorn snapped a third-period tie with his 11th career playoff goal, giving the defending Eastern Conference champions a 3-2 victory over the Detroit Red Wings in Game 1 of their first-round series on Wednesday in Tampa Bay, Fla.

Ben Bishop had 34 saves for the Lightning, who got the winner from Killorn less than two minutes after a potential go-ahead goal was waved off when Detroit coach Jeff Blashill successfully challenged that Tampa Bay was offsides before Victor Hedman scored.

"We were ready for it," Lightning forward Tyler Johnson said about the overtuned goal. "On the bench, it was `Keep going!' And we did."

"Not one ounce," of panic, Lightning coach Jon Cooper added. " Guys weren't rattled. ... Our response after that was outstanding."

Johnson, playing after hitting his head on the boards and sitting out part of Tampa Bay's regular season finale at Montreal, picked up a loose puck along the boards and fed Killorn, who deflected the puck past goalie Jimmy Howard at 8:52 of the third.

Kucherov scored in the first and second periods and also assisted on the winner.

"We did a great job coming back," Killorn said. "The goal by Kuch really helped us going into the third."

Mike Green and Justin Abdelkader scored for Detroit, which outshot the Lightning 36-34 but had few real scoring opportunities in the physical game after taking a 2-1 lead in the second period.

Bishop, who led the NHL in goals-against average and was second in save percentage, stopped five shots in the final 1:07 to seal the victory.

Game 2 of the best-of-7 series is Friday night at Amalie Arena.

"We've got to make sure that we focus on beyond the result. We've got to focus on Game 2," Blashill, Detroit's first-year coach, said. "And focusing on Game 2, I think there's things to build off here and things to get better at."

This is the second straight season Detroit and Tampa Bay have met in the opening round. The Lightning advanced in seven games in launching a run to their second Stanley Cup final appearance, and it doesn't figure to be any easier this year with leading goal scorer Steven Stamkos and defenceman Anton Stralman out with injuries.

The teams split four meetings during the regular season, each winning twice at home.

It took the Red Wings less than two minutes to turn a 1-0 deficit into a 2-1 lead, with Green scoring his 10th goal in 72 career playoff games at 2:11 of the second period, and Abdelkader beating Bishop 1:56 later with a shot through traffic that cleared the goalie's right shoulder.

Kucherov's second goal of the night — 13th in 29 career playoff games — made it 2-2 midway through the second period.

When Hedman appeared to break the tie with a shot from the slot that climbed over Howard, Blashill immediately questioned whether the Lightning should have been called for offsides. Replays clearly showed Tampa Bay was, however the Red Wings were unable to take advantage.

"When a goal gets called back like that, you would like to [capitalize]," Blashill said. "In the end, it was still a tight game and we had opportunities to go win the hockey game, and we didn't win it."

Meanwhile, the Red Wings went 0 for 5 on the power play.

"We created chances. I thought we had some good ones, but you always want to see at least one goal there," Detroit's Henrik Zetterberg said. "There were a few where we only had a few seconds on the power play, but that's how it goes."