Steve Pearce hit a tying homer in the eighth inning and a three-run double in the ninth, and the Boston Red Sox rallied from a four-run deficit for a 9-6 win over the Los Angeles Dodgers on Saturday night and a 3-1 World Series lead.

An 18-inning loss in Game 3 of the World Series couldn't wear out the Boston Red Sox. A four-run deficit late in Game 4 definitely didn't faze them.

This plucky powerhouse just kept getting big hits to move to the brink of another championship.

Steve Pearce hit a tying homer in the eighth inning and a three-run double in the ninth, and the Red Sox emphatically rallied for a 9-6 victory over the Los Angeles Dodgers on Saturday.

Pinch-hitter Rafael Devers singled home Brock Holt with the tiebreaking run in the ninth as Boston roared to a 3-1 lead in the best-of-seven matchup. 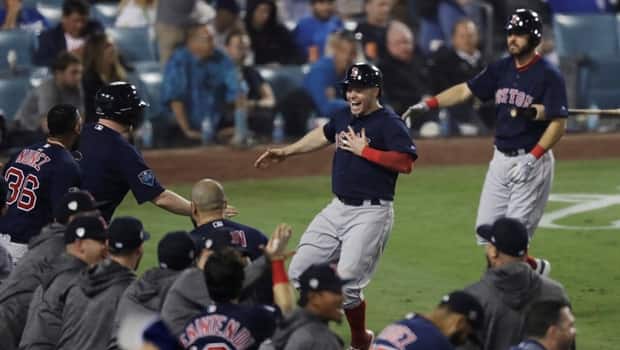 Less than a day after a wrenching, 440-minute defeat ended well past midnight in Game 3, the Red Sox trailed 4-0 in the seventh inning of Game 4 before they shook off that heartbreak, warmed up their bats and sped away from LA.

"I've never been on a team where you just get punched in the face and then come back tomorrow and act like they are totally fine," Red Sox slugger J.D. Martinez said. "It's impressive."

Game 5 is Sunday at Dodger Stadium, where the Red Sox can close out a spectacular season with their fourth title in 15 years. Boston picked Game 2 winner David Price to start on short rest over Chris Sale against fellow lefty Clayton Kershaw.

"It was just a great night, all the way around," Pearce said. "A great team win. A much-needed win, especially after what happened (in Game 3). I just love this team's fight."

The Red Sox scored just two runs in their first 24 innings at Dodger Stadium, but added nine more in the final three innings of Game 4. Sale's motivational screams in the dugout might have played a role, but whatever the reason, Boston responded splendidly to a perilous situation.

"Sometimes in October we talk about mechanics, and how you feel at the plate and all that, (but) sometimes it's will," manager Alex Cora said. "You will yourself to do great things. And it started very simple. A few good at-bats, and then the big swing, and we kept rolling and we didn't stop playing."

The Red Sox overcame a three-run deficit in a World Series game for the second time. Boston also rallied from three down against Cincinnati in 1975 in Game 6, best known for Carlton Fisk's dramatic homer in the 12th after Bernie Carbo tied it with a three-run shot.

Pearce was an unlikely candidate to join that lineage as the latest postseason hero in Boston's long October history, but the 12-year major league veteran who joined the Red Sox in June did it twice.

The 35-year-old journeyman connected off All-Star closer Kenley Jansen for a tying homer in the eighth, and cleared the bases one inning later with a double to the gap. Pearce joined Carl Yastrzemski in 1967 and David Ortiz in 2004 as the only Boston players to homer while driving in four runs in a World Series game.

"(Puig's homer) was a big blow, but everybody was pulling for each other, trying to get each other riled up," Pearce said. "This team has a lot of fight, and it was great to see how we responded. Our offense went silent for about 20-plus innings, so our pitchers did a great job."

The superlative Boston roster that won 108 regular-season games and then rolled through the 100-win New York Yankees and defending champion Houston Astros to win the AL pennant is now one win from this formerly tormented franchise's ninth World Series crown.

Enrique Hernandez hit a two-run homer in the ninth for Los Angeles, which could become the first team to lose the World Series on its home field in back-to-back seasons since the New York Giants lost at the Polo Grounds to the Yankees in 1936 and 1937. The Dodgers' bullpen flopped after manager Dave Roberts pulled starter Rich Hill, who dazzled for 6 1/3 innings of one-hit ball.

"We're not out yet," Roberts said. "Our guys aren't done. We've got our best going tomorrow and we're expecting to win a baseball game."

Less than 17 hours after Max Muncy's 18th-inning homer for the Dodgers ended the longest game in World Series history at 7 hours, 20 minutes, the teams were back on the field in Chavez Ravine. Game 4 took only 3 hours, 57 minutes, but had at least as many dramatic twists.

The Dodgers must overcome a 3-1 deficit to end their 30-year championship drought. Only six teams have accomplished the feat in the best-of-seven World Series, although the Chicago Cubs did it just two years ago.

After Hill left to a standing ovation, Boston's feast on the Dodgers' relievers began. By the time the Red Sox were done, all five relievers used by Roberts had yielded at least one run.

Moreland got the comeback started with his three-run shot off Ryan Madson — and only Boston's second hit of the game — after Xander Bogaerts and Holt drew walks.

Pearce then repeated the Game 3 feat of Jackie Bradley Jr., who also hit a tying homer in the eighth off Jansen. The longtime Dodgers closer has three blown saves and an extra-inning loss during the past two World Series.

Dodger Stadium was already rumbling with tension and fear when Holt doubled in the ninth off losing pitcher Dylan Floro. Devers sent him home with a go-ahead single — and three batters later, Pearce cleared the bases.

After Pearce arrived at second and Martinez was intentionally walked, Martinez used his hands to make a heart and mouthed "I love you!" to Pearce. Both players cracked up.

Devers added a big defensive play in the ninth when he slid to stop Manny Machado's hard grounder at third before throwing across the diamond for the second out. Craig Kimbrel retired Cody Bellinger to end it, leaving Puig in the on-deck circle.

After throwing six pitches in relief the night before, left-hander Eduardo Rodriguez largely stymied the Dodgers until giving up Puig's homer in the sixth. Rodriguez slammed his glove on the mound in frustration.

Los Angeles opened the scoring on a throwing error by catcher Christian Vazquez.

Joe Kelly was the winner after tossing two shutout innings.