Hockey legend Leonard "Red" Kelly, who starred for the Detroit Red Wings and Toronto Maple Leafs, has died at age 91.

But hockey was always at the heart of the things for the smooth-skating Kelly.

Kelly won eight Stanley Cups during a stellar 20-season playing career, moonlighting as a member of Parliament as he won NHL championships with Toronto in the mid-60s after starring in Detroit. He then took up coaching, making headlines in 1976 for "Pyramid Power" with the Maple Leafs.

Kelly, who died Thursday in Toronto at the age of 91, was both an elite defenceman and centre.

"Red was a devoted husband and caring father and grandfather and was tremendously proud of his many hockey accomplishments," the Kelly family said in a statement. "He was very moved by decades of love and support from Red Wings fans and was humbled to have his jersey retired earlier this year. 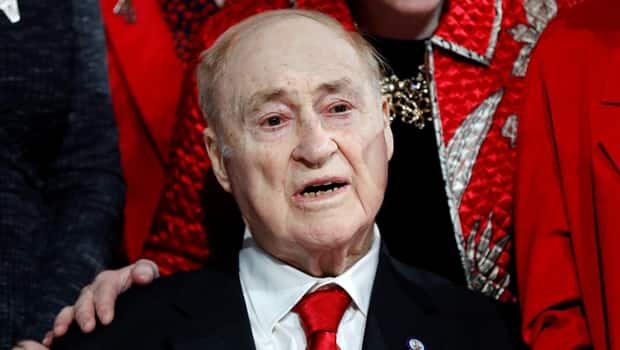 "We are comforted in knowing that he impacted so many people both at and away from the rink and know that his life will be celebrated."

NHL commissioner Gary Bettman said Kelly's career was "so storied and distinguished that it may never be duplicated."

"Red was the ultimate hockey renaissance man who seemingly could do it all," Bettman added.

The flying redhead spent nearly 13 seasons with the Detroit Red Wings as a defenceman before a trade to the Toronto Maple Leafs gave birth to the second half of his career as a centre for the next eight years.

Born Leonard Patrick Kelly on July 9, 1927, he grew up on the family farm in Simcoe, Ont.

His father wasted little time putting him on skates, and hours spent on outdoor rinks paid off years later for the mobile Kelly. He left home at 16 for St. Michael's College, a Toronto hockey hotbed that his father had attended.

Red Kelly was cut by three teams at St. Mike's but got a second chance after impressing one of the teachers in a game. He made the midget team as a third-liner and never looked back.

He somehow escaped the notice of the Maple Leafs, the team he grew up supporting with one ear glued to the radio and Foster Hewitt. But Detroit, thanks to scout Carson (Shovel Shot) Cooper, scooped up the mobile defenceman straight out of St. Mike's.

WATCH | Red Kelly, in 1994, talking about playing in Detroit: 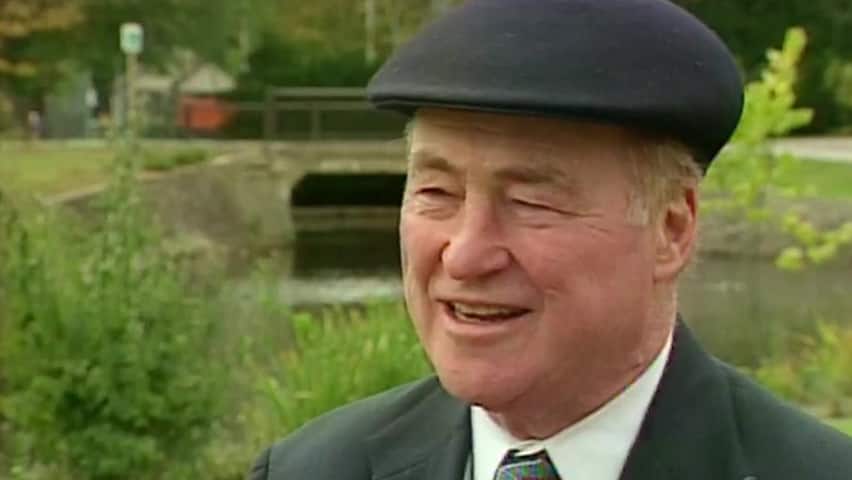 Red Kelly on first playing in the NHL, for Detroit

After helping St. Mike's beat Moose Jaw to win the Memorial Cup, he made his Wings debut at 20. Told he would be the fifth defenceman, Kelly didn't expect much playing time. But Doug McCaig broke his leg that Christmas, opening the door for the rookie.

When McCaig recovered, he was dealt to Chicago. Partnered with Bill Quackenbush, Kelly finished the 1947-48 season with six goals, 14 assists and 13 penalty minutes in 60 games. And Kelly soon earned a reputation for his ability to handle the puck, particularly with his skates when his stick wasn't available, and accurate passing.

Once Kelly secured the puck, he would take off toward the other end of the ice.

"He was the forerunner of the rushing defenceman," fellow Red Wing Ted Lindsay said in the Legends of Hockey biography of Kelly. "He and Doug Harvey."

As a rookie, he was handed a sweater bearing No. 20. The starters wore low numbers and next season he was told to wear No. 4.

Summers on the farm kept Kelly in shape. That was good news for the Wings and coach Tommy Ivan, who knew what he had on the blue line and made the most of him.

"Whenever he wanted me to go, I went," Kelly said.

Taught to stay out of penalty box

While Kelly enjoyed great success on the ice, failure came first. Detroit was beaten 4-0 by Toronto in the Stanley Cup final his first two seasons.

While a welterweight boxing champion at St. Mike's, Kelly managed to keep his temper in check. St. Mike's coach Joe Primeau taught him he couldn't win games in the penalty box.

Kelly took home the Lady Byng Trophy in 1951, 1953 and 1954 as the league's most gentlemanly player. In 1954 he was named the first winner of the James Norris Trophy as the NHL's top defenceman.

Despite the Wings' success during his tenure, Kelly had lived on a series of one-year contracts. The relationship between the star defenceman and autocratic Wings crumbled and he was told he had been traded to the New York Rangers in February 1960.

Rather than accept the enforced trade, the eight-time all-star retired.

"I started to work the next day with a tool company," he recalled in a 2003 interview with Kevin Shea. "But hockey was my whole life. I loved hockey ever since I was knee-high to a grasshopper."

His hockey retirement proved to be short-lived. The Maple Leafs talked him into joining them days later, and he agreed to a trade that sent defenceman Marc Reaume to Detroit.

Leafs coach Punch Imlach asked Kelly to move from defence to centre, knowing that the road to the Stanley Cup lay through the Montreal Canadiens and Jean Beliveau. Kelly accepted the challenge and flourished, developing a rapport with Frank Mahovlich.

Toronto lost to Montreal in the Cup final in his first season as a Leaf. And the Wings knocked Toronto out of the playoffs the next year. But the Leafs lifted the Cup in 1962, their first title since 1951.

Amazingly, from 1962 to '65, he doubled as an MP — commuting to Ottawa. Lester Pearson had asked him to run and, after the trade from Detroit, Kelly thought he should think of his future.

"I told Mr. Pearson I did not think it was possible to combine the two. He agreed!" Kelly told the Canadian Parliamentary Review in a 1989 interview.

"But Lester Pearson had a great ability to bring people together and the more we talked the more I liked and admired him," he added. "I decided I would do whatever I could to help him become prime minister." 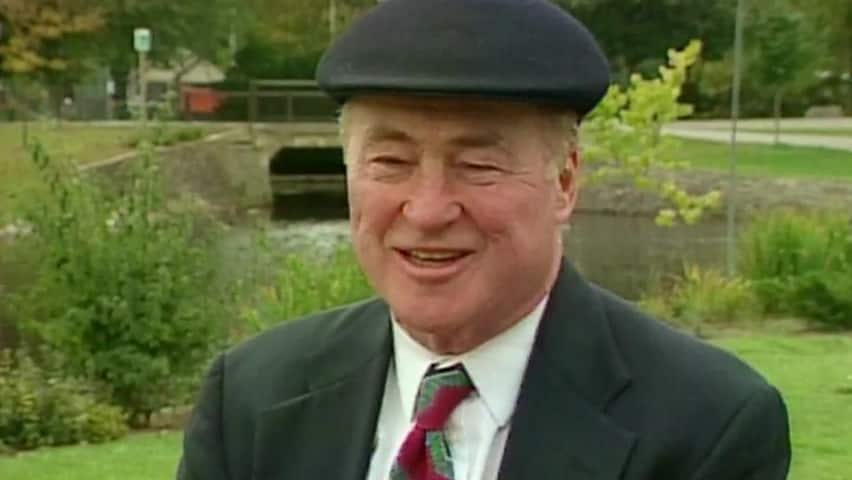 26 years agoVideo
1:40
Red Kelly talks to Midday about what it was like to play for the NHL and sit as an MP in Ottawa. 1:40

He was elected as the Liberal MP for the Toronto riding of York-West in 1962 and again in '63 when the Liberals defeated John Diefenbaker (Kelly beat Alan Eagleson, whose later fall from grace after heading up the NHL Players' Association was well-documented, during the '63 election).

The double duty took its toll.

During the '64 Cup final win, Kelly had his knee frozen before the final game and passed out in the shower afterward. He had to be in Ottawa the next day.

Still he had no regrets.

"That was a tremendous experience," he said. "I enjoyed those years. But it was tough doing both things. I thought I had one foot in the grave."

So he opted not to run again.

Kelly — who won a fourth Lady Byng in 1961 — retired a winner after his veteran Leafs team beat the Montreal Canadiens to claim the 1967 Stanley Cup. Toronto wanted him back, offering a four-year contract, but Kelly thought the time was right to move on.

He was inducted into the Hockey Hall of Fame in 1969, with the mandatory waiting period waived.

Kelly went into coaching after his retirement, first with the expansion Los Angeles Kings in 1967 and then in 1969 as Pittsburgh's second-ever coach. After being fired by the Penguins midway through the 1972-73 season, he got a job offer from Leafs owner Harold Ballard, who was in prison at the time on charges of fraud, theft and tax evasion.

Kelly spent three years behind the Toronto bench, leading the team to the second round of the playoffs three straight times. 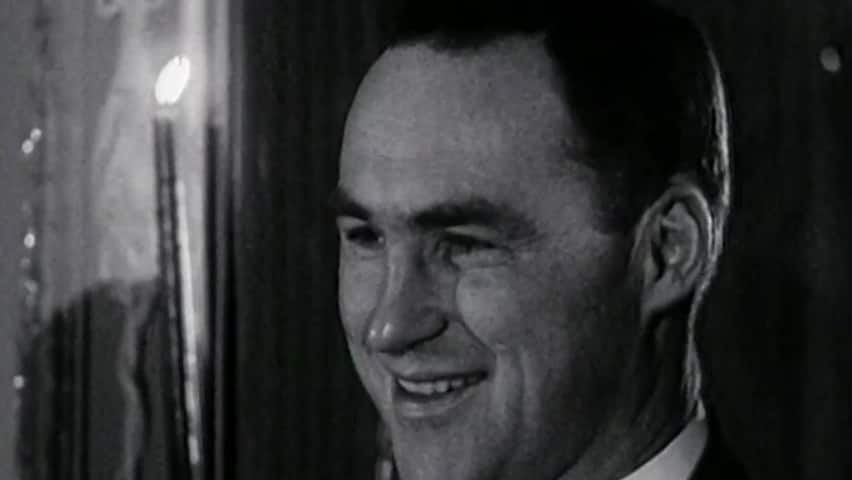 M.P. Red Kelly has signed hockey sticks for the House of Commons pages

1 year agoVideo
0:37
Hockey star and MP Leonard "Red" Kelly has a special gift for the page boys at their Christmas party. 0:37

He made headlines in 1976 when he unveiled "Pyramid Power" during a take-no-prisoners, second-round encounter with the Broad Street Bullies.

The Flyers had Kate Smith and her rousing rendition of God Bless America. Kelly countered with pyramids under the bench, after wife Andra had read of their supposed power — and a small pyramid under the pillow had helped daughter Casey beat a string of headaches.

After losing the first two games, the Leafs and Pyramid Power won Games 3, 4 and 6. Looking to deflect attention from his players and boasting owner Ballard, Kelly went public with Pyramid Power prior to Game 6.

Imbued with something special, captain Darryl Sittler scored five goals and added an assist in an 8-5 Toronto win. But the Flyers ultimately prevailed 7-3 in Game 7 and Kelly's coaching career was over.

Kelly ran an international aircraft maintenance company and several other business after his Hall of Fame hockey career.

His No. 4 jersey was honoured by the Leafs in 2006. In October 2017, the team added statues of Kelly, Mahovlich, Charlie Conacher and Wendel Clark to Legends Row outside the Air Canada Centre.

On Oct. 13, 2016, the Maple Leafs retired Kelly's No. 4, along with the numbers of 15 other players that were once honoured with banners hanging in Air Canada Centre, alongside the two previously retired numbers of Ace Bailey and Bill Barilko.

"For those of us who were lucky enough to have known or encountered Red, we will all miss his sharp mind and keen intellect," said Leafs president Brendan Shanahan. "He was a gentle man but a fierce competitor."

"I want to thank the fans who backed us and supported us in those years. Even if we lost, they still supported us," Kelly told the fans at Little Caesars Arena before the Wings' game against Toronto.