Alex Ovechkin knocked his own rebound out of midair and by Matt Murray with 1:07 remaining to lift the Washington Capitals to a 4-3 victory on Tuesday night in Game 3 of their increasingly testy Eastern Conference semifinal series with Pittsburgh.

Alex Ovechkin and Nicklas Backstrom have spent their entire careers chasing the Pittsburgh Penguins and shouldering their own franchise's onerous history of playoff failures. 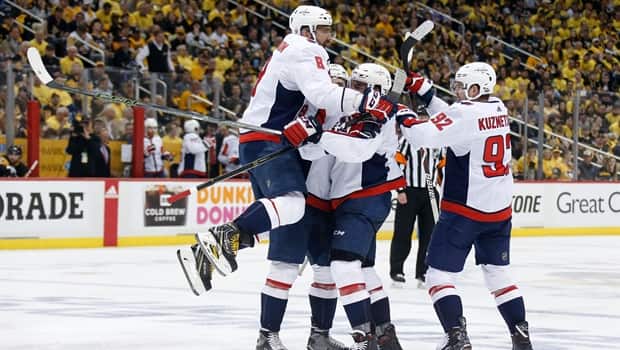 Ovechkin knocked his own rebound out of midair and by Matt Murray with 1:07 remaining to lift the Capitals to a 4-3 victory on Tuesday night in Game 3 of their increasingly testy Eastern Conference semifinal series with Pittsburgh.

The Russian star, however, stayed with the play and with Murray out of position, he deftly flicked it into the open net to give the Capitals a 2-1 series lead. 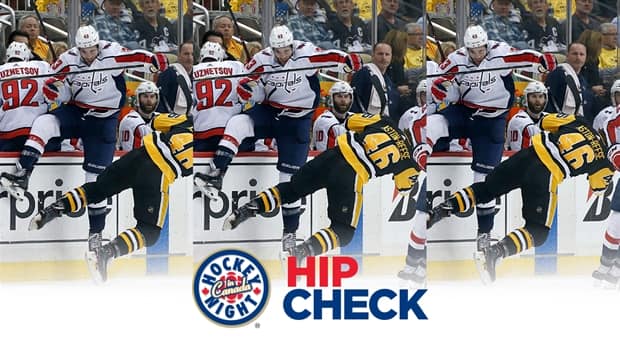 3 years agoVideo
1:06
Capitals' winger Tom Wilson was back at it again in Game 3 with a massive hit on Zach Aston-Reese forcing him to leave the game. 1:06

"It's a good thing I didn't raise my arms up [after the first shot], you know to [celebrate] the play," Ovechkin said after scoring his eighth goal of the playoffs. "Got lucky."

Matt Niskanen, John Carlson and Chandler Stephenson also scored for Washington, which improved to 4-0 on the road in the postseason. Braden Holtby finished with 19 saves. Backstrom had three assists, including the helper on Ovechkin's winner.

"It's huge, huge goal," Ovechkin said. "Obviously for our team, you know we want to win tonight and we did. It doesn't matter what, it doesn't matter who scored. We sacrifice. We play hard. And we have to do the same moving forward."

Game 4 is in Pittsburgh on Thursday night.

Jake Guentzel had a goal and an assist for Pittsburgh. Sidney Crosby and Patric Hornqvist also scored, but the Penguins lost consecutive playoff games for only the fourth time since the start of their run to consecutive Stanley Cups began in 2016.

Pittsburgh also lost forward Zach Aston-Reese to a broken jaw and a concussion following a violent collision with Washington's Tom Wilson at the game's midway point.

Aston-Reese was stickhandling near the Washington bench when Wilson slammed into him, sending the 6-foot-4 Aston-Reese to the ice.

Wilson was not penalized on the play, the second time in as many games he was not disciplined for a borderline hit.

Pittsburgh defenceman Brian Dumoulin went into the league's concussion protocol after Wilson blindsided him in Game 2 while Dumoulin was bracing for a collision with Ovechkin.

The NHL's Department of Player safety didn't ask Wilson to explain himself during a hearing and Dumoulin was back in the lineup to start Game 3.

Both teams stressed the need to move forward with so much at stake. But that was before Aston-Reese slowly made his way off the ice, flinging one of his gloves at the Washington bench in frustration, his jaw mangled and his status for the rest of the postseason uncertain.

The initial point of contact was hard to discern, even on replay. Was it the shoulders? The head? Either way the tenor changed considerably.

Asked afterward about the hit, Pittsburgh coach Mike Sullivan replied "at some point we hope the league might do something."

No action against Wilson

Maybe not. Officials conferred for several minutes before deciding to take no action against Wilson.

"They all got together and they said, `You know what, we've got a good, clean check here,"' NHL on-site supervisor Paul Devorski said through a pool reporter.

Stephenson tied the game shortly after the sequence and a crescendo of pushing, shoving and jawing followed.

Crosby put the Penguins back in front with 3:33 left in the second when he took a pretty pass from Guentzel — who occupied three Capitals before sliding the puck to his teammate — and buried it into an open net.

Niskanen, who spent four seasons in Pittsburgh before signing with Washington in the summer of 2014, blasted a one-timer by Murray 5:06 into the third to set up the finish.

Ovechkin and Backstrom's two-on-one gave the Capitals the series lead over Washington for the first time since they won Game 1 of the 2016 Eastern Conference semifinal.

Of course, the Capitals lost that series. As they almost always do when the Penguins are on the other side of the ice.

The champions have proven to be an impossible out during their current reign. Three tight games in, Washington is well aware there's little margin for error.

"It's a funny game," Niskanen said. "Boy, sometimes the puck takes a different bounce and the score can be completely different."